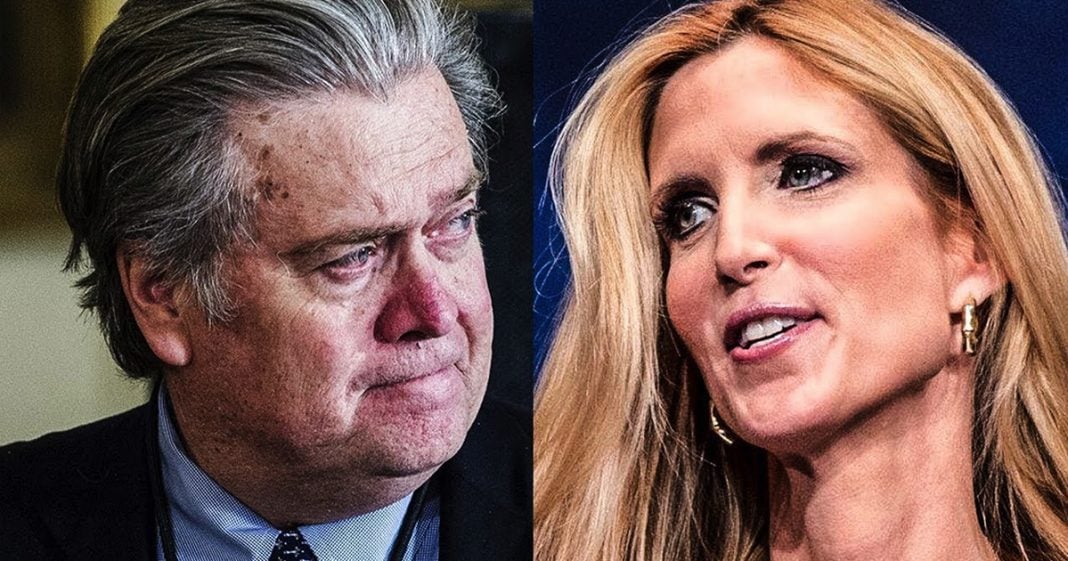 After Democrats announced that they had reached a deal regarding DACA with President Trump, the right wing online world went into a full frenzy, with Ann Coulter calling for Trump’s impeachment and Breitbart referring to him now as “Amnesty Don.” Trump denies that any deal was reached, but the damage is already done. Ring of Fire’s Farron Cousins discusses this.

As it turns out, we have actually finally found an issue that would make Donald Trump’s hardcore alt-right base finally lose support for him, and that issue happens to be working with Democrats on things like DACA.

Now, Democrats on Wednesday evening tweeted out that they had reached a deal with Donald Trump on DACA and Dreamers. They were going to save these people. They weren’t going to be mass deported, and so immediately the right wing, hardcore blogosphere freaks out. Breitbart started referring to Donald Trump immediately as “Amnesty Don” and their followers immediately turned on the President. Ann Coulter went a little further and said that “Who doesn’t want him impeached now?” So, Ann Coulter, after this deal was reached, was ready to go ahead and impeach Donald Trump because he wanted to keep some immigrants in this country.

And the story doesn’t even stop there. It only gets more interesting because Trump had to come out, after he saw this huge backlash and when the Democrats had said they reached a deal, and he says, “No, no, no, no. We didn’t reach a deal. There’s no deal. We didn’t finalize anything. It’s not done. We’re still talking. Please don’t hate me, alt-right.”

But at this point, the damage is done. The perception that Trump might have a heart, at least on this one area, and it’s a very tiny heart if it even exists, is what pissed off those Breitbart, Ann Coulter wannabe followers. They don’t want Donald Trump to show any compassion whatsoever to immigrants in the United States. They want them gone, and the only reason they want them gone is plain, good old fashioned racism because they’re not coming over here and taking our jobs. In fact, when they go away, we have an influx of fruit that rots on the vine, vegetable rotting in the field because nobody in America will take those jobs, or is able to do those jobs.

So, yeah, we need them here. Republicans would understand that if they’d pick up a newspaper every now and then, but they don’t want to do it. They know that that person’s shade of skin is slightly darker than their own, so they must be bad. That is the only reason they want these people out of here. It’s the only reason they voted for Donald Trump. And now they think that he has made a deal with Democrats that currently may or may not even exist. So they are willing, as Coulter said, to go ahead and impeach him.

So, I sincerely hope for the sake of this country that Trump does reach a deal on this, and not just because it’s going to make his base turn on him, or because Ann Coulter wants him impeached, but because it’s the right thing to do. These Dreamers, as they’re called, did not come over here willingly. They were brought over here as children. They had no papers. They had no way to come in here legally if their parents didn’t, so it’s not their fault. We could at least have a little bit of collective sympathy for these people and offer them a path towards citizenship when they’ve come here, gone to school, gotten jobs, helped pay taxes, and made this country better.

But Breitbart, Ann Coulter, and all of the alt-right, they don’t want to see that happen. All they want to see are black and brown people deported to wherever the hell they came from so that they can make America as lily white as they are.