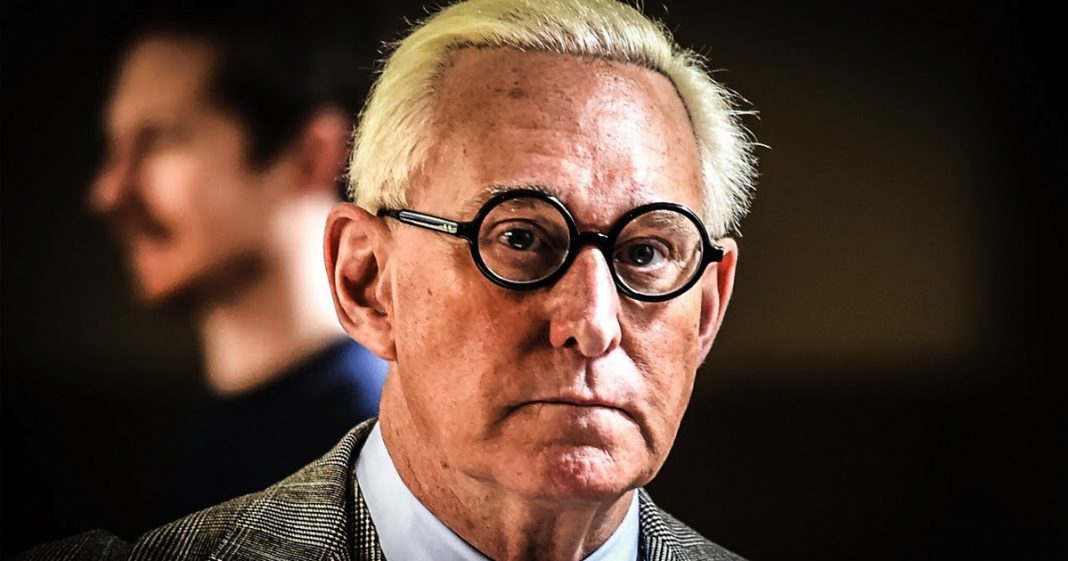 Roger Stone, one of Donald Trump’s closest allies and advisers, issued what could be perceived as a death threat against politicians who support Trump’s impeachment: If you are in favor of it, you are putting your own life at risk. Stone threatened a new civil war if impeachment takes place and an “insurrection” the likes of which this country has never seen. Ring of Fire’s Farron Cousins explains why these comments not only prove the need for Trump’s impeachment, but they should also land Stone in prison.

According to a recent interview with TMZ, longtime Trump advisor and one of his closest allies, Roger Stone, has warned that there will be some kind of civil war in the United States should Donald Trump ever be impeached, but aside from that, which is something we’ve actually heard from people on Fox News in the past, he didn’t just go as far as to say there’s going to be a civil war. No. He actually warned that any politician that votes in favor of Donald Trump’s impeachment could be endangering their own lives, which is, depending on how you perceive it, pretty much a death threat against people who vote for Donald Trump’s impeachment.

Here is the exact quote from Roger Stone:

“Try to impeach him. Just try it. You will have a spasm of violence in this country, an insurrection like you’ve never seen. The people will not stand for impeachment. A politician that votes for it would be endangering their own life.”

There are very specific laws in this country that deal with this kind of speech, and I dare say that this is treasonous, traitorous rhetoric on behalf of Roger Stone, the kind of rhetoric that should at least warrant some kind of FBI investigation into what this man is saying and what he is threatening to do among his followers. This is dangerous. It’s a very dangerous way to be speaking in this country, and yes. We do have laws that govern this, and yes, it is very likely that if somebody were to actually investigate it, and I know they weren’t, or won’t, excuse me, he could end up in prison for saying things like this. You can’t warn or threaten of an armed insurrection here in the United States without it being considered treason because that is exactly what it is. Furthermore, 40% of the American public actually supports impeachment at this point, and we haven’t even gotten the conclusions of the Bob Muller investigation that increasingly looks more and more likely to involve Donald Trump in some way, shape, or form.

The Trump supporters have lost their damn minds. The people that he surrounds himself with, Donald Trump, are absolutely nuts. Now keep in mind too, this man Roger Stone threatening this armed insurrection against the United States, is the same man who just a few days ago, agreed with Alex Jones that somehow Donald Trump is being drugged via his diet cokes so that he is more pliable and compliant and less volatile in front of the American public, and that’s why his mental capacity seems to decline towards the end of every day.

Roger Stone is not a stable human being. He is not someone that anyone in this country needs to be listening to, certainly not the president of the United States. He is a very dangerous person, and as such, should be treated like a very dangerous person and should be locked away from society where he cannot cause any harm, or inspire his followers to mount some kind of armed insurrection against the federal government of the United States.