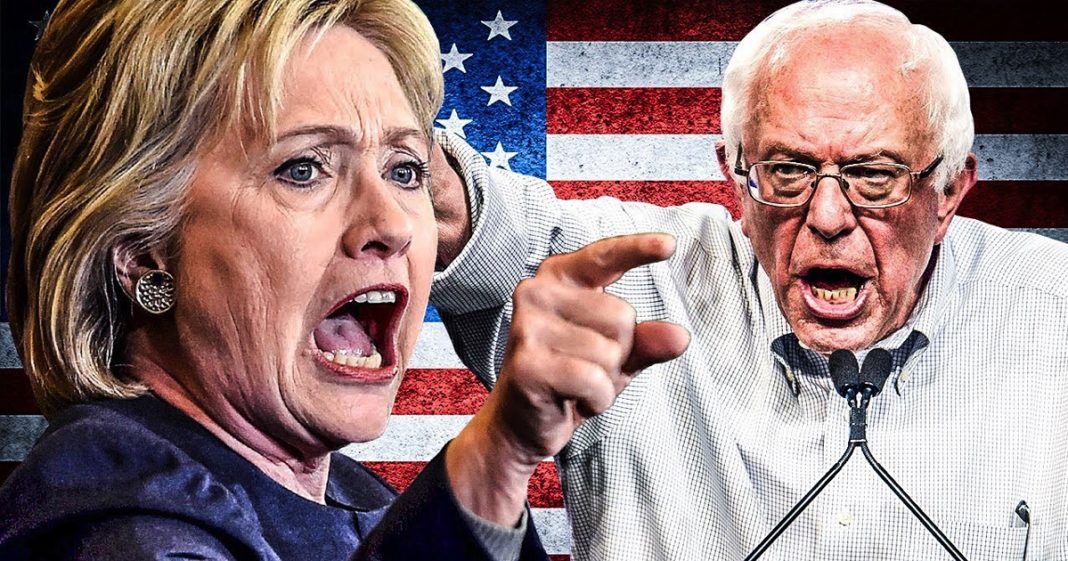 Hillary Clinton is on her book tour, which a lot of people are describing more as a “blame tour,” and she’s letting the world know just how much she despises Bernie Sanders. During an interview with Pod Save America, she said that the Democratic Party needs to avoid becoming like Bernie Sanders because he has no clue what he’s doing. Ring of Fire’s Farron Cousins discusses Hillary’s sour grapes and why her backwards way of thinking shouldn’t be welcome in the Party.

Hillary Clinton, as most people know is on her book tour right now, which would be more appropriately her blame tour where she’s talking about how Bernie Sanders, James Comey, Russia, Trump, the weather and everything in between somehow lost her the election, while glossing over the fact that she completely ignored the entire American Midwest during her campaign, choosing instead to meet behind closed doors with wealthy donors. Nonetheless, she appeared on the pod Save America podcast earlier this week where she laid out how pissed off she really is at senator Bernie Sanders. In fact, the overall takeaway from her interview according to the Washington Post that has been pro-Hillary is that Hillary Clinton is telling us don’t be like Bernie Sanders.

That’s right. Somehow, even though this very week Bernie Sanders has gotten 15 mostly establishment democrats to sign on as co-sponsors for his Medicare for All plan, Hillary Clinton still says don’t be like him. Boy, he was such a bad apple, Hillary Clinton says he dragged this process out. He and his supporters were so mean to me. Completely forgetting how horrible her and her supporters were to Barack Obama in the 2008 election after she lost that nomination and a lot of people talk about, “Well, 12% of Bernie people didn’t vote for Hillary in the general.” Well, more than 12% of Hillary supporters from 2008 didn’t vote for Obama in that same year. Your argument is moot. Not to mention the fact that you actually had a lot of non-Democrats who supported Bernie Sanders in the primaries who would have gone to Trump anyway.

Nonetheless, that’s neither here nor there. It’s just a healthy little piece of trivia that you may need to know if you ever get in an argument with one of these establishment types but Hillary Clinton is out there right now at a time when Democrats are getting behind Bernie Sanders and trying to be like him and she’s telling us to not be like him. Don’t push for universal healthcare. Don’t push for debt free college. Don’t push for all these pie in the sky dreams that are impractical, she said during the podcast. Here’s the thing that establishment Democrats, the Clinton apologists, I guess they don’t understand. I guess they’ve never done any research at all in to other countries because yeah, debt free college can be a reality. Yes we can afford it. Other countries do it. It’s not like it’s something we dreamt up and we’re like, “What if students never had to pay for college?” No, it’s based on European models. They do it and it’s pretty damn successful.

Same thing with universal healthcare or Medicare for all. Other people do it. They don’t seem to be having any problems funding it or whatever. Why would the United States with as smart as we are, as good as we are, not be able to figure out the exact same thing that so many other countries are doing. I think that’s actually more insulting than saying you just flat out don’t support it because you’re basically telling us, Hillary, that we are too stupid to figure out how to do the exact same thing that dozens of other countries around the globe have perfected. It’s not that hard, folks. The bottom line is this. The Clinton apologists out there are not going to go away. All we can do is ignore them. I know I had said in the past I wasn’t going to talk about Hillary Clinton anymore, but I saw this story of her saying don’t be like Bernie and it ticked me off to a level that I have not reached in quite a long time.

This is not the path forward for the Democratic party. I know Bernie is not a Democrat, but his supporters could be if the Democratic party embraces his principles. There’s a reason he’s consistently listed or voted as the most popular politician in the United States. Again, it’s not because of his personality or his charming good looks. It’s because of his policies. If the Democratic party had a brain, they would absolutely jump on board with these and stop telling people that they’re not possible because they absolutely are. Anyone who says otherwise is lying to you or worse, just trying to sell a few more books.