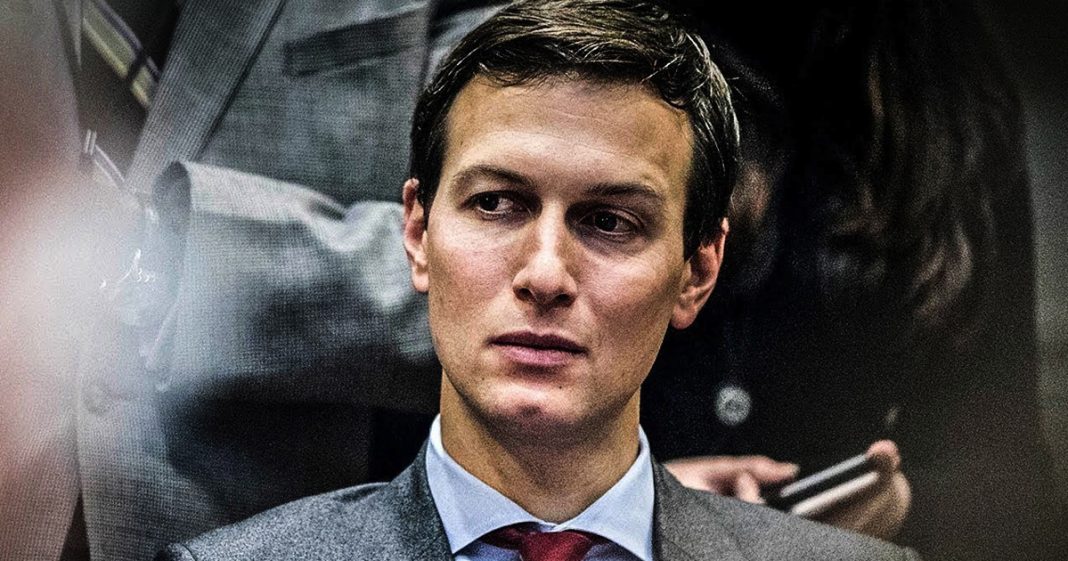 According to a new report, lawyers for Donald Trump warned the President back in June that he should remove Jared Kushner from his administration because of Kushner’s ties to Russia. The president didn’t listen, and things went downhill from there. Ring of Fire’s Farron Cousins explains why Trump didn’t want to fire Kushner and how that decision could signal the eventual end of his presidency.

According to a new report by The Wall Street Journal, Donald Trump’s lawyers back in June wanted him to get rid of Jared Kushner from the Trump administration, or at least ask Jared Kushner to step down, because those lawyers were concerned about Kushner’s very cozy relationship with people from Russia, perhaps members of Russian administration, and they didn’t want any of that to somehow affect Donald Trump or end up roping him into the Bob Mueller investigation that’s currently going on. Trump decided not to do that. He didn’t listen to his lawyers, he didn’t listen to the public, to Congress, all of the people in this country telling him to revoke Jared Kushner’s security clearance — which, for the record, he still has — even though we’re finding out more and more that, oh, Kushner met with another Russian. Kushner met with people he shouldn’t have. Kushner was trying to work deals while still a member of the Trump administration that could be seen as definite conflicts of interest.

Jared Kushner is a huge liability for the Trump administration, but in true Donald Trump fashion, he didn’t want to listen to people who were smarter than him. He didn’t want to listen to the American public, even those that don’t like him, warning him of how dangerous Jared Kushner would be for his administration, and that’s why he’s in the predicament that he’s in today. Maybe he did it because he didn’t want to upset his daughter. However, we’ve seen him do plenty of things that allegedly go against what Ivanka believes, so there’s no reason to think that he would keep Kushner on board just because he doesn’t want to make his daughter upset. Furthermore, if Ivanka thought that Kushner was hurting her father’s presidency, she should be the first one to ask her husband to, “Hey, maybe you should resign before you take down the whole damn family.”

Kushner’s role in the Trump administration, while pretty much unclear to the public, it’s clear to the Trump administration, to the Trump family, why Kushner is still in that White House. They think he’s good for business. They don’t care about the investigations. They don’t care that he could take down the whole administration. All they know is that he’s out there trying to work on some business deals that eventually is going to make this family a lot of money, and if it comes at the expense of big daddy Don going to prison, the children don’t care. Everyone in that family, including Kushner, who married into it, is out for themselves. I mean, that’s one of the biggest problems we have right now with these people is that none of them, even though they’re all family, even seem to care about one another. All they want to see is how much money they can get out of it, how much access they can get out of it, and how many connections they can make from being a part of that Trump family.

This is disgusting behavior. It’s something we might expect maybe from a trailer park here in the United States, not from the family that occupies the White House, certainly not to the likes of anything we’ve seen in modern American politics, but that’s what Donald Trump and Jared Kushner and Ivanka and Don Junior and Eric and all of them are. They’re selfish jackasses who took these positions, currently have the positions that they have even outside of the Trump administration, because they wanted to see how much more money they could make. It doesn’t matter if it comes at the expense of Trump’s presidency, or Jared Kushner’s freedom, because that kid could very much likely end up in prison. All that matters is that they get theirs, to hell with everybody else.