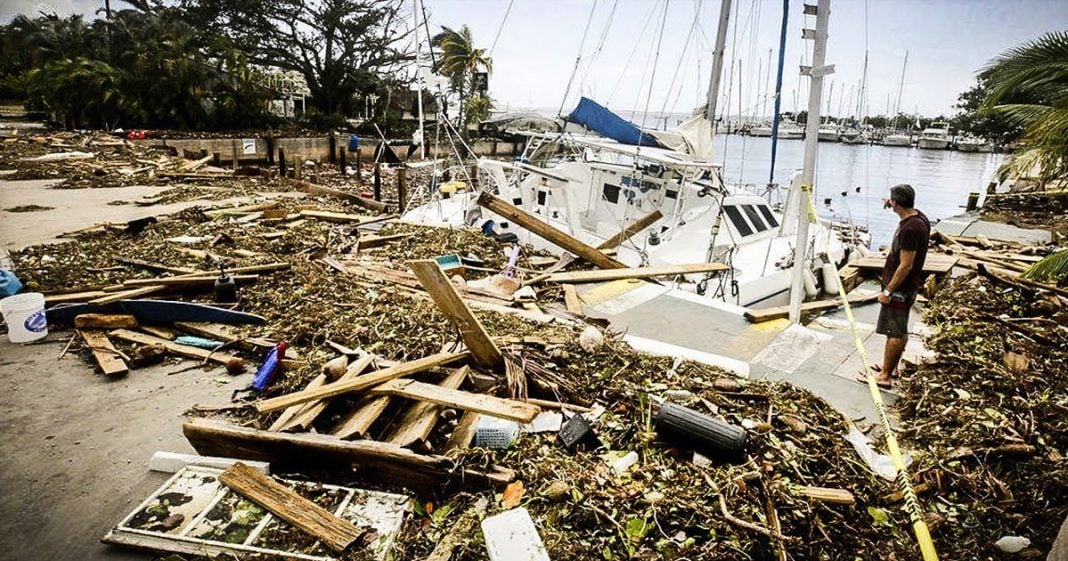 As Hurricane Irma approached the coast of Florida late last week, two Florida congressman serving in the U.S. House of Representatives voted against an aid package for victims of both Hurricanes Harvey and Irma. They claimed that the package amounted to “generational theft”, even as their own constituents faced one of the largest hurricanes ever recorded. Ring of Fire’s Farron Cousins discusses this decision and why it should cost both of these men their jobs.

As most people are fully aware, the United States has been suffering from a slew of natural disasters within the last month. Of those disasters, hurricanes Harvey and Irma have proven to be some of the most destructive storms that have hit the United States, at least within the same month span, in quite some time. Irma has devastated Florida. Now, she’s made her way through Georgia, South Carolina, causing widespread destruction. Harvey, as we all know, caused massive flooding in the city of Houston, and Galveston, and other areas that were impacted by this storm.

Congress, rightfully so, has been working on aid packages to help people put their lives back together and to help rebuild the areas that were devastated by these natural disasters. It would make sense, for members of Congress, whether Democrat or Republican, to vote in favor of these aid packages. This isn’t reckless government spending. This is helping American citizens continue to live, to give them their homes back, to give them their schools, and roads, and bridges back. Remember, it’s not just personal property that was lost here. Federal property, roads, bridges, police departments, schools, absolutely obliterated in this storm.

Don’t tell that to two Republican representatives from the state of Florida, Matt Gaetz and Ted Yoho, because those two idiots, from the state of Florida that was just devastated, decided to vote against those aid packages. Why? Well, as Matt Gaetz tells us, because it would be generational theft. The government just can’t be spending all this money on things. “It’s the government’s job to take care of people in times of crises,” according to Gaetz, “but come on now, we’ve got to have a limit on how much we can spend.”

For the record, Matt Gaetz, is the idiotic congressman who originally proposed the piece of legislation to completely abolish the EPA. Unfortunately, he also happens to be my representative right here in the Florida panhandle. To be honest, I am very seriously considering launching a campaign against him for 2018, because I’m so pissed off at everything I’ve seen this idiot do since the day he came into office. Gaetz, your state, the majority of your state, maybe not our district right here, has been devastated by Hurricane Irma. Same thing with you, Ted Yoho. Your district actually did get pretty much destroyed, and you have the audacity to go up there in Washington DC and say, “You know what? You guys don’t deserve any aid. What about future generations? What about the rest of the country?”

Let me tell you something. If you think you have enough money to start giving shit away to millionaires and billionaires in the form of tax breaks, but you don’t have enough money to take care of people who lost everything, then you’re in the wrong business, then this country has the wrong priorities, because that’s what Republicans are trying to do. They’re saying, “To hell with the victims. We’re going to go ahead and give more money to millionaires, and billionaires, and corporations who are polluting and destroying this country both physically and economically, because we don’t give a damn about you. Oh. You lost everything, and the federal government is out millions, possibly billions, of dollars because we can’t repair the roads and schools and bridges. Well, oh well. These millionaire donors of mine need tax breaks.” That’s what these Republicans are saying.

I sincerely hope that both of these men, that this is their last term in Congress. They are selfish, disgusting, immoral. I don’t even want to continue that list of adjectives because it’s going to get a little not safe for work if I have to. These are horrible human beings, Matt Gaetz and Ted Yoho. That’s the bottom line. They want to give more money to millionaires while people in their own state are suffering, wondering how they’re going to put their lives back together, many not ever be able to fully do that. But, that’s what you get when you vote Republican.