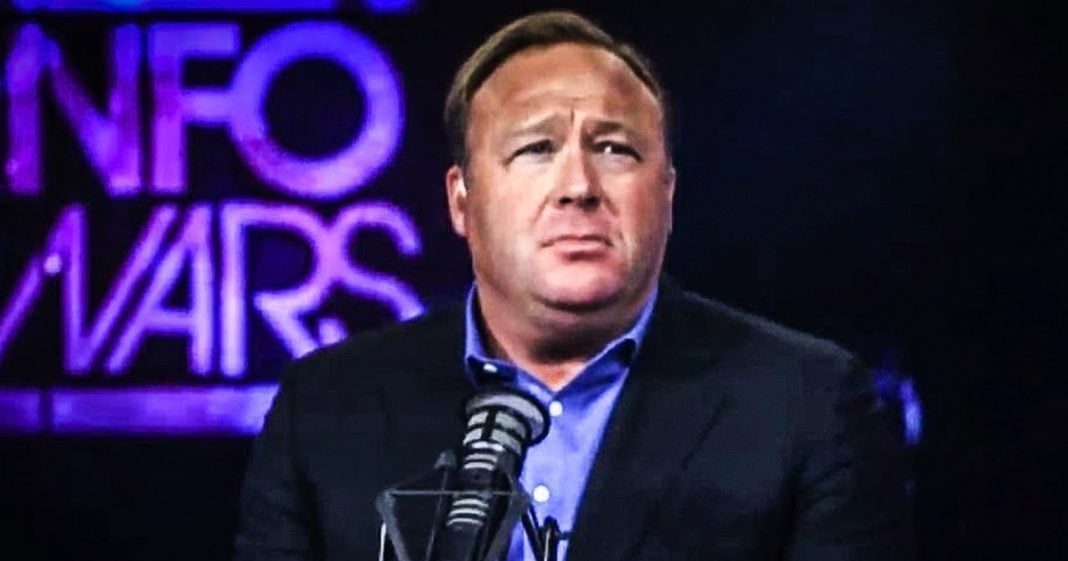 President Trump’s mental faculties have been called into question countless times during his short tenure as President, with psychiatrists and doctors warning that there could be something seriously wrong. And now Trump’s good friend Alex Jones has hopped on the bandwagon, but rather than attributing Trump’s mental decline to a disease, Jones says that Trump is slowly being poisoned by people within the government. Ring of Fire’s Farron Cousins discusses this.

Pretty much since Donald Trump was sworn in as president of the United States, experts have been giving their opinions on his mental stability or, rather, his mental instability. He’s exhibited signs of possible narcissistic personality disorder and some experts say he’s actually exhibiting signs of Alzheimer’s disease because his mental faculty seem to decline later on it day, which is a hallmark sign of Alzheimer’s. Nonetheless, experts all over the country have been offering their off-the-cuff, off-the-record, diagnoses and usually these get dismissed as some kind of liberal conspiracy theory, trying to invoke the 25th amendment.

However, this week, Alex Jones, good friend of Donald Trump, has offered his own theory as to why Donald Trump is clearly having these mental declines every day. Take a look at Alex Jones’ explanation of what’s actually happening to Donald Trump behind the scenes.

Alex Jones: Ladies and gentlemen, ladies and gentlemen. I was told this by high level sources that it was evident, and especially after Reagan was shot in his first year in office when he was acting like Trump and doing the right things, that he never really recovered. They gave him cold blood in his transfusion that causes brain damage. They slowly gave him small amounts of sedatives. It’s known that most presidents end up getting drugged. Small dosages of sedatives until they build it up. Trump’s such a bull. He hasn’t fully understood it yet, but I’ve talked to people, multiples ones, and they believe that they are putting a slow sedative that they’re building up that’s also addictive in his Diet Cokes and in his iced tea and that the President, by 6 or 7 at night, is basically slurring his words and is drugged. They first had to isolate him to do that, but yes, ladies and gentlemen, I’ve talked to people that talked to the President now at 9 at night. He is slurring his words. I’m going to leave it at that. I’ve talked to folks that have talked to him directly.

That’s right, folks. It’s not anything that we need to take seriously, like perhaps a mentally unstable president or somebody who is suffering from Alzheimer’s. No, no, no, no, no. He’s drinking drugged Diet Cokes and it’s just kind of sedating him so that he goes to bed or that he’s more easily controllable by the government that he’s actually running.

Look, there’s quite a few holes, obviously, in Alex Jones’ theory here. But what’s more interesting is the fact that his audience absolutely eats this up. He even has a Trump confidante, Roger Stone, spouting these same talking points that, yeah, Donald Trump is clearly being drugged late in the afternoons to help him be more pliant and make him a little more restful.

Now, there is absolutely no evidence to suggest any of this. Jones says that he has high level sources giving him this information. But this is also the same man who argued in court that his entire persona on the air is just an act. He doesn’t mean any of it. He doesn’t believe any of it. It’s just a character that he’s playing.

But the real damage here, there’s actually two sides of this damage. One is that it undermines a very serious issue and that is, is Donald Trump mentally capable of fulfilling the duties of the presidency? The second is that it poisons the discourse among American citizens when you have a large part of the country that will believe what Alex Jones says and will honestly think that the President is somehow being drugged with his Diet Cokes or whatever drinks they’re able to fill him up with. This is not acceptable here in the United States. What’s even more unfortunate about all of this is that there are no laws that say that Alex Jones could be prosecuted for this or that we could shut him down because he’s spreading these hateful and politically hurtful lies every day. You can legally do that, unfortunately, in this country. I think that’s an area of free speech that perhaps we ought to consider curtailing when it causes real harm to the American public and to American political discourse.

Alex Jones is a cancer to American politics and he needs to be removed. We cannot have intelligent discussions in this country. We can’t have discussions about very serious issues like Trump’s mental faculties, climate change, school shootings, because you have idiots out there like Alex Jones who want to offer up their crazy conspiracy theories and get their followers to go along with it, undermining the overall issue and preventing real progress, real change, or even real discussions about this that we actually need to be addressing. Alex Jones is responsible for that and it’s time to pull him from the airwaves.