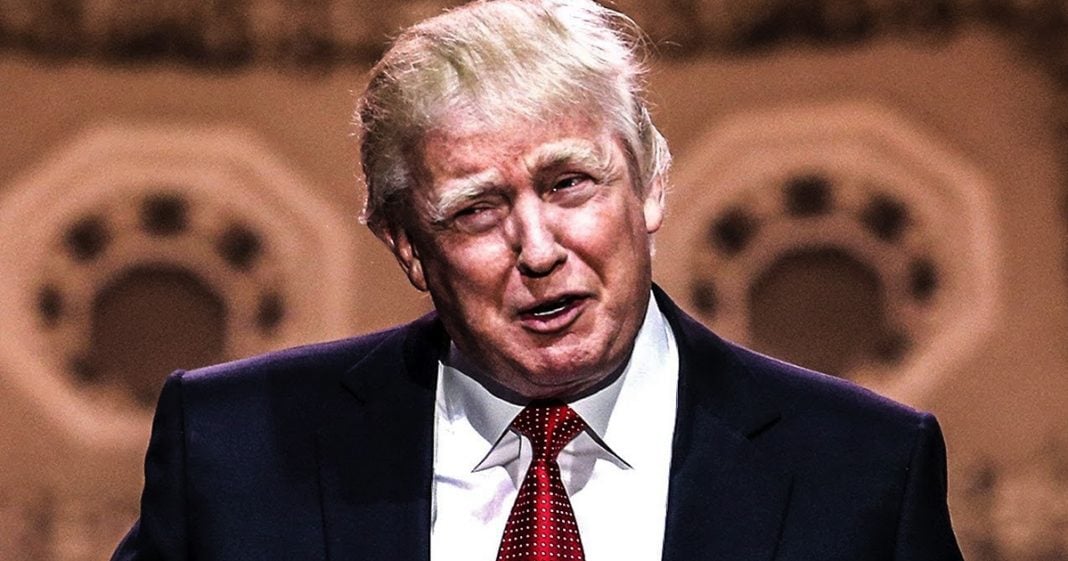 During a cabinet meeting that took place on the eve of Hurricane Irma slamming into the state of Florida, President Trump said that the recent spate of hurricanes show that we desperately need to speed up cutting taxes for the wealthy. He offered no reasoning for linking this two completely separate issues, but he’s made it clear that giving the wealthy more money is his priority. Ring of Fire’s Farron Cousins discusses this.

This past weekend as hurricane Irma approached the state of Florida, Donald Trump did what he does best and he ran away from any problem. While he ran away, he did hold cabinet meetings at wherever it was he was that wasn’t Washington DC. He told the crowd there, told his cabinet officials everything, he said, “To create prosperity at home we’ll be discussing our plan for dramatic tax cuts and tax reform. And I think now with what’s happened with the hurricane, I’m gonna ask for a speed up. I wanted a speed up anyway, but now we need it even more so.” So, somehow in Donald Trump’s twisted, delusional, little brain, he thinks that the fact that we’re having horrible hurricanes right now is evidence that somehow we need to work on tax reform, which is cutting taxes for the wealthy. That’s what these storms mean to Donald Trump. Because south Florida got hit by a hurricane, because Galveston and Houston got hit by a hurricane and are flooded, we’ve gotta cut taxes for the wealthy.

Now there is no way in any stretch of the imagination that enacting this tax reform package that Republicans and Donald Trump wanna push through, which is nothing more than tax cuts for the wealthy and for businesses, there’s no way that would help a single thing that’s currently happening in the southeast of the United States. The only thing that would help them, the areas affected by these storms, was if we completely abandoned their disastrous tax reform plan and, instead of handing that money back over to the wealthy elite, we handed it to groups like FEMA. To the Coast Guard. To the people that are actually out there trying to help and put peoples’ live back together and save people’s lives in the ongoing devastation and destruction.

Instead, Donald Trump and the Republicans wanna cut those agencies. They wanna take money away from them. Some of it’s gonna go towards Donald Trump’s disastrous border wall while the rest of it’s gonna go to the wealthy elite and corporations in the form of tax breaks. People have died over the last several weeks due to natural disasters here on US soil. Died. Because we weren’t prepared because we couldn’t respond properly because we didn’t have the resources in place because we didn’t take the necessary precautionary steps because Trump rescinded flood rules and infrastructure rules regarding flooding that could have helped to prevent some of this.

Instead of working on any of that, instead of helping first responders, instead of helping American citizens who are in trouble, we wanna give more money to the wealthy elite. We wanna give more money to wealthy Republican donors. We wanna give more money to greedy corporations who aren’t paying a damn cent each year in taxes anyway. That’s what Donald Trump says. Somehow he’s saying that the fact that these hurricanes are happening just shows that we need to speed up this process because, I guess, those wealthy people up on Wall Street are getting a little antsy wondering where their big tax break dollars are. Hell, they spent a lot of money funding Republican politicians, it’s time for them to get their payback now. So enact those corporate tax cuts, those tax cuts for the top 1% immediately before, I guess, a hurricane comes and wipes out those people too.