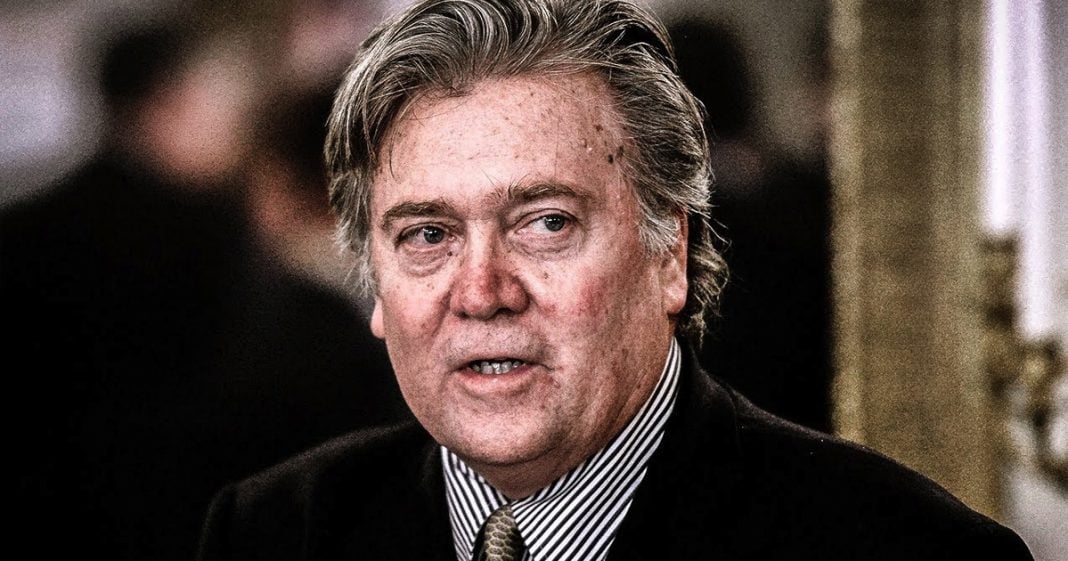 Former Trump advisor and current Breitbart propagandist Steve Bannon is planning on running primary challengers to key Republican lawmakers in order to shift the Party even further to the right. Bannon has been empowered by Trump and now he wants to take over the whole Party. Ring of Fire’s Farron Cousins discusses this.

Donald Trump’s former chief strategist, Steve Bannon, is attempting to take over the Republican Party. It was announced recently that Steve Bannon is going to be running primary challengers to several key Republicans including Senators Dean Heller and Jeff Flake from Arizona. They have both expressed some disinterest with what Donald Trump has done. And so, Steve Bannon says, “To hell with it, I’m meeting with the Mercer family,” a group of wealthy GOP donors, “And we’re going to find a replacement. Somebody to primary these people and get them out of office so we can get more Trump loyalists. But more importantly, more Breitbart loyalists in office here in the United States.”

Bannon has also decided he’s going to step into the Alabama Senate race where he’s supporting former Alabama Supreme Court Justice, Roy Moore, the guy who’s consistently been sued and lost for his decision to put the 10 Commandment in front of his court room over Luther Strange, who is the Republican establishment favorite. So Bannon’s weighing into that one, as well. But what’s happening over all here is that Steve Bannon is trying to remake the entire Republican Party and push it further to the right. And not just in terms of policy, right? We all know what Steve Bannon really stands for, we know what Breitbart stands for. It’s all about the alt-right. Those people that you don’t want to talk about, those people that showed up in Charlottesville and ran over a woman and killed her with her vehicle.

Those are the people that Steve Bannon, and Breitbart, and Donald Trump are playing to right now. Those are the people that they want to help put in the office. Maybe not the same caliber, but close enough. That’s what Steve Bannon and Breitbart have always been about. It’s about that hardcore, borderline white nationalist group who pay attention to Breitbart, who believe Breitbart. Those are the ones that Bannon is trying to get in office, and he’s doing it at the expense of the Republican Party itself. Bannon is influential, unfortunately, as is Breitbart. And unfortunately, again, Donald Trump seems to have a little bit of sway over the party at the moment.

So if he comes out and supports somebody and Bannon supports him, you got Breitbart behind them, you got the Mercer money flowing in to the opposition, that’s not going to end well for the Republic establishment. And what it’s going to do is signal the final death throws, the death rattle, really, of the Republican Party. Poll after poll shows that the majority of policies that people in the United States support are actually really progressive, more progressive than even some that the Democratic Party is proposing right now. They want medicare for all, they want debt free college, they want regulations on Wall Street, they don’t want tax cuts for the wealthy. They want a life that is better for themselves and for everyone around them. Those are progressive policies.

So if Steve Bannon wants to step in and push the Republican Party to the right, which I strongly encourage him to do, it’s going to kill the Republican Party. And at this point, that’s what we need. The Republican Party has outlived its usefulness in the United States. They have not come up with a new policy proposal since the 1980s when they invented the idea of trickle down economics, even though it’s been an abject failure. And the guy who created it said that in theory, it works, but in practice it is impossible for it to actually work. So they know it doesn’t work, and that it can’t work, and that there’s no way it ever would work, but that really was their last idea.

So if Bannon wants to take this Republican Party and push it further to the right, by all means go ahead because all you’re doing is speeding up the death of this party that has been dying since the 1980s, and I don’t think there’s too many people in this country that are really going to miss it when we finally put it six feet under the ground.