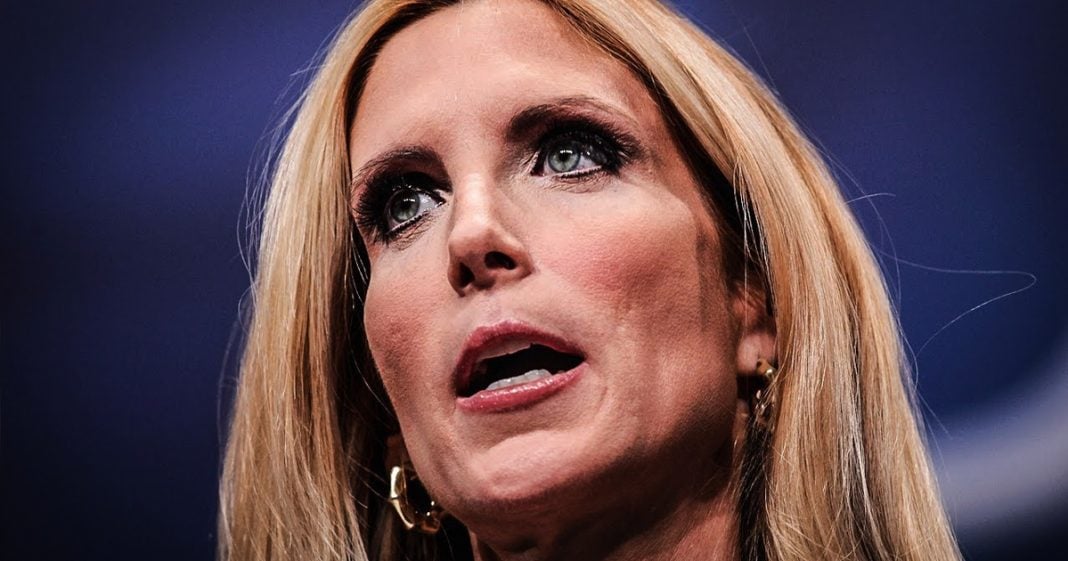 It wouldn’t be a natural disaster if there weren’t members of the Republican Party waiting to blame the entire thing on gay people, and that’s exactly what’s starting to happen with Hurricanes Harvey and Irma. Right wing pundit Ann Coulter jumped into the fray, claiming that the storm being God’s wrath for homosexuality was more plausible than the storm being caused by climate change, and right wing evangelicals are right on board with her. Ring of Fire’s Farron Cousins explains how people like this are destroying progress in America.

As the United States still deals with the devastation that came from Hurricane Harvey and Hurricane Irma, and the wildfires out there in the west, it’s important to understand that it’s really not a natural disaster in the United States until you have the right wing coming out and blaming it on gay people. That is exactly what has happened in the wake of Hurricanes Harvey and Irma.

Right-wing evangelicals immediately jumped on Hurricane Harvey, where they said … This is minister Kevin Swanson, who said that Houston had sinned by having a very, very aggressively pro-homosexual mayor. Here’s the exact quote. “Jesus sends the message home. Unless Americans repent, unless Houston repents, unless New Orleans repents,” because they’ve got to throw in Katrina, “they will all likewise perish.” According to this guy, Kevin Swanson, a right-wing evangelical, it’s because of gay people, because politicians might be nice to gay people, that they have the audacity to treat them as equal to other human beings, God says, “You know what? I’m going to send a storm your way to prove you wrong.”

Ann Coulter, the right-wing pundit slash author, decided to jump in the fray as well. She said, “I don’t think that God sent a hurricane because the mayor supports gay people, but I do think that’s more plausible than believing in climate change.” Ann Coulter got her little dig in there, saying, “I don’t actually believe it, but I do believe it, and of course climate change is a hoax.” Every available piece of scientific evidence right now talks about the fact that climate change is what made these hurricanes so strong, what made the damage so catastrophic.

These idiots on the right, and that is exactly what they are, think that it’s because of gay people. If God hates a certain group of people, pretty sure it’s not going to be the gays. It’s probably going to be the people that showed up in Charlottesville and killed someone out of hate. It’s probably going to be the politicians who pass legislation to benefit the people who already have enough and takes everything away from the people who are struggling to get by and don’t have enough food to feed their families, or have Republicans not actually read the Bible? Because literally every policy these idiots have goes against what is in the teaching of the New Testament. Everything could not be further apart, and yet they have the audacity to say that God created these hurricanes because He’s mad at gay people and the people who treat gay people like people.

This is why we can’t make progress here in the United States, folks. It’s because of people like Ann Coulter. It’s because of the religious right, because of their backwards, illogical, and completely fabricated religious views that should have no bearing on United States politics whatsoever, and yet they do somehow. We need to act on climate change. We need to start treating other human beings like people. Those shouldn’t be political sides of an argument.

That should be basic common sense. It is pretty much everywhere else in the industrialized world, but here in the United States, we find a way to politicize everything, including how we treat fellow human beings and what to do about the fact that our constant emissions, that our reliance on fossil fuels is literally starting to kill people in this country because we refuse, as a party, as the Republican Party, to accept the link between global emissions and catastrophic climate change. They are holding us back, and until those people either shut up or go away or retire, we will never be able to make the progress that we need as a country on so many issues, because they’re always going to be there to hold us back.