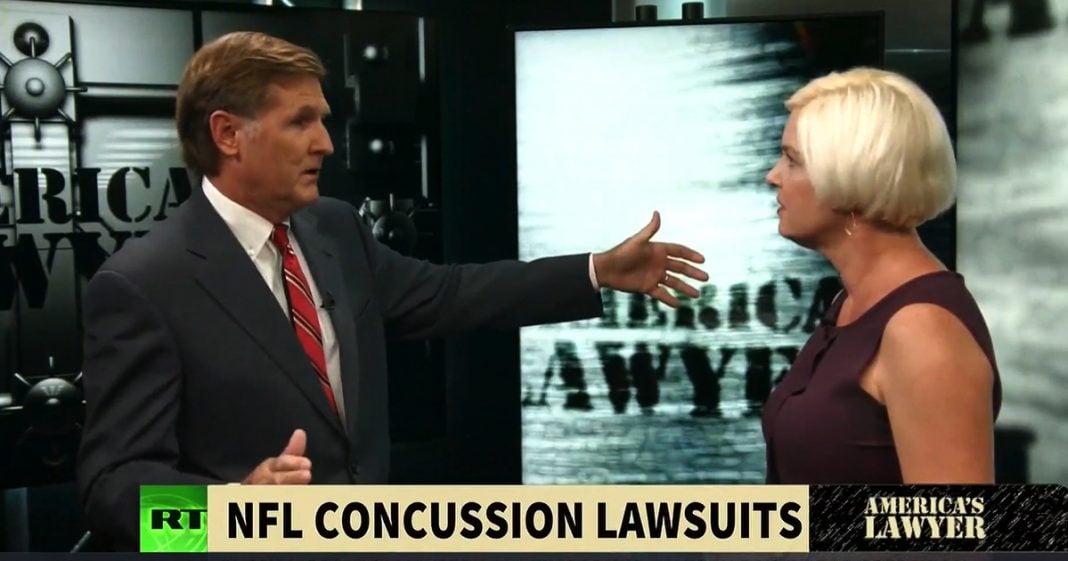 Via America’s Lawyer: Mike Papantonio is joined by Mollye Barrows, Legal Journalist for The Trial Lawyer Magazine, to talk about the NFL’s ongoing woes over their concussions scandal.

Mike Papantonio: The NFL is reaching a settlement with six insurance companies that have sued them over expenses that came from a $1 billion concussion settlement. The court cases for the NFL related to the scandal around concussions are far from over as dozens of insurers are still pursuing legal action against the Football League. Joining me now to talk about this is Mollye Barrows, legal journalist for “The Trial Lawyer Magazine.” Mollye, let’s talk about the truth here. Who are the real beneficiaries of this settlement? What’s it for?

Mollye Barrows: Well, so far, if the players are the beneficiaries it remains to be seen. The trust is somehow buried in amongst all these documents with the settlement. The real issue is that thousands of players sued the NFL for basically what they say, covering up evidence related to the dangers between concussions and degenerative brain disease. Playing professional football and the problems that it causes with your brain. They sued, the NFL settled for $1 billion. Then the insurance companies come along.

They sue the NFL as well, saying, ‘No, we want you to pay for us. We agree with these players. What did you know? When did you know it? We don’t want to pay this money. You need to pay it to us. Why are we having to pay your bills when you could have come clean?’ Then the NFL settles with them. The real loser in this is the truth. Who knows, really, what’s going on?

Mike Papantonio: But it’s the cover up. In other words, the insurance industry even concluded that, ‘Hey, we saw these documents. You covered up a lot of stuff.’ The reason that’s so important is because the NFL doesn’t want this material out there.

Mollye Barrows: Got it.

Mike Papantonio: This is like the tobacco case. They fought desperately to try to keep these documents hidden because they understood how bad they were. They were honestly right- They were criminal. There were so many of the documents that were criminal conduct. Here you’ve got the NFL all of a sudden, they’re caving in and they’re saying, ‘Oh, insurance companies, you may be right. Can we just keep this quiet?’ Isn’t that what’s developed here?

Mollye Barrows: That’s exactly what’s going on. You’re talking about a multi-billion-dollar business with the NFL. Heck, the $1 billion settlement to the players alone, the former players, is enough that they could make in a Monday night football game. Not exactly, but close. The issues with this and others have said, ‘The truth is still out there. Let’s figure out what it is.’

Mike Papantonio: Well, you had Florio. Mike Florio said this about the NFL when he was interviewed about it. He said, “The last thing the league wants is for media fans and potentially meddling politicians to see memos, see documents and transcripts, demonstrating the lengths to which the league went to fend off a potential existential threat from 2009 when the league had no choice but to deal with the problem.” That’s saying exactly what I just said, isn’t it?

Mike Papantonio: They’re so terrified by the truth here, aren’t they?

Mollye Barrows: In the past decade, a lot of this new evidence has been coming to light. In 2009, there was a Congressional hearing where the NFL was basically asked, ‘What did you know and when did you know it? Are you doing enough to look into the connection between concussions and degenerative player disease?’ You had so many players, Junior Seau and others, that were coming forward and saying there were all these issues. But essentially, the NFL, it took that Congressional hearing for them to say, ‘Okay, we’re gonna take another look. There are issues with concussions. We’re gonna re-‘

-play if they’ve had a concussion, and then that’s when you started to see these lawsuits tumble. As long as they keep settling before they go to trial, these details aren’t gonna be made public during disclosure.

Mike Papantonio: Right, but they could have done this decades ago.

Mike Papantonio: They could have saved a lot of lives and a lot of misery and suffering.