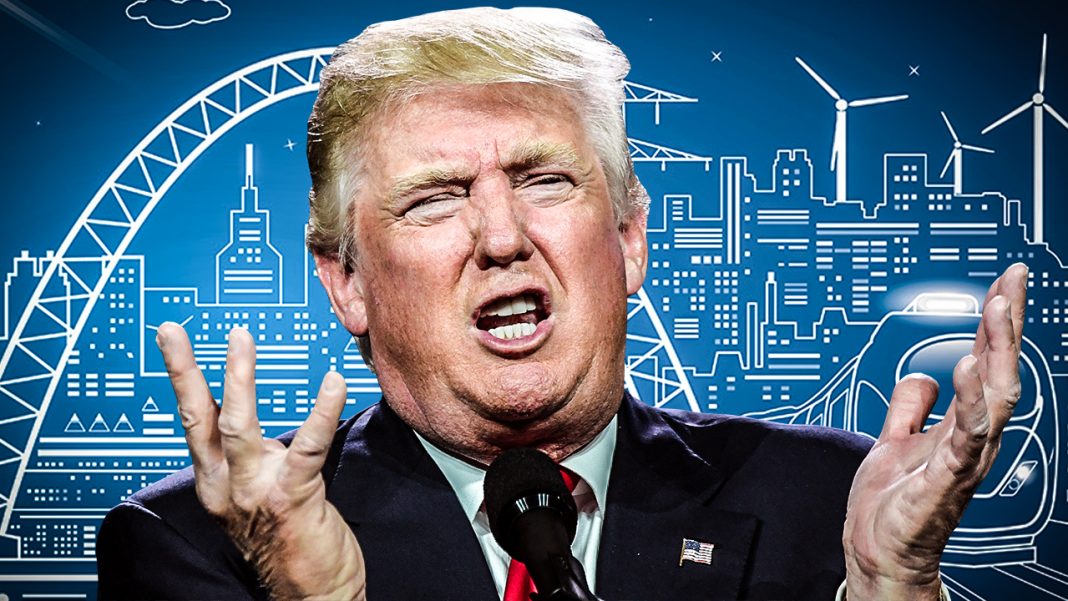 Donald Trump made infrastructure a key component of his presidential campaign. But now that he’s won the highest office in the land, he hasn’t done anything on infrastructure. The $1 trillion plan that he’s been working on is just another giveaway to big corporations because he just wants to privatize our infrastructure and let corporations charge us for it. Ring of Fire’s Farron Cousins explains why this plan will be a complete disaster.

One of the more, I guess, ambitious things that Donald Trump talked about relentlessly on the campaign trail was the need to invest in American infrastructure. Now, this was one of those talking points that he would throw out there that actually did get some liberals and some independents saying, “You know what? That’s actually a really good idea.” Because it is a really good idea. But like most things, a lot of us didn’t believe him for one second when he was actually going to do this. After all, the infrastructure has been crumbling since George W. Bush took office. He did nothing, Obama did very little if anything at all, so why should we expect anything different from Donald Trump?

Well, apparently, Donald Trump does have a close to one trillion dollar infrastructure plan that he actually wants to put in action. The unfortunate part of it is that it’s going to make things so much worse here in the United States. Because Donald Trump’s plan is not necessarily to spend on trillion dollars, sending construction workers out there to fix our roads, and bridges, and buildings. It’s a one trillion dollar plan that basically involves selling off a lot of our public infrastructure over to private corporations who can then repair it and then charge us for using the things that we’ve been using our entire lives completely for free. The things we paid for with our tax dollars.

That is Donald Trump’s infrastructure plan. He wants to privatize the whole damn thing, sell it to corporations, and then let them charge us for using it. Again, we’ve paid for it. That’s where our taxes go. Those are our roads and our bridges. We’ve been paying money for years to the government to fix them, not to sell them off to corporations. This was actually what Mike Pence did as governor of Indiana. They had a huge infrastructure problem, but rather than investing state money or asking the federal government to come in, he decided to sell it off. One of the biggest things, I believe, was interstate 69 running through Indiana.

He sold it off. And the company that bought it, that took it over, did a horrible job rebuilding it. And of course, people were then charged to use it. Imagine having to go to work every single day using roads that you usually do, and then suddenly you realize you’ve got to stop for a toll. And then a couple feet further, there’s another stole because there was another intersection and more people got on it. That’s what we’re looking at here. Privatization here in the United States has never worked. When the federal government tries to privatize something or use a private company, these government contracts to come in and do something instead, it hasn’t worked out.

It hasn’t worked out since the Civil War. That’s why we have key Qui tam laws in the United States because military … The US government, excuse me, has been getting ripped off by contractors since at least the Civil War. It’s a system that never ends. Any time a corporation sees that they can get their hands on a lucrative government contract worth billions of dollars, they’re going to jump at that opportunity, provide the bare minimum in services, and pocket all of the rest of it.

And that is what Donald Trump wants to do with our infrastructure, an infrastructure that is becoming dangerously inadequate, inept, and decrepit. It needs to be fixed. It doesn’t need to be privatized. Unfortunately, the only thing Republicans in this country know how to do is to sell their problems to somebody else and let those other people make a killing off of it. And then the Republican doesn’t have to worry about it anymore.