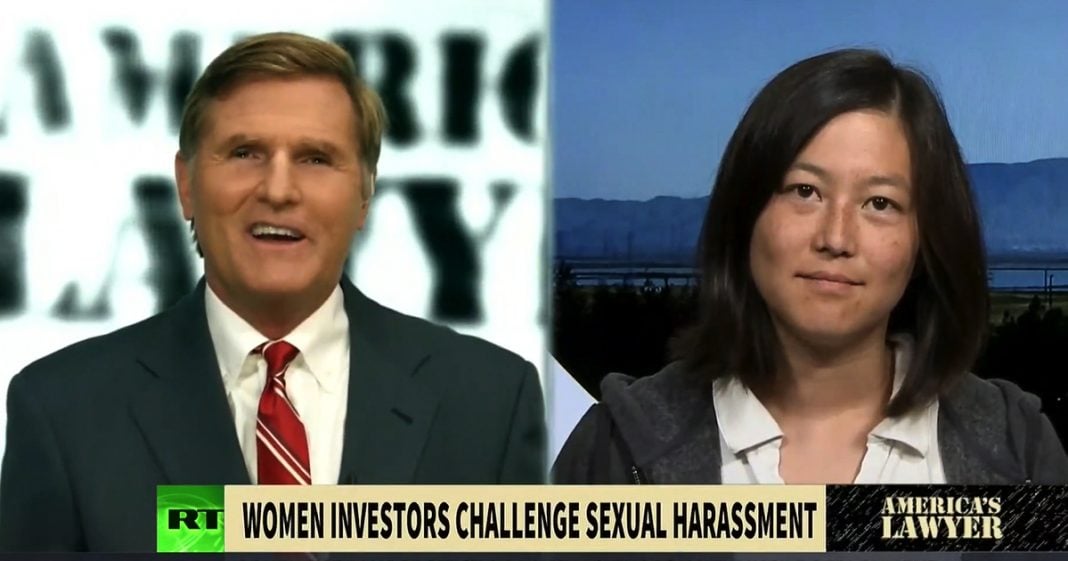 Via America’s Lawyer: Mike Papantonio talks with Elizabeth Yin, Former 500 Startups Investor, about how sexual harassment in Silicon Valley is being challenged by women themselves.

Mike Papantonio: Silicon Valley, the heart of the tech venture capitalist scene, was shaken to its core with more than a dozen women coming out, accusing male investors of sexually harassing them. The allegations go from one woman receiving unwanted suggestive text messages late in the night, another being pushed to a corner for a kiss, and one being invited to a hotel room. The women were seeking funding, pure and simple. They were seeking funding from the investors, hoping to launch their own tech businesses, and as a result two top venture capitalist investors had to resign.

Joining me now to talk about this is Elizabeth Yin, a successful entrepreneur herself and a former partner at 500 Startups. The most recent developments with this case in Silicon Valley is the announcement by a California State Senator who plans to introduce a bill SB224. Can you talk about that, Miss Yin? What’s your take on SB224?`

Elizabeth Yin: Sure. Admittedly, I have not read this bill. I don’t know the details. I think, just in general, on one hand I do applaud that people are taking this issue very seriously and are looking to find ways to stop bad behavior between investors and entrepreneurs. But on the other hand, I think legislation in itself is going to be very tricky to actually change this behavior. I mean I think, at the heart of it, when all of this happens, often late at night after parties, I don’t think any investor is thinking, ‘Oh gosh, what are the legal consequences of my actions?’ Already, I believe, it’s illegal to sexually assault someone.

Mike Papantonio: Well, it is. If you’re thinking about it, here you are. You’re an entrepreneur. You’re saying, ‘I have a great business here. You can invest in this business. You’re going to do well by the business.’ But the first thing that comes to their mind is how do they sexually harass you. This isn’t new, is it? This is something that apparently is part of the program and has been part of the program in the Silicon Valley for quite a while. Did I get that right, or what’s your take on it?

Elizabeth Yin: That’s right, yeah. This is not new behavior. You know, I think there are a few nuances here. I think, one, this isn’t happening in pitch meetings. I think interactions between investors and founders happen over a period of time. Nobody is getting sexually assaulted in a conference room, but people go to parties together and this is where a lot of investors have crossed the line thinking that it’s appropriate, when actually it’s not because there is this professional context, and there is this asymmetry of power and that’s really the key thing here.

That’s why I feel like legislation is tough, because very often when these things happen, and this is not excusing the bad behavior, investors are not thinking logically necessarily about, ‘Oh gosh, could I go to jail for this,’ or whatnot. I think, actually, what needs to happen is a way to call out the bad behavior so that investors are afraid of just even being reminded of this asymmetry of power and seeing consequences from their own peers.

Mike Papantonio: What about this? You’ve got somebody who comes forward with a great business idea, and the industry says, ‘Well, you know,’ somebody in the industry makes a determination, ‘Well, it’s more important for me to sexually harass or sexually abuse this potential business entity,’ of the people coming forward of that entity, ‘It’s more important for me to do that than look at this long-term and end up losing money.’ I mean, you lose business opportunities when you adapt to this reptilian mind that the idea of sex is more important than the idea of long-term profits for the company that you’re supposed to be investing with.

Doesn’t the system take care of itself once it’s exposed? Like we talked about here, two of these folks lost their job and probably affected their future somewhat in that business. Don’t you just have to call them out, make a big issue out of it and humiliate them that way?

Elizabeth Yin: Yes, absolutely. That’s what I think needs to happen. That’s sort of a nuance between legislation and having investor peers call out this bad behavior. I mean, the reason we’re starting to see things change is that people got caught and their stories went to the media. I think that actually is what puts everybody on a grounded playing field, and is like, ‘Okay, it’s not okay to do this, and there are consequences in the public eye.’ I think that is what needs to happen more. I actually think that a good strategy might-

Elizabeth Yin: Yes, it does, and I think that needs to happen more because we are just scratching the surface on this.

Mike Papantonio: I-Ling Lee is an investor who says the amount of women who make up the percentage of partners at venture capitalist firms is 5%. That seems a little low. She mentions doubling that to 10%, that would even seem low to me. Why do you think it’s so low in the first place, and how could we help double those numbers going forward?

Elizabeth Yin: Those numbers are quite low, and I think it really stems from a couple of things. I think one, traditionally, in order to get into venture capital you needed to have a certain type of background. In many cases, it was not only going to certain schools, ivy league schools or whatnot, but it also meant that you needed a particular type of experience. Maybe you came from consulting. Maybe you came from a successful startup exit. But in any of those paths, actually traditionally, all of those fields, in technology, in startups, and even consulting, have been dominated by men. So, if that’s where you’re pulling from then those number are going to be low.

Mike Papantonio: Yeah, I’d like to say we don’t see it in the practice of law but we do. It’s actually deplorable. The glass ceiling that exists for female trial lawyers in the practice of law is exactly the challenge that you sound like you face. What were your personal challenges? We’ve got about 30 seconds. What were the personal challenges that you’ve been confronted with that you would want to talk about, and give us an idea of what you’re going to do about it. Got about 30 seconds.

Elizabeth Yin: When I was raising money for my own startup, I had an investor tell me, ‘I don’t want to say the wrong thing and call you a meek Asian woman, but I question how you’ll lead a team of a hundred people.’ This type of attitude is prevalent, but I think you just have to kind of push through and find your supporters.

Mike Papantonio: Well, I think it all begins with somebody like you who’s willing to talk about it, willing to humiliate the other side. I hate to say it but you know what? I deal with corporations toe-to-toe every single day, and the only thing they understand are two things. Take their money away from them and humiliate them in the process. Hopefully, that’s what you’ll do going forward. Thanks for joining me.