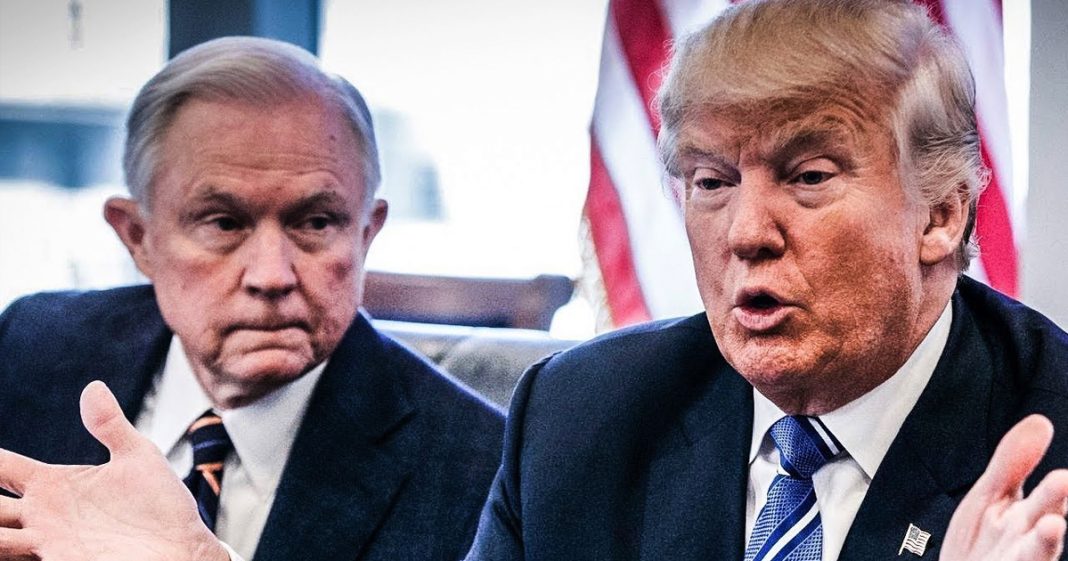 The White House has filed an amicus brief with the U.S. Supreme Court in the case of the baker who refused to make a cake for gay couples. The brief argues that the business owner has every right to discriminate against anyone. Donald Trump and Attorney General Jeff Sessions believe that bigotry is ok, and that we have a right as Americans to discriminate against people. Ring of Fire’s Farron Cousins discusses this.

This week, President Donald Trump and Attorney General proved just how bigoted they are. They have filed an amicus brief with the US Supreme Court in the case of the baker who did not want to bake a cake for a gay couple. The baker argues that I am allowed to discriminate against anyone I want to discriminate against because that’s American capitalism and American democracy.

The Trump administration filed a brief agreeing with that baker saying, “Yes, if you own a business, you can discriminate against anyone if you don’t believe in their particular lifestyle, what they look like, what they do for a living. Have at it. You own that business. Go ahead and treat people like they’re animals because you own a business.”

I am absolutely sick and tired of all of the stupid little Republican lies saying that small business owners are somehow gods walking among us. They are not entitled to discriminate against anyone in this country. I don’t care if you own that business or if you’ve sacrificed everything to build up this business. Good for you. You still have to treat human beings like they’re human beings regardless of their sexual preference or religion or ethnicity or anything else. That’s our job as human beings, because that’s what we are first, human beings. It doesn’t matter if you own a business or if you’re a factory worker or a billionaire. First and foremost, we’re humans, and we should treat everyone with respect, the resect that we demand they serve to us.

But that’s not what the Trump Administration thinks. That’s not what Donald Trump thinks. That’s not what Jeff Sessions thinks. They think that if you’re gay, you better pick and choose what stores you want to go to and hope that they will serve you, because we don’t think they should have to. We think that anyone who owns a business is better than you, and they know better, and they can do better. That’s why they can discriminate against you. We don’t care about the LGBTQ community. We don’t care about other ethnicities or other religions. As long as you’re a white business owner, the world is your oyster, a white, straight, business owner. I guess I should clarify, because we have to start throwing that in now, too.

The bottom line is this. Donald Trump had promised us during the campaign he was going to be so good, so good for the gay community. But as it turns out, he is just as bigoted, if not even more so than George Wu. Bush was, and those were some bad times.

We’re going backwards as a country when we start allowing companies, businesses, whatever, to start discriminating against people just based on who they are. We’re literally going back to the s’s and s’s. Pretty soon we’re going to have to have separate bathrooms for them. Oh, wait, we’re already having that argument, too.

I hope everybody in this country understands how far back in time we are going here. If we continue to go back any further, we’re going to be right back to the point where in some states it was perfectly legal for one human being to own another one. That is where Donald Trump is taking this country, and Attorney General Jeff Sessions is right along for the ride.