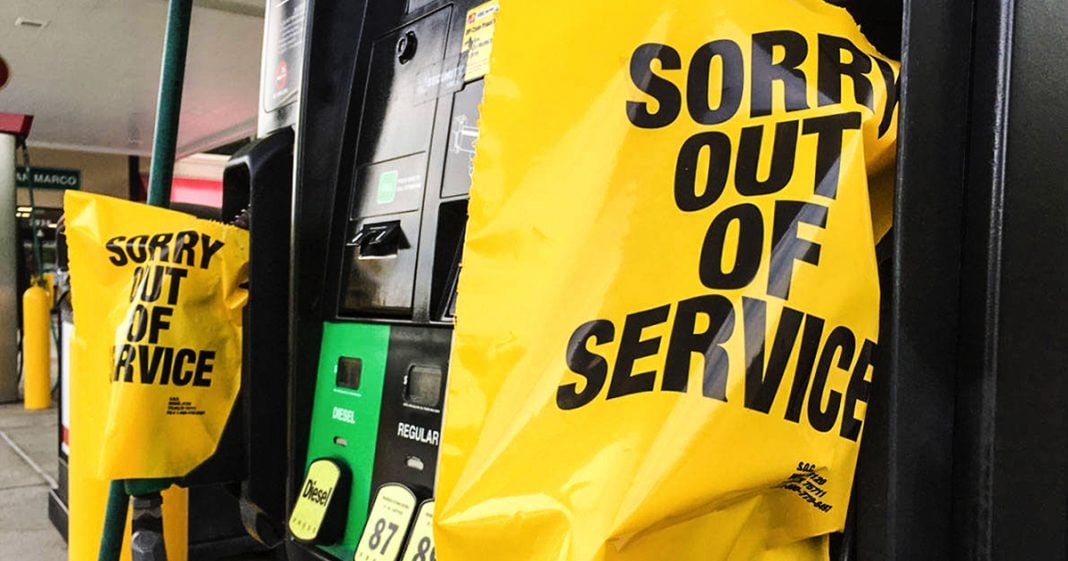 Ed Schultz: All right. Now, there’s going to be relief. The Senate has voted for $15.25 billion. The vote was 80 to 17 that they’re going to extend the debt limit. They’re going to get hurricane aid to the folks down in Texas and, of course, they’re set to do something for the folks in Florida.

I don’t mean to be critical here in the 11th hour before this storm, but why doesn’t the Federal government do something about the gas supply? Why should there be any shortage of any fuel if they’ve known for days that this was going to be the mother load of a storm and have FEMA just purchase a bunch of gas and sell it back to consumers so at least the gas stations are going to be full? I just don’t understand that. The evacuation on I-95 in Florida is bumper to bumper. It’s amazing that there haven’t been really any social unrest through all of this. But this is going to be a bad one. There’s no doubt about it. So, we’re going to have coverage from Marina Portnaya tonight, who is brave enough to stay in Miami and cover this storm that’s coming up.

Is this bipartisan agreement real? I want to go to Mike Papantonio, Ring of Fire radio host and host of America’s Lawyer on RT America. Mike, good to have you with us.

Mike Papantonio: Ed, how are you?

Ed Schultz: I’m doing good. I want your take on is this a bipartisan effort or is this something that Trump had to do because it was a hurricane? For instance, Paul Ryan, speaker of the house, he was slamming it yesterday morning. Today he’s praising the fact that the President has done this and hurricanes, of course, don’t discriminate against Republicans or Democrats. How do you think this plays out?

Mike Papantonio: Well, I think it plays out well for Trump. The money that they’ve set aside for this, if that’s your point, it’s not even close. When Florida gets hit with this hurricane, I don’t think it’s going to be quite the caliber of what we’re seeing with Harvey in Texas, but you’re talking about mass destruction on some of the heaviest residential areas along that east coast of Florida. The last time I was in Miami, you can’t even see the water, there’s so many skyscrapers and condos. The impact of this is phenomenal.

Your point, though, about the fuel, that has been asked down here. You understand… The US government’s got to … They’ve got a reserve for these very types of things. Well, I mean, what you use the reserve for. This is a national emergency. There should be no question about the fuel. You’ve got people running out of fuel along 95. They’re having to pull off the road and find out how they’re going to go any further. It’s been orderly, but it hasn’t hit yet. And when it gets closer, I’m not so sure we’re going to see the same thing.

Ed Schultz: I thought they shut down oil production and gas production or limited it in North Dakota because there’s such an unbelievable glut on the market in the world. What the hell’s going on?

Mike Papantonio: Well, first of all, understand this. I’m a little cynical because I’ve seen this so many times. I’ve lived in Florida all my life. I’ve been through some of the worst hurricanes that have ever hit the country. I see this happen and I want to say you’ve got people who are not above gaming the system.

Now, the argument that we’re hearing now is, gee, the refineries all along the Texas coast are the ones that were hit, they’re not usable anymore, therefore, that’s part of the problem. Every time we drill down, every time we take a look at this story, it always comes down to somebody saying this is an incredible opportunity. You have two of the biggest states in the union that are going to-

Ed Schultz: Since when do you believe the oil companies? I thought they had all these tankers that were parked offshore because they couldn’t even … They didn’t have enough refining capability.

Mike Papantonio: Yes. Well, I got to tell you, the oil story that’s going to come out … This is going to be interesting. There’s going to be a lot of destruction story coming out, but we’re going to get a real first hand look at how this industry operates. And we do that every storm. I can’t think back on any major hurricane where this discussion has not come up. Gee, they’re gaming the system again. I would tell you, especially in Florida, understand there’s clear access to the roads in Florida, especially coming in. If they really-

Mike Papantonio: If they really want to get oil in, they want to get gas and fuel down here, they could do it. But the real problem is, you understand, the US government has this bounty. I mean, there’s a huge amount of reserve and that’s what it’s used for in situations like this, especially when you have oil companies that are gaming the system, which is actually happening.

Ed Schultz: I’m surprised that Governor Scott hasn’t asked the Federal government to get fuel down there.

Mike Papantonio: Well, that’s really no surprise to me. You know, look. I got to tell you something. This story, if you go back and look at the last I’d say two major hurricanes and you do some research on them, this fuel story comes up every single time. There’s always a crisis. And it’s not just storms. It can be virtually any kind of … It could be too cold. Well, there’s a fuel story. It can be some type of event that takes place where you’ve got some cat in a three piece suit, sitting in a Wall Street skyscraper that says, ‘Gee, you know, we don’t have to really game it that much and we’re going to make billions.’ And that’s what happens-

Mike Papantonio: … all the time, especially down here in Florida.