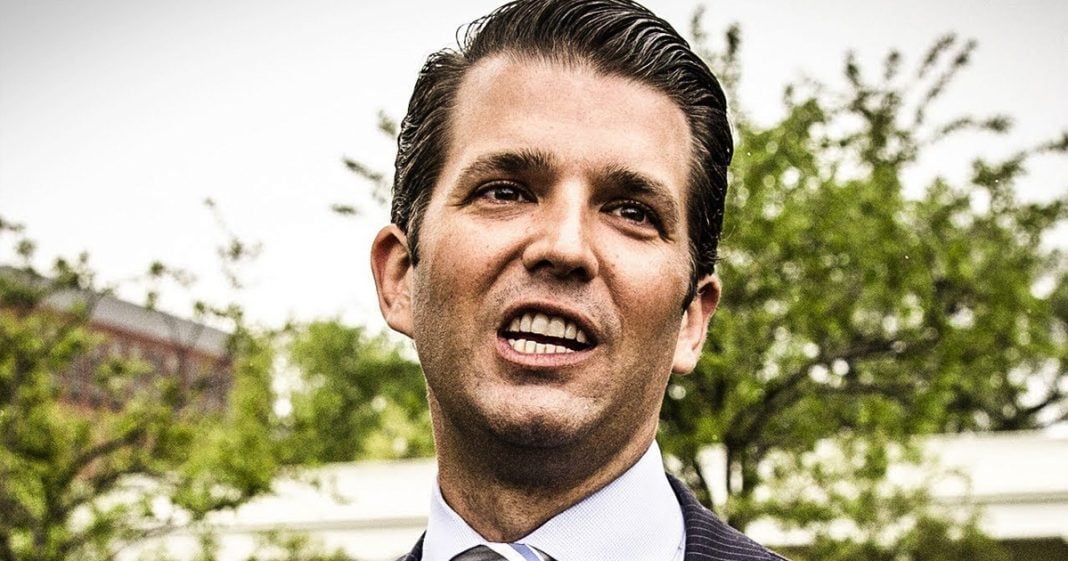 Donald Trump Jr. was forced to give testimony this week behind closed doors to a Senate Committee about his meeting with Russians in the early Summer of 2016. While we don’t know exactly what he said during the meeting, Democratic Senator Chris Coons has suggested that Jr. was less than honest about the purpose of the meeting. Ring of Fire’s Farron Cousins discusses this.

On Thursday, Donald Trump Jr. testified for five hours in front of a senate committee behind closed doors, where the public was not able to see what questions he was asked or what answers he gave. However, we still have pretty good evidence that Donald Trump Jr. did nothing but lie his butt off in front of that senate committee. This evidence comes from democratic Senators Chris Coons and Richard Blumenthal. Both men had said that after the testimony, first of all, it was clear he was not being completely honest with his answers, and further more, he left a lot of questions unanswered.

So senators left that meeting, that testimony, that hearing, with more questions for Donald Trump Jr. than he actually provided answers for. He opened a lot of holes, according to Richard Blumenthal, and there’s a lot of just spots within his testimony that don’t quite add up. Here’s what we’re looking at right now with this entire investigation going on into the Trump Administration, obviously due to the fact that he had to testify and he met with the Russians, Donald Trump Jr. is currently front and center in this entire investigation. What special prosecutor Bob Muller is also looking at right now, is Donald Trump’s decision to dictate Trump Jr.’s response to The New York Times about his meeting with the Russians.

And that’s where we got the whole, “Oh, it was only about adoption thing.” Turns out, that was completely false, we know that now, and we know that Donald Trump, according to sources, is the one who dictated that specific response, which could, in a way, be construed as obstruction. And that is exactly what Bob Muller is looking at right now. He has decided he’s going to interview members of the White House staff to find out exactly how involved daddy Trump was with Trump Jr.’s response about Russian adoptions. This is looking really bad for the entire Trump family at this point, and even if we don’t have any kind of obstruction on behalf of trump with regards to Trump Jr.’s response, and the whole Russian adoption thing, we still know that the Russian adoption talking point that Trump Jr. Initially gave is completely false.

Trump Jr. admitted in a statement on Thursday that this meeting, he wanted to get information on Hillary Clinton because he wanted to see how fit she was to hold office. And if it happened to be a foreign power that had that information to give him, he was still gonna hear him out, and then, according to him, meet with his council to decide if it was something they wanted to go forward with and release publicly, and bla, bla, bla. Democratic Senator Richard Blumenthal again said, “We have no reason to believe that when Trump Jr. went into that meeting and spoke with those Russians, that those Russians weren’t ready and open for business, hoping to help Donald Trump get elected.”

That’s the overall takeaway from Donald Trump Jr.’s testimony on Thursday. He didn’t do his family any favors, he didn’t do himself any favors, and all he’s done is open up an entirely new can of worms that hopefully Bob Muller’s gonna use to continue this expedition to finally bring down the Trump Administration.