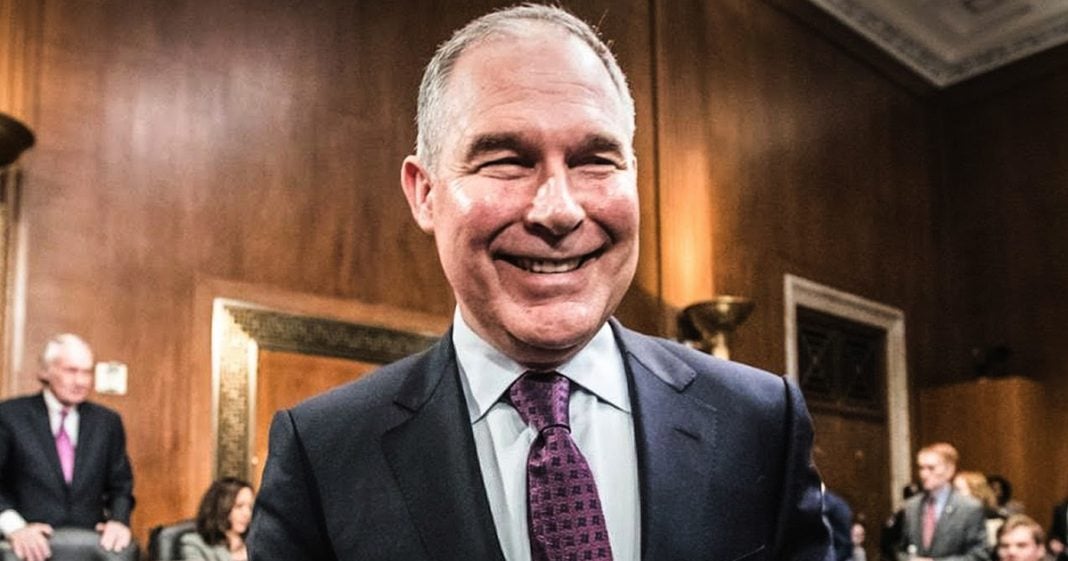 Scott Pruitt, the fossil fuel-connected head of the Environmental Protection Agency, told CNN this week that as Hurricane Irma approaches the U.S. mainland, it wasn’t the right time to talk about climate change. After Hurricanes Harvey, Irma, Jose, and now Katia in the span of 2 weeks – and all of the available evidence pointing towards climate change making these storms stronger than ever – I’d say it is the perfect time to talk about climate change. Ring of Fire’s Farron Cousins lets loose on the corporate sycophant running the EPA.

In case you haven’t been paying attention, there are currently three very large hurricanes in the Atlantic basin. Irma, Jose, and Katia down in the bottom left hand corner of the Gulf of Mexico. Each one of these storms is intensifying rapidly. Hurricane Irma, not that it has gone over some land has decreased slightly, still a category five, still catastrophic damage. And in spite of all of this going on, and in spite of the fact that two weeks ago we had Hurricane Harvey absolutely devastate Galveston, Houston and several other cities in Texas, and in spite of the fact that earlier this week a part of the mid-west, excuse me, the western part of the United States was on fire. Scott Pruitt, the head of the Environmental Protection Agency went on CNN this week to say, “Look, now’s not the time to talk about climate change.” We gotta focus on these disasters, we can’t be having climate change arguments.

If that particular line of thinking sounds familiar, it’s because that’s the exact same line that Republicans use after a mass shooting, and we say can we talk about gun control now? Can we talk about curtailing it a little bit? Now’s not the time to talk about it. That is the standard Republican line we get every time they’ve ignored an issue for so long that it creates a massive problem. The massive problem pops up and then they tell us, now’s not the time. We can’t do it now. We don’t want to talk about climate change, we just need to deal with what’s happening. We’ll talk about climate change at a later date. Hopefully, never. Because that’s what Scott Pruitt and the Trump administration and pretty much the majority of Republicans in Washington, DC want. The majority of Americans right now are represented by a climate change denier in the House of Representatives. That is a disgusting fact and that is something that is unfortunately uniquely American.

We are the only industrialized country in the world that has a national party whose platform includes either the outright denial or complete inaction on the issue of climate change. That is what we’re dealing with. This isn’t a global phenomenon. It’s American. It’s Republican American. They’re the ones who collectively do not want any action on climate change. Who continue to bury their heads in the sand on the issue of climate change because they don’t even want to hear about it. Most of them don’t even believe that it’s real. Well, I gotta tell you, these three storms churning up the Gulf of Mexico and the Atlantic Ocean and the Caribbean? Those are very, very real. Hurricane Harvey was very real. Those fires were very real, and that’s just what’s happened in the last two weeks, folks.

We’re not talking about things that have been accumulating for years. This is two weeks on. Climate scientists and other experts have agreed that the reason these four storms that we’ve seen in the last two weeks grew so intense so quickly is because of climate change. Because of the warming of the oceans, because of the air currents that are happening. That is climate change 100%. We’ve been being warned for at least a decade now that climate change wouldn’t necessarily increase the frequency of storms, but it was going to increase the intensity of storms. We’ve got four exhibits, again, from the last two weeks that prove that. It’s time for the Republican party in the United States to wake up and understand that ignoring this issue, saying now’s not the time to talk about it, isn’t gonna fix anything. All it’s gonna do is continue to make the problem worse. But it doesn’t matter to Republicans because they’re still gonna pocket all those fossil fuel donations and that is what is keeping them ignorant about the issue of climate change.