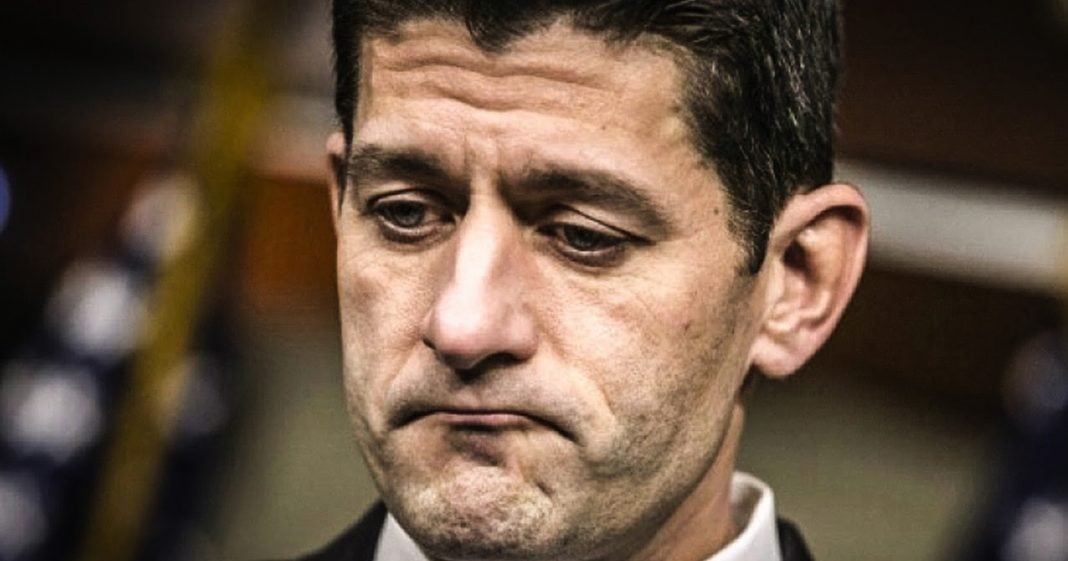 The House Freedom Caucus is not very happy with Paul Ryan’s complete lack of progress as Speaker of the House, and they are airing their grievances with him while also trying to find a suitable replacement. Is Paul Ryan’s short tenure as House Speaker already coming to a close, or has the Freedom Caucus lost their clout within the GOP? Ring of Fire’s Farron Cousins discusses this.

According to a new report in the Washington Post, the House Freedom Caucus, who you may remember as the people who helped unseat former house speaker, John Boehner, back in 2015, are now meeting with Paul Ryan and others to talk specifically about maybe removing Paul Ryan as Speaker of the House. On Wednesday of this week, Paul Ryan met with three members of the House Freedom Caucus, where they openly expressed their disdain for Ryan, explaining that he is an incompetent leader and he’s really accomplished nothing since taking over for John Boehner at the end of 2015. That’s only part of the story.

Now, Paul Ryan has been exceptionally ineffective since he took over for John Boehner and, yes, most of that is his own fault. While I’m happy that Paul Ryan has not been able to pass a single thing on his agenda to date, it is worth noting that he’s Speaker of the House with a majority of Republicans in the House. He’s got a majority of Republicans over there in the Senate to back him up if needed. He has a Republican in the White House. He has a Republican majority on the Supreme Court. Republican majorities in state governments. When you fail at that point, yeah, it’s your fault.

Paul Ryan was swept into the house speakership as a member of the Tea Party. At the time, and when he ran with Mitt Romney, which is why Mitt Romney chose him to begin with, he was a darling of the Tea Party. They loved him. They loved his hardcore libertarian stance on economics, his right wing compassionate conservatism, because he would go with whatever the religious right wanted to say. Now, Paul Ryan has found out, when you’re in a position of leadership, you can’t be that crazy. You can’t have these horrible libertarian economic ideas, and these horrible Republican social ideas, and attempt to work with people across the aisle who hate everything that you propose, because it goes against everything that’s good for the American public.

Paul Ryan has matured a bit in this role as Speaker of the House. He still believes all those horrible things, and he’s trying to get most of them passed into legislation, but he does understand that you’ve got to tame your stance on some of the issues, because you also have to work with those Democrats on the other side. They’re not going to go along with more corporate tax breaks, even though you keep pushing them. They’re not going to go along with you taking health insurance away from 22 million people in this country, even though you pushed it. That’s why Paul Ryan has been ineffective, so he’s trying to pull himself out a little bit. It’s not going to work, because to these Republican purists, these hard right Tea Partiers and the House Freedom Caucus, nothing is good enough unless you’re willing to take everything away from American citizens and give it all to corporations, because that is all they’re about.

Now, the Tea Party was formed as this little organization that said, “Taxed enough already.” They were under the impression that Obama was going to somehow raise taxes, even though he actually lowered them for that group. That’s where they came about. Stop misusing our tax dollars. Stop spending all this horrible money. But, the people who got elected under the Tea Party banner are actually just taking those tax dollars and giving them to corporations in the form of tax breaks and tax write-offs. They’ve done nothing to actually benefit those Tea Partiers that we saw out there in those rallies eight, nine, years ago. That’s how they came to office and that’s what they still claim to believe. That doesn’t work in American politics, and yet, somehow, they have enormous influence over what happens in the House of Representatives. That’s why Paul Ryan’s job today is on the line.

Again, there’s no sympathy here for Paul Ryan. When you have majorities everywhere and you’re still not able to get your own party in line to go along with your horrible policies, at the end of the day, the blame for that rests squarely on your shoulders.