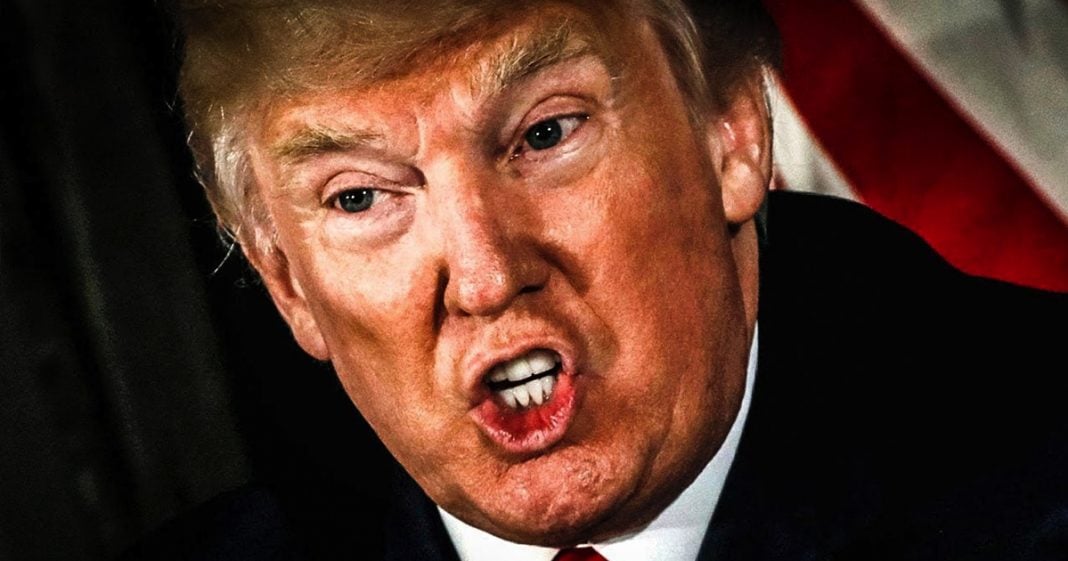 After Donald Trump made Jeff Sessions tell the country that they were rolling back DACA, White House Press Secretary Sarah Huckabee Sanders made an admission that Trump might be somehow using these immigrant children as bargaining chips to get the funding that he needs for his border wall. Ring of Fire’s Farron Cousins discusses this.

On Tuesday of this week, Donald Trump forced Jeff Sessions, the Attorney General of the United States, to come out and talk to the American public and let them know that they’re potentially going to end the DACA Program, the Dreamers Program, which would lead the deportation of more than 800,000 immigrant children that have been living in the United States since at least the year 2007. “They have six months,” is what a very giddy Jess Sessions explained to us at the podium on Tuesday, “They have six months and then we’re gonna revisit the program.”

But later on in the day, White House Press Secretary Sarah Huckabee Sanders came out and made things a little bit more clear for the American public because when she was pressed by CNN’s Jim Acosta about what that means, that six months, they’re gonna revisit it, Sarah Huckabee Sanders explained it this way. She said, “Look, there’s lots of big things we need to do with immigration, not just a tweak here or there but big reforms. Obviously, Donald Trump’s border wall is a big part of that and so the President is kinda hoping to use DACA to work with Republicans and Democrats who wanna save the program to get funding for his border wall.” So in a not-so-roundabout way, Sarah Huckabee Sanders admitted that Donald Trump is using these 800,000 immigrant children as bargaining chips against Republicans and Democrats in order to get funding he needs for his border wall.

Now, we understand that in American politics, things get dirty and there’s always this kind of quid pro quo, tit-for-that type thing. We’ve seen funding withheld from one project because one group wants to get funding for theirs and they won’t vote for it unless flops and whatever. This one’s a little different though because we’re talking about the immediate deportation of people here in the United States, people who came over with their parents, they had no choice in the matter. Now after living in the United States for at least 10 years, contributing, going to college, paying their taxes, joining the US Military, we’re gonna ship them back because Donald Trump is pissy about the funding for his border wall.

Maybe we won’t ship them all back at once, maybe we’ll ship over 10,000. Maybe he’ll do that to throw a little urgency into these border wall funding negotiations with Republicans and Democrats. Watch them get anxious as he just deports groups here and groups there to show that he’s not playing around. He is holding these children and these young adults hostage so that he can get the funding that he wants for that border wall, a wall which, again, won’t do a single thing to stop illegal immigration into the United States. I don’t know if Donald Trump realizes this, but we do have walls up over a lot of the border and it doesn’t even slow people down if they’re really determined to get into the United States. It just doesn’t.

Most of these people who are over here under the DACA, DACA, have not committed any crimes. They have not been implicated in any crimes. They’ve done nothing other than come over here with their parents, without a choice, and then contribute to US society, to our economy, to our taxes, to our schools. Donald Trump wants to send them away for no other reason than to pander to his alt-right base and get the funding that he wants for his border wall. The Democrats and Republicans, all of whom did not wanna see this program end, are now stuck between a rock and a hard place because we know the Republicans are gonna cower to Trump. They’re gonna give him the money that he wants if they can but the Democrats, they don’t wanna see these people deported but at the same time, they don’t wanna fund the border wall. So it puts them in a horrible position to have to negotiate with the President, who’s acting more like a terrorist at this point, because he wants that border wall so bad that he’s willing to destroy the lives of 800,000 people, who have been in this country for more than a decade, just to get his way.