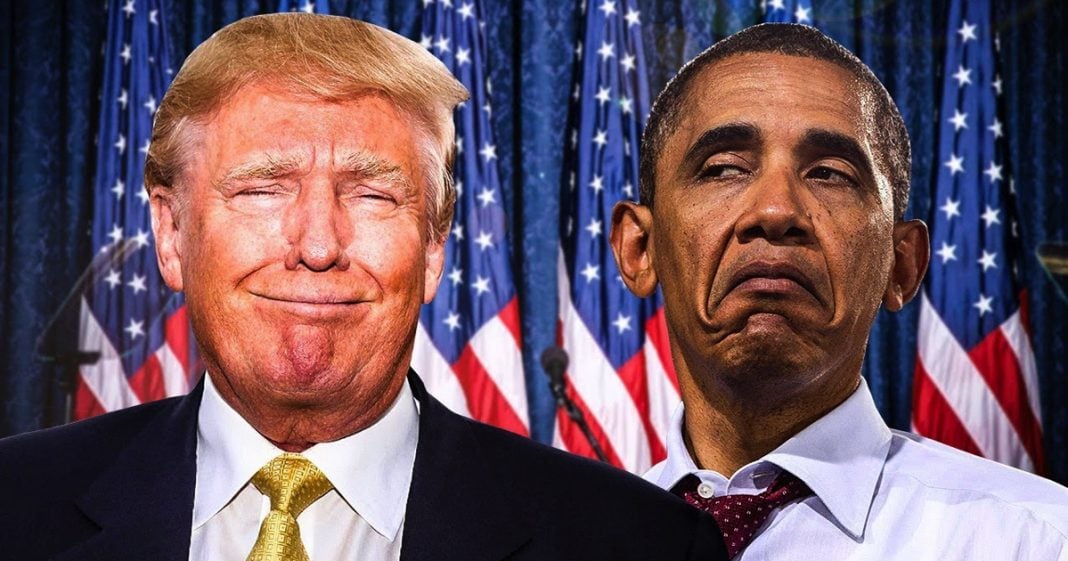 Nearly 6 months ago, Donald Trump made the outlandish accusation that Barack Obama had his “wires tapped” at Trump Tower in a tweet that sent the right wing into a frenzy. But after a lengthy investigation by the Department of Justice, they concluded that no such wiretap existed. What was Trump’s motive here, and what made him decide to make this claim in the first place? Ring of Fire’s Farron Cousins discusses this.

Back in March, Donald Trump tweeted out on a Saturday morning, “Just found out Obama had my wires tapped at Trump Tower just before the victory. Nothing found. This is McCarthyism.”

That was Donald Trump’s exact tweet from March. He accused President Obama of basically committing a felony by having Donald Trump wiretapped within Trump Tower in an effort to find who knows what. Now, immediately people began asking President Trump for some kind of evidence as to whether or not this wiretap existed.

But he never offered a single shred of evidence beyond his original statement and his repeated claims of this. So, the Department of Justice took it upon themselves to go ahead and investigate and find out exactly where Obama wiretapped and why he wiretapped and who authorized this wiretap.

But as it turns out, after nearly four, five months of investigation: there was no wiretap placed by the Obama administration into Trump Tower or on any phone line used by Donald Trump. Donald Trump flat out lied to the American public via Twitter that President Obama wiretapped him.

And apparently, we had to have a Department of Justice investigation to determine that Donald Trump lied. Not only is this a disgusting mis-use of tax dollars to go ahead and try to investigate another one of Donald Trump’s vanity projects, like we had to investigate whether or not pictures of his inaugural crowd were Photoshopped, but it shows just how far President Trump will go in order to smear President Obama.

Now, most of the lies that Donald Trump has told have either been related to some kind of policy or they’ve been lies of vanity, again, like the “my inaugural crowd was bigger than Obama’s,” “I’ve done more than other presidents have in this short amount of time,” and so on.

But they’ve been lies that served a specific purpose. This lie, saying that Obama wiretapped me, doesn’t necessarily serve a particular purpose. It doesn’t advance any policy, and it doesn’t make Donald Trump look better.

Now, maybe, maybe Trump thought that if I say this, people will have some sympathy for me, or they will think I’m important enough that Obama wanted to place a wiretap on me, but that’s a bit of a stretch. This lie served no purpose for Donald Trump, so the big question is, why tell it?

Why did he wake up one Saturday morning and decide to just tweet that out? What sparked it? What made him make this decision? Those are things that we the American public actually need to know, because it will give us a better glimpse into the very fragile, deteriorating brain of Donald Trump.

This is not normal behavior. Normal people don’t just make up these wild claims and tweet them out to the public, and we shouldn’t hold our president to a lower standard than that. We need to know why he told this lie, who inspired it, if anyone, and what we’re gonna do as a result of it.

We can’t continue to just let these things go. Yeah, we’ve got fact-checkers out there, but they’re not necessarily holding anybody accountable. It’s not like they can take this to the Senate or the House of Representatives and say, “Okay, you’re gonna have to impeach him, because he just told a lie here.”

That’s not how it works; technically, there’s nothing illegal about what Trump has done, as far as his lies. But we have to demand more. The public has to demand more and those idiots who still say they support Trump, they have to wake up and understand that this man is an absolute, pathological liar and he doesn’t give a damn about anyone, anyone but himself. And his constant non-stop lies to make himself look better, are proof of that.

But again, this particular lie doesn’t fit into that usual scheme and that’s why this one stands out so much. We need more answers on this and hopefully, somebody, maybe a psychiatrist, maybe at Mike Pence or John Kelly’s urging, Trump will go talk to a mental health professional and find out why he is incapable of telling the American public the truth.