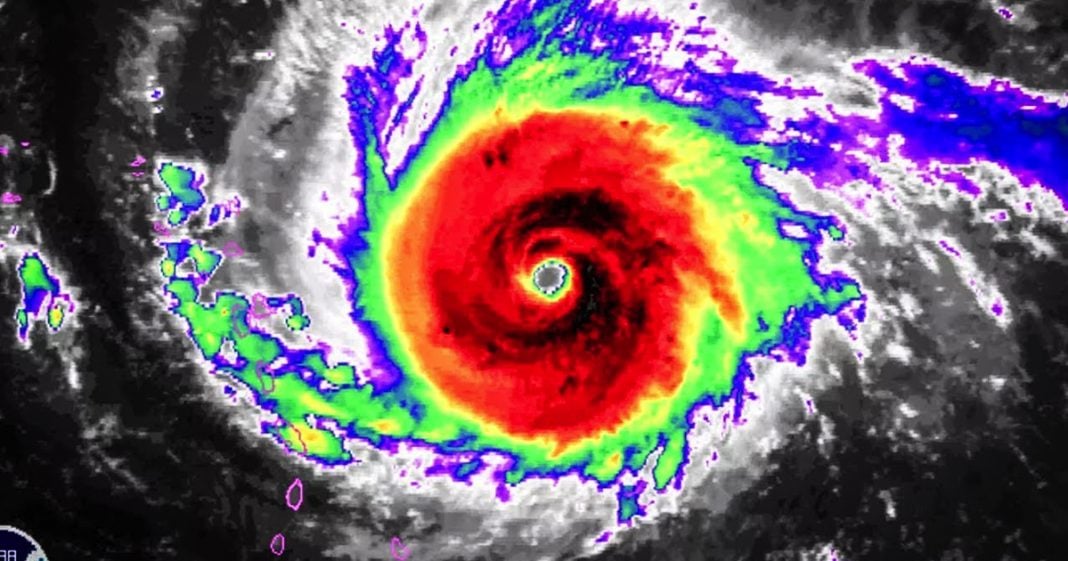 Hurricane Irma is officially the strongest hurricane ever recorded in the Atlantic Ocean. And with it approaching the U.S. mainland just two weeks after Hurricane Harvey devastated Texas, Americans are rightfully uneasy about the effects of these storms. To add insult to injury, draconian budget cuts have put FEMA in peril, and the agency has less than $1 billion left for disaster relief for the entire country (and let’s not forget that a large portion of the country is currently on fire in the West.) Ring of Fire’s Farron Cousins discusses this.

Less than two weeks after hurricane Harvey ravage the state of Texas hurricane Irma is now churning out there in the Atlantic making its way across the Bahamas Puerto Rico, and basically headed directly towards Florida and Cuba at this point where it’s supposed to make a northern turn and essentially go up either the East Coast or through the middle of the state of Florida before continuing on north.

This is very important one because this is the strongest storm ever recorded in the Atlantic Ocean. There has never been a hurricane this intense in recorded history. Secondly, we just got off a major natural disaster in Texas. Half of the Midwest is currently on fire, and that’s something that the media is really not covering very well at all, the fact that there are these massive wildfires throughout California, Washington, Oregon and the entire west of the United States.

A Category five storm which is currently expected to hit make landfall and Category four is devastating, especially when you consider the fact that according to new reports FEMA is almost out of money. According to reports FEMA has about $1 billion left to spend on disaster relief here in the United States. Again, we don’t have aid packages yet for hurricane Harvey. Congress hasn’t necessarily passed what they need to pass to allocate those funds. We’ve done absolutely nothing about those wildfires and here comes a Category four hurricane and FEMA comes out and says, “Hold up Irma. We don’t have any money to help people in the United States.”

FEMA’s job, I don’t know if anybody watching this has ever been faced with a natural disaster had to evacuate, FEMA does a lot of things during any kind of storm or fire or whatever. They come in, they reimburse you for hotel expenses if you have to evacuate up to a certain point.

They cover other expenses that you may have incurred during evacuation. They help pass out food and bottles of water. They set up little remote offices where people have to go and sign up for things. It is a huge ordeal, or it’s a huge hassle I’ve actually been through it many times in my life living along the Gulf Coast. We’re very familiar with the hurricane procedure and how to deal with FEMA, but they’re almost out of money and here’s why.

The federal budget expires every September, and that’s why every September we deal with the fact that Republicans may or may not pass a budget, and we could be headed towards another government shutdown. Currently that’s the case right now, so FEMA has $1 billion left on their 2017 budget and Republicans in the House who run the House are no closer to having a budget in place before FEMA runs out of money.

FEMA could potentially run out of money before Irma even makes landfall here in the United States due to all of the other natural disasters that we’re facing, which would leave absolutely nothing, zero dollars to help the people in South Florida who are about to be hit with one of the strongest hurricanes we’ve seen in decades.

This is not acceptable, because at the same time the budget that has been proposed by Republicans supported by Donald Trump would include massive cuts to FEMA. They want to take money away hundreds and hundreds of millions of dollars from that program because they want to give it to Donald Trump to build a border wall.

We need that money to go to the agencies that are actually out there helping human beings, and it may not be perfect and may not be fully funded and yeah, I know people hate dealing with the government but that is what they do. That is their job. They’re out there helping people trying to put their lives back together. Those of us along the Gulf Coast, those of us who’ve gone through natural disasters understand how important that organization is and how helpful they can be.

They’re out of money and we’re facing one of the worst natural disasters the United States has seen in a very long time, something that could potentially make hurricane Harvey look like a thunderstorm, and nobody seems to care. Nobody seems to want to talk about the fact that the Republicans disgusting budget is going to cripple this disaster response agency.

Then what are we going to be left with? Another group of Republicans in the House of Representatives who can’t agree on what kind of funding relief they should pass for hurricane Irma. We’re going to be dealing with Republicans who say, “No, it’s not my state, why do I care?” We saw Ted Cruz do the same thing with Sandy relief. Then immediately flip flop on Harvey relief. We have no reason to think that anything different than that is going to happen when Hurricane Irma strikes the state of Florida in the next few days.