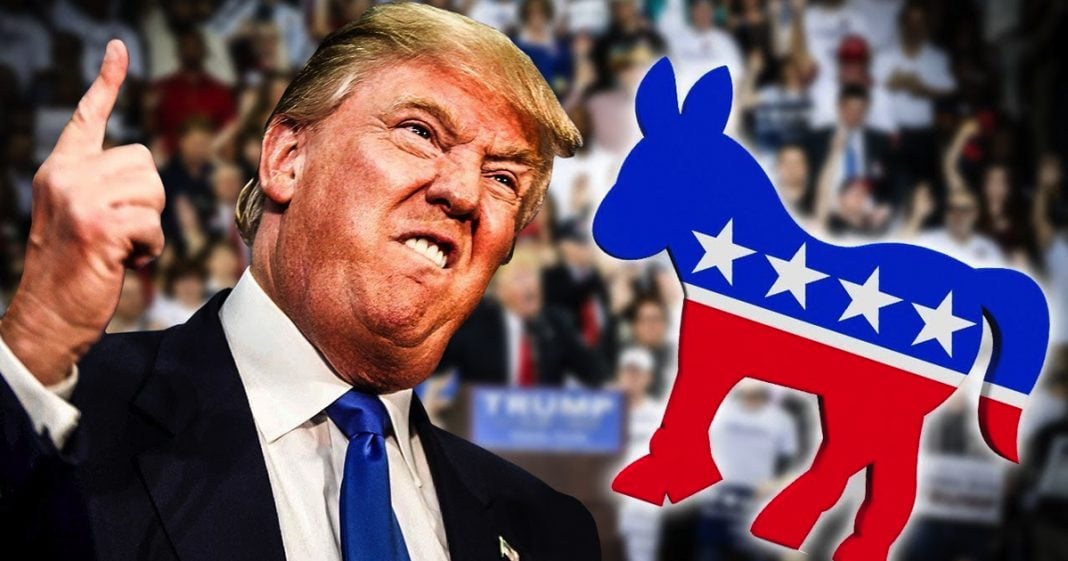 A recent op-ed by a prominent Democratic author claims that Donald Trump has been a “godsend” for the Democratic Party, and that Trump is beating himself with Democrats having to do very little. That’s not a winning strategy, and the 2016 election proved it. The only way to beat Republicans is with policy and the American public has already made that painfully clear. Ring of Fire’s Farron Cousins talks about the many shortcomings of the Democrats’ strategy and why they need to change course if they want to win in 2018 and 2020.

In the last week, I’ve come to the very painful realization that the Democratic Party has absolutely no clue how to deal with Donald Trump and I don’t just mean politically, I mean electorally. With Hillary Clinton’s new book out, we see that clearly she yes accepted some blame, but then she spends the rest of the book blaming everyone else but herself minus that one sentence there at the beginning. Furthermore, this week, Paul Waldman, a very respected progressive writer, liberal Democratic writer I should say, put out an article that says Donald Trump was a godsend for the Democratic Party. In this particular article, Waldman, who is a man that I absolutely admire and respect, but sometimes he gets it wrong just like all of us do, he says that Donald Trump’s complete incompetence makes the Democrats look better.

It helps them look better. It helps them formulate a plan to take on Donald Trump. To an extent, that is true, but if we look back at what happened during the 2016 presidential election, where Hillary Clinton spent 75% of her talking time talking about what a piece of crap Donald Trump is, she still lost, folks. Paul Waldman’s plan here to sit back and let Trump implode himself sounds good on paper. It sounds like somebody put a lot of thought and analysis into this. At the end of the day, it’s been proven to not work. The only thing the Democrats can do to beat Donald Trump and to be the Republican Party, who has an approval rating even lower than Donald Trump, is to talk policy. That is what Hillary Clinton failed to do in the general election and it’s what most Democrats are failing to do today.

You cannot beat this guy by talking about what a scumbag he is or how mentally unstable you might think he is or some of the horrible things that he’s done. The American people are not necessarily stupid. They know the bad things he’s done. They’ve seen it. They’ve been following this train wreck just as closely as anybody else in the Democratic Party. They know it. There’s no need to rehash it. What they don’t know is what the Democratic Party stands for, why we should pick them over the Republicans, what do they have to offer that’s better than what the Republicans have tried to do. Because at the end of the day, a bad plan is going to win out over no plan at all and that’s what happened to the Democrats in 2016.

Paul Waldman makes some decent points in this article. Like I said, he’s generally correct, but overall his theme that we need to just sit back and watch trump implode without necessarily countering with any policy positions is just not feasible. The only way the Democrats can secure a victory in 2018 or in the 2020 presidential election is to get out there and start talking policy. We have seen some Democrats doing this. Why? Because Bernie Sanders has essentially forced them to do it. He is the one who came out with this Medicare for all legislation that Kamala Harris after huge public backlash and public criticism decided to come out and be a co-sponsor of. Those are the kinds of things that Democrats need to get on board with and go out there and talk about.

If they want to talk about how stupid Donald Trump is, that’s fine. Make it a small part, make it your opening line, use it to draw in people, get their attention, but that cannot be your entire message. When it comes to covering all the stupid asinine things that Donald Trump does, let the media handle it. They’re doing a great job with it, believe it or not. Let the bloggers deal with it. You politicians talk policy. We’ve got the Trump thing covered. You need to get to work.