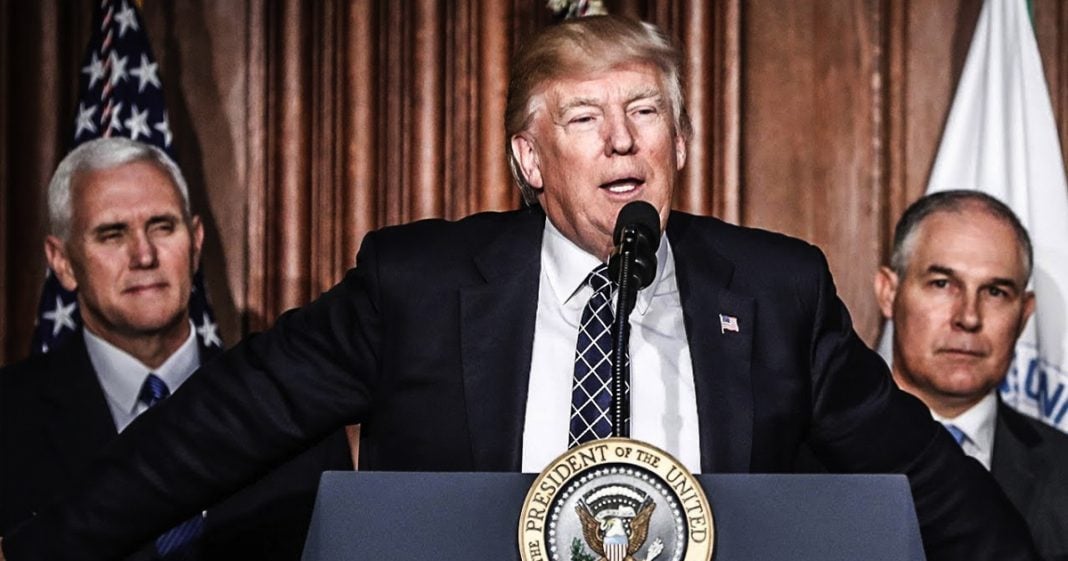 Donald Trump’s EPA has gone after a reporter for covering a story about how superfund (highly toxic) sites have been flooded during Hurricane Harvey, releasing unknown amounts of harmful chemicals into the nearby environment. The EPA is not happy about the coverage, and they want to the media to keep their mouths shut. Ring of Fire’s Farron Cousins discusses this.

One of the more disturbing side effects of the massive flooding that was brought to the state of Texas from Hurricane Harvey is the fact that Texas is obviously home to a lot of oil companies, a lot of oil activities, a lot of chemical companies, and a lot of Superfund sites, which are highly toxic areas where toxic waste resides, where human beings cannot function inside of that little Superfund site. With this massive floodwater has come an insane amount of toxins being released both into the atmosphere and into those floodwaters, that then travels all over the flooded areas, specifically with these Superfund sites.

A few days ago the Associated Press ran a story talking about the fact that the EPA had not yet gone to inspect these Superfund sites on the ground. Meanwhile, the reporters of the story actually did. They saw this toxic sludge seeping out into the floodwaters, going God-knows-where, because nobody within the Trump administration or the Trump EPA cares enough to actually go in there and do something.

What was the EPA’s response to all of this? Instead of saying, “Hey, we understand. We’re working on it. We’re devising a plan,” they decided to issue a press release where they attacked the reporter by name for the Associated Press, saying, “How dare you say that we’re not doing anything or we’re not taking this seriously? We’ve been doing good things with the Hurricane Harvey response, and we flew over a couple of those Superfund sites and we saw flooding in only 13 out of, like, 30.”

That wasn’t the point of the article, EPA. First of all, the EPA has not even said who wrote this particular response. They refused to tell us who wrote it, or who authorized it, or who signed off on it. Furthermore, the reporter specifically said, “You haven’t gone to these sites to see the damage,” and the EPA says first of all, “Reporter, you’re a jerk,” and second of all, “No, it’s okay, ’cause we were in an airplane thousands of feet above it, and we looked out the window and saw what was happening.”

Well, that’s not good enough. It wasn’t good enough for George W. Bush when he flew over the damage of Hurricane Katrina and we got that very sad picture of him looking out a window. You have to go there. You have to find out what’s happening. You have to put boots on the ground to go fix this issue. This is highly toxic, carcinogenic waste that is seeping out into those floodwaters. More importantly, as the AP pointed out, the people rescuing other people in those floodwaters need to know if they’re wading waist-deep through toxic waste, because that is what is happening right now, folks.

We have seen numerous explosions from chemical plants and oil refineries in the wake of Hurricane Harvey which are releasing countless carcinogens and other greenhouse gases into the atmosphere, not to mention releasing them into the floodwaters and into the environment. These Superfund sites are doing the same thing, except on steroids, because there’s no big explosion to bring people’s attention to it. It’s just toxic sludge that slowly melts and dissipates into that floodwater, going anywhere.

This is something that needs to be addressed. We’ve got to clean up these Superfund sites, not just in Texas, but all over the country. We have to start paying attention, and more importantly, everyone, we actually have to start caring about it. Most people in this country don’t even know what a Superfund site is. They don’t know what it means, but it sounds superfun. It’s a toxic waste site that has the potential to poison countless American citizens. We have to get this fixed. We have to start taking care of the environment, because if we let the environment die, human beings aren’t going to be too far after that.