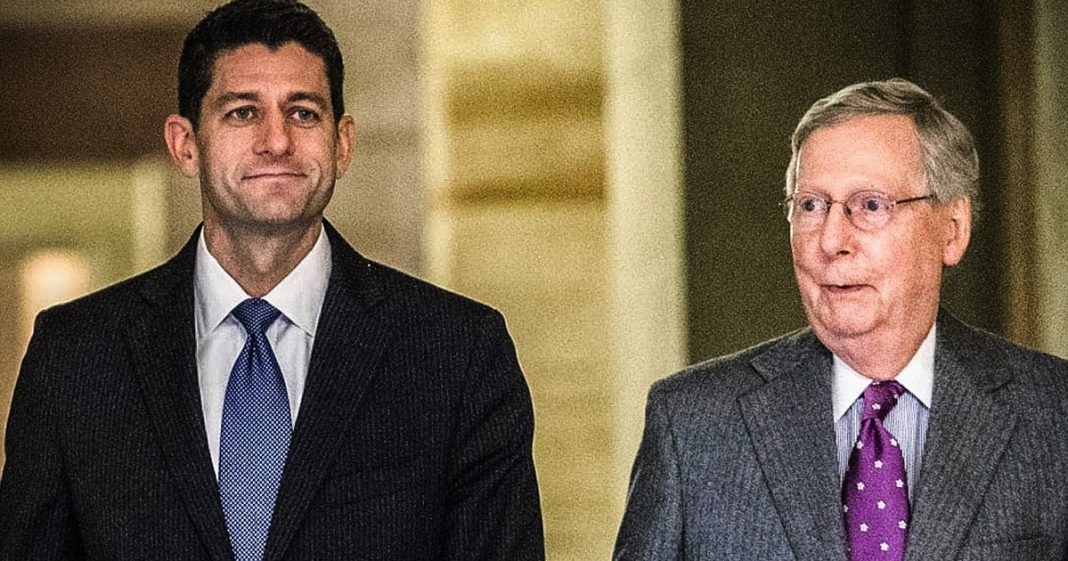 Today marks the first day back at work for members of Congress, and the Republican majorities have some very large messes on their hands. Can they come up with a budget in time to avoid a government shutdown, or will they blow all their alliances pushing for tax cuts for the wealthy? Is healthcare reform really dead, or will they try one more time to take away your health insurance coverage? At this point, inaction is the best action, because this Party has no idea how to lead. Ring of Fire’s Farron Cousins discusses this.

Most Americans today are probably feeling a little sluggish getting back to work after a three-day weekend but just imagine how it would feel getting back to work after a month-long weekend because that is what’s happening right now with the House of Representatives and the U.S. Senate. Today is their first day back at work following their month-long August recess where some of them just completely disappeared from the limelight altogether. Some of them held Town Halls. Some of them went and helped with Hurricane Harvey but everybody’s back at work today and they have a hell of an agenda that there is no possible way they can actually tackle. Here’s a few of the things that the Republican-led House of Representatives and the Senate have to deal with now that they are back in washington, D.C.

First and foremost one of the most important things is they have to get Hurricane Harvey relief packages passed and while you’re at it, you may as well go ahead and throw in some relief packages for Hurricane Irma which is right around the corner headed towards Florida at the moment. Furthermore, you’ve got to get some kind of budget passed so that we avoid a government shutdown. A government shutdown at this point, which unfortunately is looming because there doesn’t seem to be any kind of clear reconciliation in the budget in the House of Representatives, could cost the U.S. economy hundreds of millions if not billions of dollars depending on how long such shutdown actually lasts. So we’re looking at catastrophic economic impacts if these Republicans can’t get their act together and pass a budget. Trump himself has said he will not sign a budget if it does not include funding for the border wall.

So, so far, the Republican’s plan has been to cut money from agencies like FEMA who’s currently working overtime in Texas and will be doing the same thing probably in Florida or wherever else Hurricane Irma hits. They want to cut half a billion dollars from that and give it to Donald Trump for his wall. Congress can’t do this, especially not at this point, and furthermore the Republicans have proven time and time again so far this year, that they can’t even work with one another to get anything passed. Want an example? How about the health care bill that had to go through constant revisions because different factions within the Republican party were fighting with one another over who could make the bill more cruel. The bottom line is this. The Republicans in D.C. right now have a hell of a lot of work to do just to keep this country going, not even trying to enact their Republican agenda but just to keep things functioning.

I do not trust them. Polls show the public does not trust them enough to actually get their jobs done. Because beyond all the partisan fighting in this country, there are some times when Congress has really non-partisan, normal everyday keep-the-government functioning work that they have to do. So far the Republicans have been so poor at leadership that they can’t even accomplish that. We’re headed towards a government shutdown. It does not look like the Republicans are going to do anything to prevent that because they can’t work with one another and they can’t work with their sociopathic president. But that’s where we’re at today, folks. I hope the Republicans got a lot of rest on their August recess because they’re going to have to put in a lot long hours if they want to keep this country moving long enough so that we can continue functioning as a society, as an economy and as a democracy.