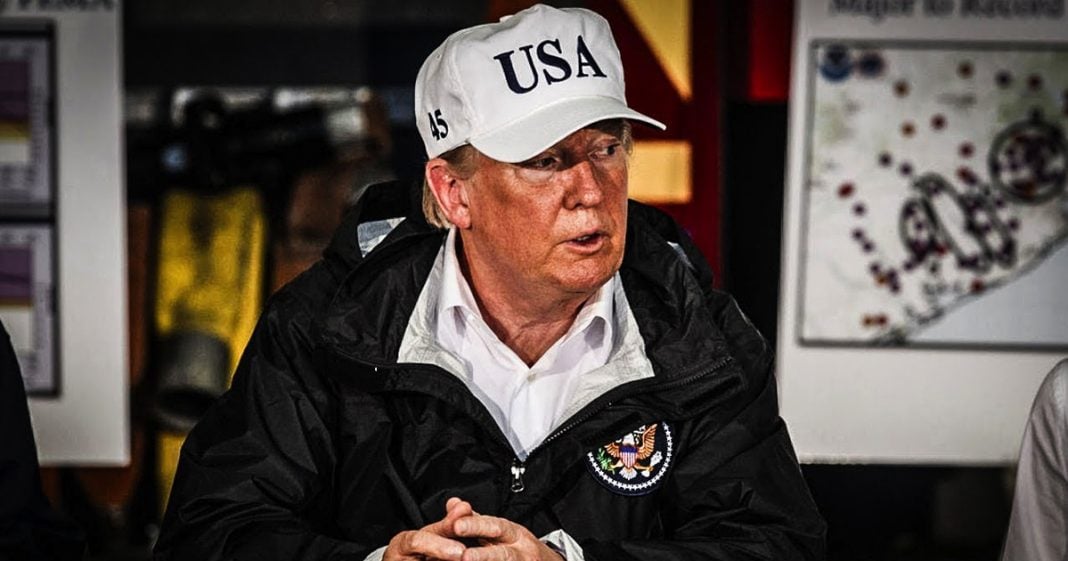 The corporate media doesn’t know how to cover Donald Trump. In their eyes, as long as he isn’t doing anything completely psychotic, he’s suddenly acting “presidential.” That praise was once again heaped on the president by the media after he went back to Texas this past weekend – a week after the storm hit – to finally meet with victims. Ring of Fire’s Farron Cousins discusses this.

This past weekend, Donald Trump went back to Texas. And this time, he finally met with victims of Hurricane Harvey. He gave the impression, at least for the cameras, that he was helping out in some way. A picture surfaced of Mike Pence in the last few days clearing out some fallen trees and helping people get back on their path.

Just because Donald Trump gets his act together and doesn’t act like a complete psychopath for 30 seconds does not mean that this man has suddenly become presidential or that he understands what it means to actually act like a president.

That is not what happened this weekend. What happened this past weekend was that his advisers got ahold of him — General Kelly I’m sure — explained to him why he has to do this, what he needs to do for the cameras, and then he can come home. Because his first trip to Texas was an absolute disaster, and even this recent one didn’t go much better.

He told people in evacuation shelters to have a good time. That’s not presidential, yet the media — including both MSNBC and the Washington Post, two outlets that Donald Trump allegedly hates — referred to him as presidential or said that he was finally acting like a president. This is not acceptable behavior from the media in the United States.

As Bob Cesca at salon.com points out, what this does is to anesthetize the American public to the disgusting behavior of Donald Trump if all it takes for him to be claimed presidential is to just go a few minutes without doing something incredibly stupid. That’s not being presidential, that’s being a human being. Nobody walks around all day long acting like a complete moron. Occasionally, they sit quietly and do nothing. And that’s basically what Donald Trump pulled off this past weekend, but it was enough to get the media to say that he was presidential for even just a few minutes, there, while helping out those poor victims in Texas.

Let’s get this straight. What Donald Trump did this weekend by going back to Texas was only about Donald Trump. It was not about the victims. We still haven’t seen any evidence that he actually intends to donate that one million dollars that he said he was gonna donate. Meanwhile, celebrities with far lower net worth than Donald Trump has have given one million dollars. Or two, or five, or 10.

Donald Trump can afford a hell of a lot more than one million dollars, but more importantly, he could also go back to D.C. and demand more funds for disaster relief. He’s the one who helps with the budget cutting with the House of Representatives, so him giving personally a million dollars — which, again, hasn’t even happened yet — means absolutely nothing when he’s cutting hundreds of millions of dollars in disaster relief funding for the United States.

Donald Trump did not act presidential this past weekend. He has never acted presidential, and he will never act presidential. And it’s time for the corporate media in the United States to finally get that fact through their skulls.