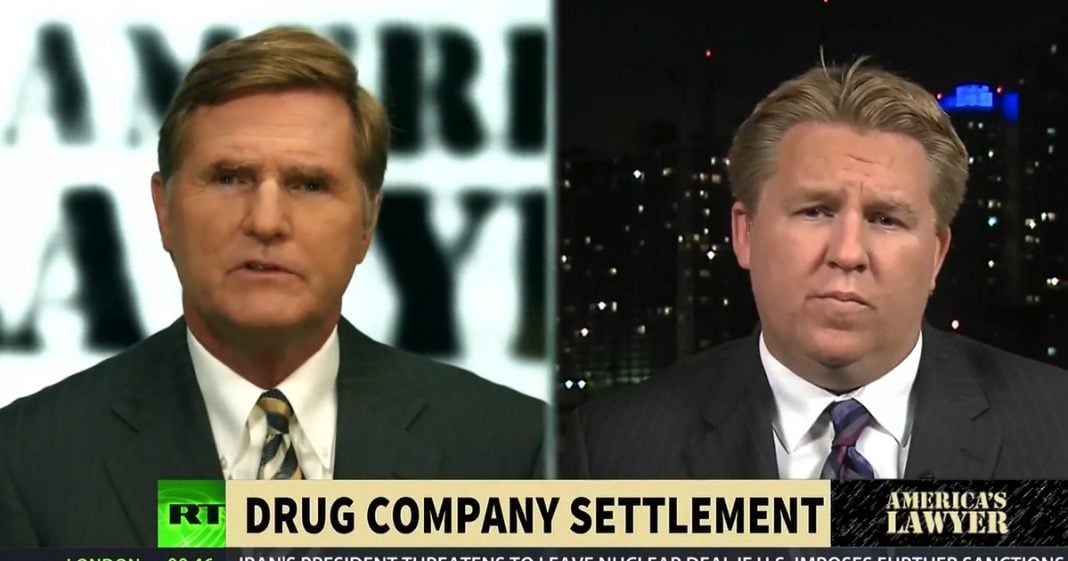 Via America’s Lawyer: Mike Papantonio talks with attorney Daniel Nigh about a Japanese drugmaker agreeing to pay up to 300 million dollars to settle 2,000 U.S. cases against them.

Papantonio: A Japanese drug maker is agreeing to pay up to $300 million to settle 2,000 U.S. cases against them. These cases, which amount to over 2,000, are accusing the company of failing to warn users that its blood pressure medication, Benicar, can cause serious gastrointestinal illness. Joining me to talk about this is Daniel Nigh.

Daniel, first of all, I guess, kudos to the corporation that is willing to stand up and say, okay, let’s try to make this right with consumers. We’re not used to seeing that in this business. Most pharmaceutical manufacturers, no matter what their conduct is, will do everything they can to avoid making the consumer that may be suffering some illness from their product, to avoid actually paying that consumer for those kinds of damages. I think I want to begin this by saying kudos to the management of this corporation, who said we saw something wrong, we’re trying to correct it. What’s your take on that, Daniel?

Daniel Nigh: I agree. It’s nice to see that the company has realized the mistake that’s been made here and realized the number of people who have been injured by this. We believe that there’s going to be upwards of 2,500 claims that are made as a result of the problems with using Benicar.

Papantonio: Tell us, exactly what was Benicar used to treat? This is a very popular medication, and what were the results of that treatment?

Papantonio: What’s the science behind the drug? What’s happening? What do these studies show about the potential bad effects that Benicar has been able to demonstrate with its use?

Daniel Nigh: After the Benicar is ingested, when it’s being metabolized in the small intestine, it kills off the villi in the small intestine. The villi are the red blood cells that are responsible for absorbing the vast majority of food and water into our bodies. For these patients, when their villi is killed off, all their food and water is running right through their body. Of course, it causes massive diarrhea, but it’s so much more serious than that.

A person not being able to absorb their food and water into their body is causing severe malnutrition, dehydration, and we’re oftentimes seeing our clients landing in the hospital as a result of renal failure and other very significant problems.

Papantonio: Celiac disease, it actually resembles a celiac disease, from what I understand. That’s not just a short-term problem, that’s a long-term problem for some of these patients, isn’t it? Oftentimes, they become completely disabled for long, long periods of time with a celiac type of disease.

Daniel Nigh: That’s right, it does mimic celiac disease, because celiac disease also kills off the villi inside of somebody’s body when they ingest gluten. This has a similar reaction, and there are a lot of clients out there who may still not realize that Benicar is causing their problems. They were told by their doctor that they have celiac disease, whereas the entire time, it very well could have been that it’s just Benicar.

When they go off the Benicar, your villi will oftentimes regenerate and then you’ll be able to start to absorb food and water again. We have clients who have been hospitalized upwards of over 90 days in the hospital, never realizing that it was Benicar the entire time. They thought they had celiac disease. Once they were finally informed that Benicar was the culprit of their problems, they got off the Benicar and they saw a substantial improvement thereafter.

Papantonio: What I find so remarkable about this particular fact situation, Daniel, is that you, I remember you finding these facts, you finding this connection between Benicar and these types of gastrointestinal, very serious gastrointestinal diseases. I just have to ask myself, why wouldn’t a doctor, why wouldn’t the doctor who is in the business of prescribing medicine, how does it happen that they typically aren’t up with the latest information about the bad illnesses that might be caused by any particular drug? How does that happen that the very GP that might be treating this person doesn’t even know that there’s tons of material out there on the market that says this is what you need to be aware of? How does that happen?

Daniel Nigh: It’s really quite surprising. The warning label was changed to reflect that it can cause these spur-like enteropathy changes or serious gastrointestinal issues inside of a person. We’re seeing all the time that, even as of today, people are still on the Benicar, they’re asking their doctors about this problem, the doctors are just downplaying it, they don’t understand that Benicar could be the culprit of their serious gastrointestinal issues.

I think what’s happening is a general practitioner has so many different medications that they’re prescribing day in and day out, that they’re not realizing the side effects of this issue. The other thing is, the people that are treating for the problem, the gastroenterologist, those treaters are not the ones responsible for prescribing this medication. When that occurs, we oftentimes see that the information doesn’t trickle down to the right folks.

Papantonio: Isn’t that another part of it? You’ve got somebody sitting at home, they see advertisements on television. As they’re watching the nightly news, typically they’re watching 11 drug company advertisements just in the nightly news. The only other country in the world that even allows drug companies to advertise is New Zealand. Aren’t we seeing the bad effects of that? Aren’t we seeing where, used to be, a doctor had to understand something, they had to do the research, they had to do the hard work to figure out, what was the drug for this person?

Now we have patients walking into the doctor’s office saying, ‘I want this drug because I saw it on the nightly news last night. I’d like to try it.’ Isn’t that a huge part of the problem here, that we’ve got, they’re selling drugs like they sell soap in the United States, and they don’t allow this to happen any other place except New Zealand. It’s a disaster for patients, and for doctors, if you think about it, isn’t it?

Daniel Nigh: That’s exactly right. Doctors are getting it from all directions now. They’re getting it from patients coming in, requesting certain drugs that they saw in a commercial. The other route is the sales reps of the pharmaceutical companies are very aggressive, because they’re making a profit themselves on everything that they can get the doctor to sell. That’s the other part of the equation that becomes a real problem. Pharmaceuticals are all about sales and less about treatment.

Papantonio: Daniel, thanks for being out there. Thanks for your hard work on this case. But for your efforts, and for a corporation that is reasonable, they do want to take care of the consumers they’ve affected, and again, I say kudos to that corporation. Thanks for joining me.

Daniel Nigh: Thank you, Pap.