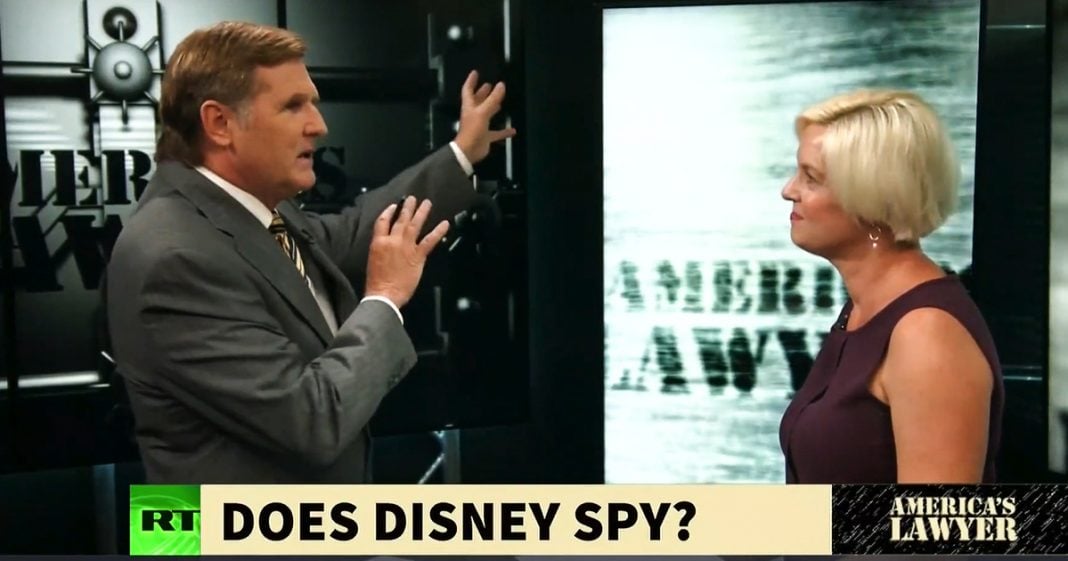 Via America’s Lawyer: Mike Papantonio is joined by Mollye Barrows, Legal Journalist for The Trial Lawyer Magazine, to dive into the details of a class action lawsuit in California alleging that Disney is violating privacy protection laws by collecting children’s personal information from 42 of its apps.

Mike Papantonio: Walt Disney Company is facing a federal lawsuit for secretly collecting personal data from kids who were using one of their numerous gaming apps. The lawsuit alleges Disney shared that data illegally with advertisers while they never once sought out the approval of parents. Joining me now to talk about this is legal journalist, Trial Lawyer Magazine journalist, and very good legal writer, Mollye Barrows. Mollye, what exactly does the lawsuit allege that Disney’s doing this time? I say, this time, because they’ve been in the news quite often lately.

Mollye Barrows: Yes. You’re exactly right. Actually, and not too long ago, they were in trouble for something similar to what they’re doing now. This lawsuit, a federal class action lawsuit filed in California, alleges that Disney and some of the software companies that work with them on these gaming apps were illegally spying on these kids, learning their habits, gathering information, and then turning around and selling it to third party advertisers and marketers, who are trying to target these kids elsewhere online, or perhaps even their parents, because a lot of times they’re on their parents’ digital devices.

Mike Papantonio: Yeah, isn’t this kind of a backdoor to the parents?

Mike Papantonio: In other words, information is what Disney was after. Now, let’s not limit the information to what the child has in his school lunch. The information goes on to, where does mommy and daddy bank?

Mike Papantonio: What kind of car do they drive? This is nothing more than just a black hole that leads right in to the parents’ life, the entire family’s life. I don’t understand. If you look at this, if we had a stalker, let’s say we just had some character out there stalking our child, trying to find out information about our child, aren’t there laws against that? I mean, there’s some stalking laws.

Mollye Barrows: Absolutely. Yes. You would be held accountable criminally, even just for the intent of trying to deceive or pursue somebody in a predatory fashion.

Mike Papantonio: How is this different? I’m not following it, other than it’s a corporation. Isn’t that the difference here?

Mollye Barrows: Correct. And this Children’s Online Privacy Protection Act, which basically says any company that markets technology, like these gaming apps, to children under the age of 13 have to get parental permission, verifiable parental permission. Basically, they’re saying that that’s not what Disney’s doing, nor the software companies that helped them build these game apps. It’s not just this one game app. It was one in particular that was by far doing the majority of the stealing of the information, according to the lawsuit, but it was more than 40 gaming apps. They’re collecting a lot of data. As you know, that comes up in any number of lawsuits and accusations of companies stealing your information. Anytime you download an app, they want access to your photos, your contact list, this that and the other. As you know, you can gather so much information about people’s spending habits, and then target ads accordingly. That’s what they think that they’re doing. They just want them to obey the law.

Mike Papantonio: If I had a hacker move into Disney’s computer, and I start extracting information about Disney, where are they investing? Where are they putting their money? What have they been up to in the entertainment business? I’d go to prison. There is no difference here. They’re hacking by way of moving into these people’s lives with a computer game, for god’s sakes.

Mollye Barrows: Children especially, because they’re the easy ones to target. It seems innocent enough on the outside. Again, any time you download an app, whether it’s a child doing it or an adult, at least the adult has enough awareness to say, ‘Hey, maybe I don’t want to download this app,’ or, ‘I don’t want to do this, because the information that they want access to is not something I’m comfortable with.’ Kids, if they’re not getting permission from their parents who are looking over their shoulder, ‘Yes. I just want to get to Palace Pets, and I just want to play.’ Of course, if they’re on a parent’s device, they’re going to be able access all that information. This lawsuit just wants them to obey the law, but maybe that law needs to be … They need to take another look at that Children’s Online Privacy and Protection Act, I think, because it’s come up before in other stories we’ve done here on America’s Lawyer.

Mike Papantonio: I’d like know how many times Disney has had people prosecuted for going into their private business. This is just another double standard that we see so often.

Mollye Barrows: Disney, of course, defends themselves, just to give-

Mollye Barrows: The other side. They say that this is just a misunderstanding of COPPA, which is that Children’s Online Privacy Protection Act again. They are looking forward to defending themselves in court.

Mike Papantonio: Oh gee, we didn’t know. How could we understand that? We only have, what? 10,000 lawyers who work with us.