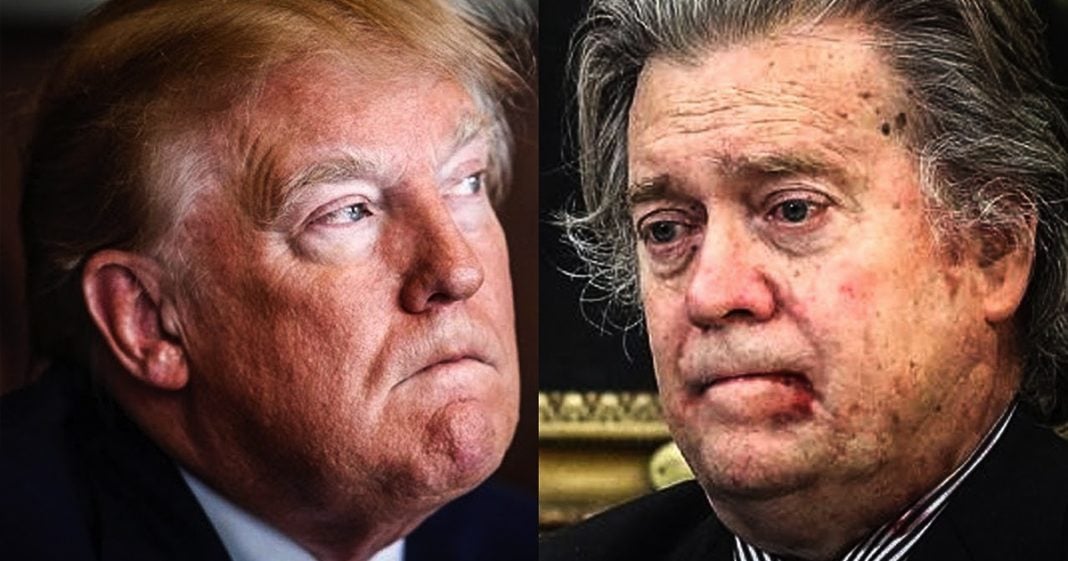 According to a new report by The Washington Post, Donald Trump still makes frequent contact with ousted adviser Steve Bannon from his personal cell phone when his new Chief of Staff John Kelly isn’t around. This proves that Bannon (and Breitbart’s) influence over the White House hasn’t actually disappeared. Ring of Fire’s Farron Cousins discusses this.

Most Americans were overjoyed when Steve Bannon was fired from The White House, but as it turns out, his influence hasn’t quite left Donald Trump. According to new reports, Donald Trump likes to call Steve Bannon on his personal cell phone when he thinks that his new Chief of Staff John Kelly isn’t around or looking over his shoulder to know that he’s still calling Steve Bannon for advice on issues.

Now according to this new report by The Washington Post, Steve Bannon is not the only outside advisor that Donald Trump is seeking advice from, but he’s obviously one of the most important because it shows that white nationalist influence that Bannon had on The White House is still there. Bannon’s influence, Breitbart’s influence, has not stopped because Donald Trump is still reaching out to him. There could be several reasons as to why Donald Trump still feels the need to pick up his phone and call Bannon.

The first and foremost being, he probably wants to maintain a good relationship with Steve Bannon because he knows if he doesn’t, if Bannon gets pissed, he’s going to start leaking all of the horrible things that went on behind the scenes with the Trump administration, something that Bannon knows first hand. Second of all, he wants to maintain a good relationship with Breitbart, because if Breitbart turns on him, that’s going to turn the alt-right against Donald Trump and kill any chance he may have to run another successful election, should he survive, politically, until the next election.

More importantly, it shows that Donald Trump is the kind of guy who does not care what people who are smarter than him have to say. In this case, John Kelly. John Kelly came in as the new Chief of Staff and he tried to tighten things up. He tried to reign Donald Trump in and make him slightly more likely for the American public, trying to cut back on his Tweeting, cut back on the amount of fake news that he is actually exposed to, meaning Fox news and Breitbart. Behind the scenes Donald Trump doesn’t care what John Kelly says or does because he’s still going to do whatever the hell he wants to do anyway. These phone calls that he’s making to Steve Bannon prove that. At this point, the only question is how much longer with John Kelly decide to stay in this position if he knows that Donald Trump is not listening to him.

On Friday morning, Trump tweeted out some praise for John Kelly saying what a great job he’s doing because obviously he understands that Kelly’s getting really fed up with the fact that he’s trying to make Donald Trump a better person, but Trump simply doesn’t want to make himself any better.