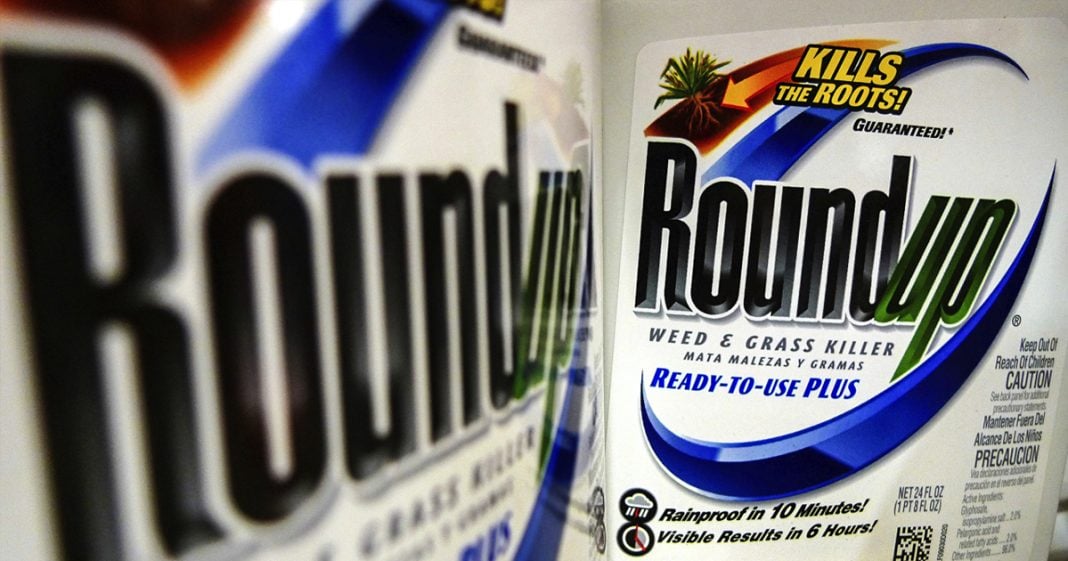 Sam: So, Farron, before we talk about the really blockbuster news from this week regarding Monsanto, let’s go back and talk about the history of the EPA and Monsanto’s Roundup, which of course is known as a glyphosate, which is the active ingredient in Roundup. Just give us some background so that people understand where we are as of this week with the release of these documents, what that means. But just give us some background on Roundup.

Here’s the kicker on this. That happened just about six months before GMOs produced by Monsanto hit the market. And those GMOs, people need to understand, were basically created so that Monsanto could sell the seeds that were resistant to Roundup, then sell Roundup by the barrel for them to go dump on all of the crops. The crops wouldn’t be hurt. It’s going to kill all the weeds. Less tillage, less work for you, if you buy our seeds and our poison. They have quite literally and figuratively at this point made a killing off of everything Roundup and Roundup-Ready related since that initial decision change in 1991.

Sam: Roundup-Ready is the term that we basically use when we’re talking about an agricultural product that is designed to be resistant to Roundup, as opposed to, I guess, theoretically the weeds around it. Now, so, every 15 years, federal law … And it’s at least 15 years … The longest period of time a pesticide or an herbicide can go without being reviewed again is 15 years, and they really pushed it to the limit, didn’t they? The EPA just started looking at it again, I guess, last year.

Farron: They did, and here’s the thing that’s happened since then. We have seen study after study. We’ve had the World Health Organization come out and designate this as a probable human carcinogen. The IARC Agency has come out basically said the same thing. Independent studies from universities, from independent scientists, they’re all coming to virtually the same conclusion, and that is that there is a higher instance of specific cancers like non-Hodgkins lymphoma along with a whole host of other diseases that are related directly, according to these studies, to exposure to Monsanto’s Roundup.

So, finally, the EPA once again came back and said, “Okay, I guess we’re a little past due on this issue, so we’re going to look at it again,” and that’s one of the reasons why Monsanto has once again found itself in the headlines. Not because the EPA is reviewing it, but because of what they’re trying to do with the EPA while they’re reviewing this particular herbicide.

Sam: Okay. So, last December, literally the last month of the last year that the government was required to review this product, and people have to understand that an extraordinary amount of our soy in this country, of our corn in this country … I don’t have the figures off the top of my head. You may know it, but it’s well over 70% of each of those are Roundup-Ready products. The corn, the soy. There’s others, but the amount of Roundup that is used in this country is extraordinary. But, nevertheless, the EPA takes the longest amount of time possible before they review, and then what do they do? They empanel an outside committee?

Farron: Yeah, and that’s one of the things that’s really frightening about what’s happening with the FDA as it currently stands is that they do rely a lot on outside committees. We bring in outside panels of experts, of scientists, and now more and more, and this is happening with Monsanto right now … They’re bringing in industry insiders. Allegedly chemical experts that all have ties back to the industry, and Monsanto has been doing everything possible to stack the deck. They’re trying to put their own people into these EPA advisory panels. People that they’ve paid. People that have been consultants for Monsanto, working on their own in-house studies. People that they’ve had rewrite studies in a more flattering light to show that glyphosate is not necessarily carcinogenic, or that the effects aren’t as bad as people think. These are the same people Monsanto is actively working with to get them placed into these EPA panels, or at the very least, from what we know, have them in that EPA panel’s ear telling them, “Well, look at this study. Look at our own studies that show that this thing is not harmful.”

They have a very captive audience there with the EPA right now, and especially with Scott Pruitt at the head of it who wants to replace scientists with industry insiders. Things are looking incredibly like they’re going to go in Monsanto’s favor, unfortunately, with what we have in this country right now.

Sam: All right. And so we should say I think there were 15 experts on this panel, and eight of them early on really expressed a concern about the EPA’s view of glyphosate as being so benign. I guess EPA came out with a report on the peer review, which was about a month or two ago. Maybe in March. Basically, where are we at with that?

Farron: Right now with that peer reviewed paper, the results of that are kind of in question because what we’re finding out at the moment is that Monsanto has been actively working, and I guess for lack of a better word, colluding with the EPA to downplay the negative health effects of glyphosate. Recently, in fact, this past week on Tuesday morning, a massive document dump took place as a result of the ongoing litigation against Monsanto where 75 different documents came out, released to the public, showing the different communications between Monsanto employees and scientists. Some of them with people who had connections at the EPA, connections to scientists, showing that they were working to downplay studies. You had employees of Monsanto in some of these communications telling their superiors, “I’m not comfortable with this. I’m not comfortable with downplaying these results or bastardizing this particular science.”

So, right now with what is happening at the EPA, I hate to sound like such a skeptic at this point, but we can’t necessarily trust it because Monsanto’s own documents show they have been infiltrating, I guess, and influencing them for several years at this point. This is not something that’s unique to the Trump administration. This is something that’s been going on for a very long time.

Sam: All right, Farron, we’re going to take a quick break. When we come back, I want to hear more about this because these documents that have been released … They’re unprecedented, the release of these documents. And like you said, they show what is know as regulatory capture and the implications of it are that literally hundreds if not thousands of people may have contracted some form of cancer because of the EPA has basically been partners in hiding information that Monsanto may have known the damages that Roundup could cause.

We’ve got to take a quick break. We’ll be right back with more. I’m Sam Seder. This is Ring of Fire Radio.