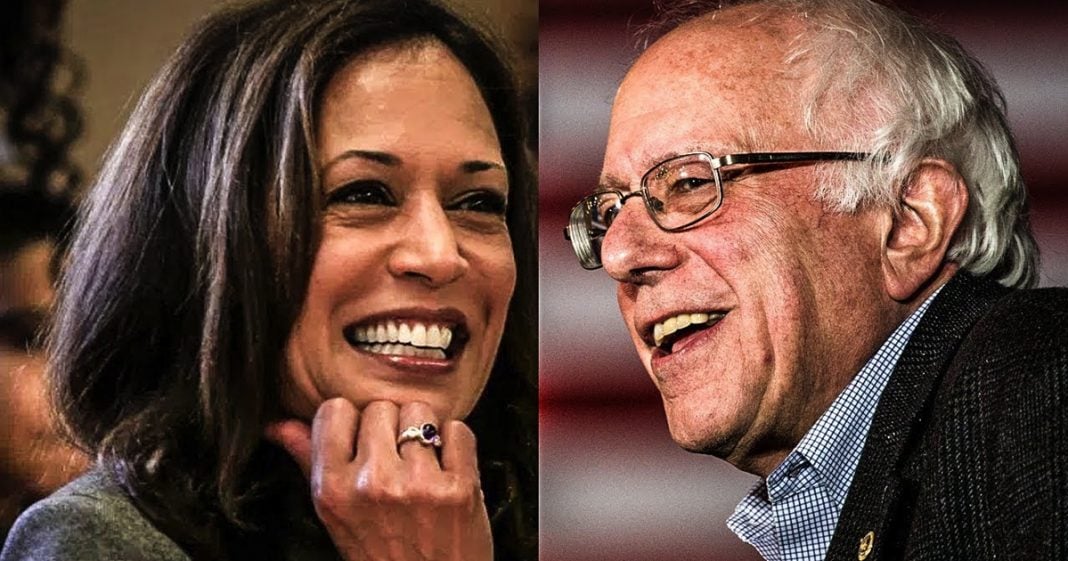 Democratic Senator Kamala Harris announced this week that she would be signing on as a co-sponsor of Bernie Sanders’ “Medicare for All” legislation that would provide a government option for health insurance for Americans. This shift shows that the push by progressives is working, and as long as we keep pushing, we might be able to force more Democrats to the left. Ring of Fire’s Farron Cousins discusses this.

Earlier this week, Senator Kamala Harris announced that she was going to sign on as a co-sponsor for Bernie Sanders’ Medicare-for-all health care bill. This is a huge victory for Progressives in the United States. There’s been a lot of chatter about Kamala Harris in the last few months. The DNC appears to already be propping her up as a potential 2020 candidate. That doesn’t sit very well with Progressives. We need to be the ones that choose our candidate, not the donor class, but the fact that people were worried that she wasn’t progressive enough, that she was too much of a centrist, and they called her out on it, is what ultimately led her to shift further to the left to support and sign on as a co-sponsor of this particular piece of legislation.

Here’s why this is so important, several reasons here. First and foremost, Progressives did this. Kamala Harris did not wake up one morning and have a sudden change of heart and realize, “You know what? Health care is a right. I’m going to do this.” She saw the public backlash. She saw the criticism coming from Progressives. She saw people pushing her to the left, and understood that she needs to do this if she wants to further her political career. I’m not saying she only did it for political gain. I do believe that she believes this now, that she understands that people want this, so whatever her motives are, we have to understand that it was the push from Progressives that made her go further left.

Second of all, Kamala Harris is friendly with the establishment Democrats. If she is getting onboard with this piece of legislation, it’s going to be more likely that she’s going to be able to pull other establishment Democrats into the fray and get them to sign on as well. While it likely will not pass to the Republicans controlling the Senate, it is a phenomenal start and it is a great piece of legislation to take back to your voters, to put back in front of voters in the 2020 presidential elections and say, “Look what we tried to do. You know what we’re trying to do for the American public, because it’s right here in this legislation. Give us the power and we’re going to make this a reality,” because once you go forth with it, you can’t go backwards.

That’s what’s so important about this. This is a stepping stone from which we will not climb back down. We have set the bar now. Kamala Harris, more of an establishment type, along with Bernie Sanders, about as left as possible, have united. That’s what we need right now. We need leaders who understand that Bernie Sanders and his supporters are not going to move to the center, so you’d better move further to the left like the Democratic Party used to be and start supporting these truly Progressive pieces of legislation that actually benefit the American public. Remember, the Democratic Party wasn’t always like this. We didn’t used to have to push people to the left. This was a phenomenon that came along with Bill Clinton in his policies of centrism, the new way, the third way, whatever you want to call it. He started this. The Democrats continued to move slowly and slowly further to the center after his presidency, and we’re taking them back.

We’re taking it back to the days of FDR, when we enacted policies that benefited the public, when we punished corporations for screwing over their workers, or breaking laws, or polluting the environment. That’s what we’re trying to get back to, what the Democratic Party used to be and what it should be, and what it could be again as long as those Progressives out there continue to push and we fight back against those know-nothing establishment pundits who go out there on Twitter every day and demonize people who support Bernie Sanders and his policies, because now one of those people is Kamala Harris.