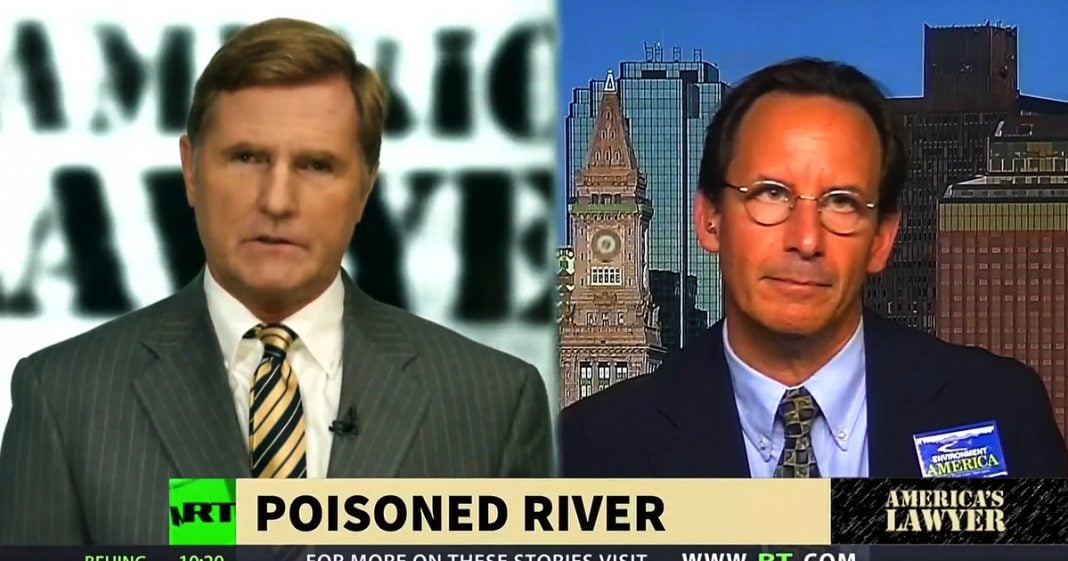 Via America’s Lawyer: Mike Papantonio talks with Environment America’s John Rumpler, about how a federal judge approved a settlement for damages that came from DuPont’s mercury contamination of the South River in Virginia.

Mike Papantonio: DuPont is set to pay more than $42 million to restore the South River and the wildlife along that river. They’ve been poisoned. One of the former plants in Waynesboro, Virginia was responsible for that. High levels of mercury were detected in the 1970s, making it dangerous enough that you couldn’t eat the fish in that area for many years.

Joining me to talk about this is John Rumpler. He’s an attorney with the Environment America. John, my first question has to be how mercury poisoning in a river and the fish swimming in it could still be a problem since these dangerous levels of mercury were discovered in the 1970s. How are we still having to worry about this? Why are people along there still having to fight this problem? Why hasn’t government done something about this?

Mike Papantonio: Yeah, I’ve dealt with DuPont in the C8 litigation up in Ohio all along the Ohio River Valley, and here’s my take on it. Tell me if this sounds familiar. It’s as if the company understands that they can externalize all of their risks. They can simply put their garbage into somebody else’s property. It’s the equivalent of one neighbor saying, ‘You know, I really don’t want to have to pay for sewage. I think I’ll dump it in my neighbor’s pool.’ That’s called externalizing risk. You’re just shifting the risk, and in the end, the tax payer has to pay for this. Isn’t that exactly what happened here? DuPont says, ‘We’re just going to take the cheapest route. We’re going to let tax payers pay for it. We’re going to run the risk of harming the health of citizens all in that area.’ Mercury’s extremely dangerous, causes all types of physical illnesses, but they let this go on for decades. What’s your take? Isn’t this purely simply externalizing risk and cost?

John Rumpler: Absolutely. This is a classic example of a polluter externalizing risks, as you say. And let’s remember that this particular dumping episode, all of this happened before our landmark environmental laws like Superfund, the Clean Air Act, the Clean Water Act, the Safe Drinking Water Act, and so forth and so on. These laws are designed to ensure that polluters cannot just shift the risk and dump their pollution on the rest of us. That’s why it’s so important that we enforce these laws and enforce the ability of ordinary citizens to go to court and get justice when those laws are broken.

Mike Papantonio: But let me ask you about the justice. Look, if I did this to my neighbor, I said, ‘You know, I got some kind of mercury business. I don’t want to have to deal with doing what I should to clean.’ But I put it into my neighbor’s aquifer. I could go to prison for that for decades. They could throw me in prison. Now, the truth is we know who made these decisions. The documents are going to show it. Everything is going to lead us in the right direction of who’s responsible for this. What has the Department of Justice done, if anything, in regard to what’s happened here? We’re talking about killing entire species along this river. What’s your take?

John Rumpler: I’m unaware of any criminal prosecutions in this matter. The settlement that you referenced earlier does require DuPont to pay more than $42 million to start cleaning up this mess. And I’m not suggesting that that is sufficient or enough to deter polluters from similar actions, but I do believe it is an important step in the right direction by Fish and Wildlife Services and the state of Virginia.

Mike Papantonio: Don’t get me wrong, good job. I’m glad that was accomplished. But at one point, don’t we have to change cultural tendencies? Somebody’s got to go to jail when they hurt people. Somebody has to go to jail when they destroy our commons and they know they’re not supposed to. This is a company that made $42 million while you and I have been having this conversation. So if you have a company that’s a repeat polluter, time and time again you see them doing the same thing, at some point don’t you say, you know, we got to have a perp walk for somebody so maybe the next generation will say, ‘I remember the story of Uncle Joe having to spend five years in prison for making this wrong decision. Maybe I shouldn’t make that decision.’ What is your take on that? I know you are very successful in the area of environmental law. Thank you for what you do. And you’ve been so tied into it, I want to know your take…

John Rumpler: Criminal penalties in addition to settlements for clean up are warranted. I think that the deterrence value that you talk about is critical, and we see this across all kinds of industries. You were just talking about the drug industry a couple of minutes ago. We could talk about Wall Street and so forth and so on, but certainly the pollution of our rivers, our lakes, our streams, even the sources of our drinking water are serious enough threats to our health and our natural heritage that, for sure, individuals culpable should be held accountable to the maximum extent of the law. I agree with you there.

Mike Papantonio: We see so many times, I could name half a dozen cases I’ve been involved with where there’s been big companies, DuPont-type companies, Dow Chemical kind of companies, where you see the media unwilling to jump in there and really tell the story because of political influence. DuPont has political influence with this representative or this senator, a regulator. The media won’t pick up on the story because DuPont may be a huge advertiser for them, and every night they’re appearing on the news, and somebody up on the 50th floor who does the number account says, ‘Gee-whiz, we can’t run that story about DuPont because they’re an advertiser.’ Did you run into any of that with this story? Because I got to tell you something. I did not know about this case. This is the first information I have about this case. And I’m a person that’s involved with environmental cases often. What’s your take?

John Rumpler: I can’t comment on this particular case. I’m unaware of any particular influence on media outlets to refuse to cover, but I would say that oftentimes, state and local officials and media outlets are not necessarily jumping on a story about a big polluter that’s threatening drinking water or threatening the air that we breathe. And that’s why it’s so important that citizens have the right to bring suits under the Clean Water Act and under the Clean Air Act to hold these big polluters accountable. In fact, our state affiliate in Texas, Environment Texas, just had a case against Exxon for thousands of violations of the Clean Air Act at its huge refinery in Texas there, and at the end of the day, after nearly a decade of litigation, there’s nearly a $20 million penalty for Exxon to pay as a result of its thousands of violations there. But as you point out, that case did not necessarily get all of the media attention that it deserved early on. So it’s very important to take on these big polluters.

Mike Papantonio: Yeah, the media’s more concerned with what Kim Kardashian wore to an award ceremony last night. Look, thank you for being out there. You’re very effective. Your organization is effective. And I can just tell you, without what you do, we would be in a lot worse shape environmentally throughout this country. Thanks for being here.