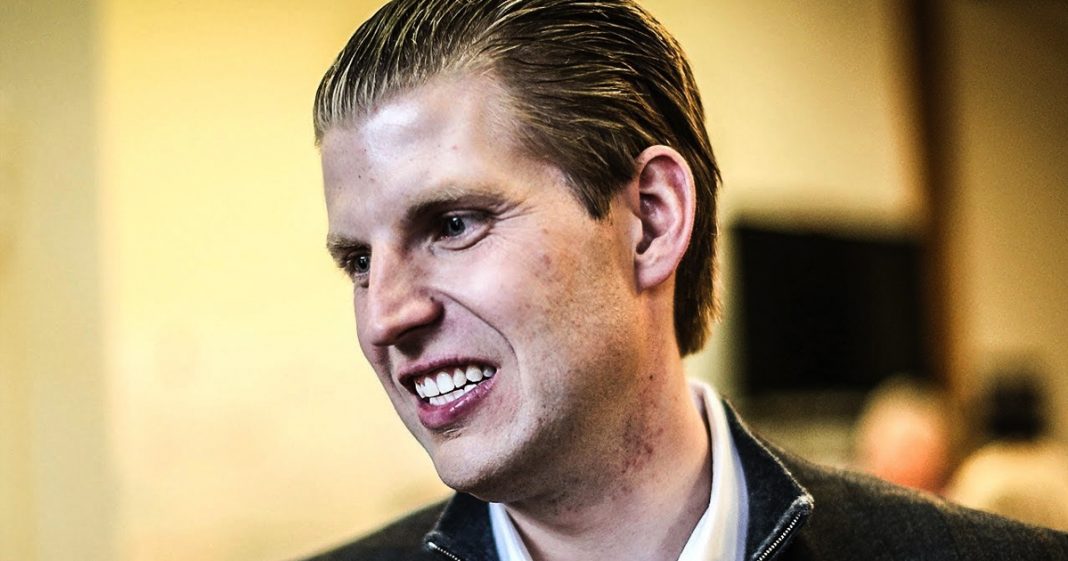 In a bizarre interview this week, Eric Trump suggested that his father intentionally tunes out negative reports about his presidency, otherwise he might kill himself out of depression. Not only is the criticism warranted, but if Trump is that mentally unstable then he should resign immediately. Ring of Fire’s Farron Cousins discusses this.

During a Tuesday radio interview on the Joe Pags Show, Eric Trump hinted that his father may not be as mentally stable as Republicans like to think he is. According to Eric Trump, Donald has to filter out what news he pays attention to, because otherwise he might actually end up committing suicide out of depression. Now, here is Eric Trump’s exact quote, “I think you have to tune it out. You obviously have to be tuned in to it, but at the same time you have to take it all with a grain of salt. If they weren’t talking about you, you wouldn’t be doing something right, and it’s important to keep in context. Otherwise, quite frankly, you’d probably end up killing yourself out of depression, but he’s doing a great job.”

Obviously, Eric Trump is referring to his father and he’s talking about the media’s coverage of Donald Trump. There’s two separate issues to address here. One, if Eric Trump is being truthful, and we can take him to mean that his father could possibly be tuning out negative coverage because he might be suicidal, that is a very important issue that we need to take very seriously. You don’t make accusations like that or inferences like that, implications, you don’t imply that about a sitting president of the United States, without the people of the United States becoming slightly concerned about it. Yes, Eric Trump was talking about his father in that clip. Yes, he was talking about the press coverage of his father that is overwhelmingly negative. Then, he mentions that anyone going through that, anyone, might commit suicide out of depression. These are the kind of accusations from with inside the family itself that we need to take very seriously, because if Trump is not mentally fit enough to serve as president of the United States, then he needs to go.

Furthermore, as I have said countless times, the Trump family needs to stop complaining about the media, and perhaps look at themselves and wonder why everybody always says such mean, nasty, hurtful things about them. It’s not because they’re out to get them, it’s because it’s the truth. When we see Donald Trump’s callous response and complete lack of empathy towards Hurricane Harvey victims, yeah, we’re going to talk about it, and it’s not going to be flattering for the president. When he comes out and defends neo-nazis, yeah, we’re going to be hard on him, and it’s not our fault. Stop blaming the media because your father is not mentally stable enough to understand that the reason the press talks bad about him is because he constantly does bad, heartless, horrible things. It’s not us. It’s him.

You and your family, Eric, need to understand that. More importantly, if you suspect that there is something wrong with your father’s mental capacities and he might possibly consider suicide, you need to report that to the authorities, because that is a very serious issue, something that the country needs to be aware of. If the sitting president is considering something like that, or has joked about it, or talked about it, that’s the first sign that he needs to get serious mental help.