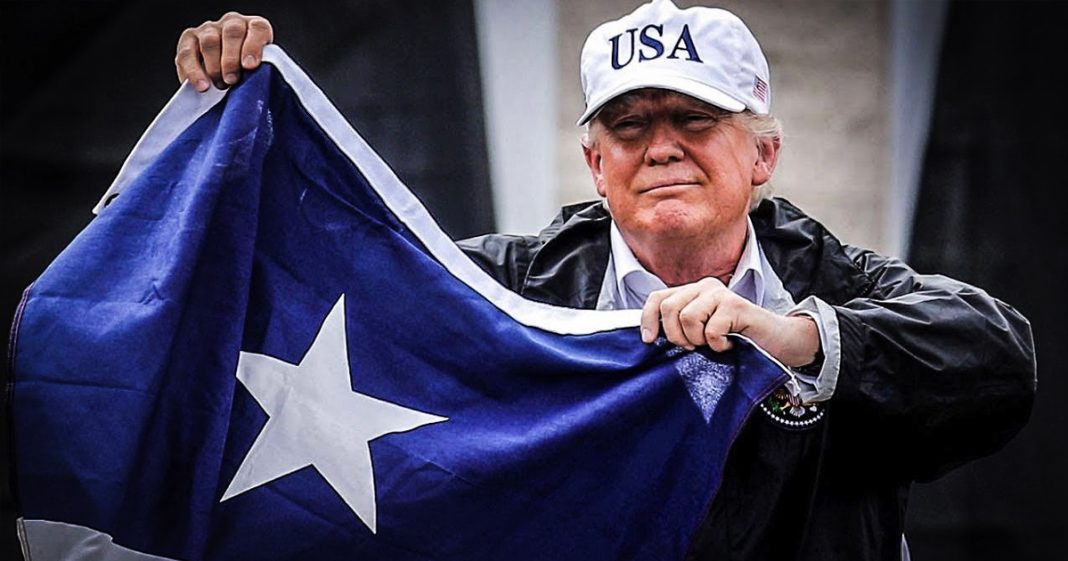 Donald Trump finally made his way to Texas on Tuesday, but instead of touring the areas that are being ravaged by floods, he stayed completely dry, didn’t meet with a single victim, and bragged about the size of the crowd that showed up to hear him speak. This man is not a leader, and his callous response to Hurricane Harvey is just another reason why he shouldn’t be president. Ring of Fire’s Farron Cousins discusses this.

On Tuesday of this week, Donald Trump finally made his way to Texas to survey the damage caused by Hurricane Harvey, or at least that’s what everybody was kind of led to believe would happen. As it turns out, Donald Trump visited an area that was not flooded, where it wasn’t even raining, and didn’t bother to meet with a single victim of this deadly hurricane.

Instead, he gave a speech positioned between two fire trucks, where he praised the crowd size there. That’s right. In the middle of a natural disaster, one of the worst that this country has seen in a very long time, Donald Trump didn’t talk to the victims, didn’t reassure anybody. He made it all about himself and how many people turned out to see him speak about the hurricane.

That is the only thing, unfortunately, that Donald Trump knows how to do. At this point in America, we need a leader. We need somebody who’s going to step up and say, “I understand what you’re going through. This is horrible. We’re going to make it right. I’m going to put every available resource out there to help these people. I’m going to put my horrible legislative agenda on hold and focus on helping the victims here.”

But he didn’t do that. In fact, at one point, he actually talked about how “tough, tough, tough” it is because he’s dealt with water damage in some of his apartments, too, from leaky pipes. You know, because that’s the same as watching your home float down the street in eight feet of flood water.

That’s not how it works, Donald. Having a few leaky pipes in one of your crappy apartment buildings is nothing compared to losing everything that you have worked for for your entire life because of a natural disaster. And you did nothing to help these people. You did nothing to address their concerns. You made it all about you, just like you have with everything else.

His response to Hurricane Harvey is just the latest in a long list of examples as to why Donald Trump is unfit to be the president of the United States.