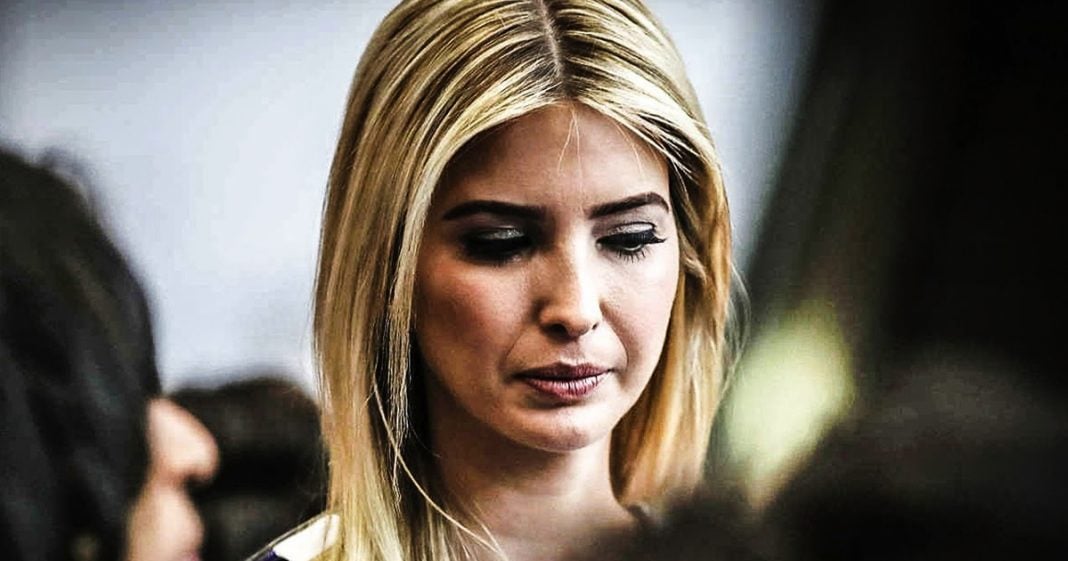 Ivanka Trump has always been a supporter of equal pay for women – at least in public she has been. But behind the press coverage, she’s been working with the Trump administration to repeal an Obama-era rule that would have provided transparency and forced corporations to reveal how they pay men compared to how much they pay women for the same jobs. Ring of Fire’s Farron Cousins discusses this.

One thing that she was very big on at the time, or at least claimed to be and has claimed to be in speeches and public appearances is equal pay. Men should not be making more than women for doing the exact same job with the same amount of experience and all of that. Gender equality in terms of pay was a big thing for Ivanka Trump. At least it was publicly. Because behind closed doors, Ivanka Trump has been working with her father and the administration to repeal an Obama-era rule that was set to go into place this past spring that would have forced corporations to release data on how much they pay the men working for them versus how much they pay the women working for them.

While it’s true it wouldn’t have done necessarily anything to close that gender pay gap, but it would have provided transparency for everybody in this country to see how sexist corporations can truly be. And Ivanka Trump, for some reason, after being a gender pay equality warrior says that this is a bad idea. Do you know why she thinks it’s a bad idea? Well, first of all, she says it’s not gonna do anything to solve the problem. Well, yes it is. Exposing a problem may not immediately solve it, but it’s gonna bring public attention to it in a way that it hasn’t received in the past and therefore inspire change down the line. That’s how things usually work in this country.

But furthermore, Ivanka just like the rest of the members of the Trump administration say that enforcing this on corporations is gonna be too burdensome for the corporations themselves. That’s right. Those poor pitiful corporations raking in billions of dollars a year. We don’t want them to have to do a little bit of extra paperwork so we can see how their screwing over their own workers.

There really is no downside to this whatsoever other than exposing the disgusting behavior of corporations who favor men over women for doing the exact same job. But for some reason for Ivanka Trump and Donald Trump and the rest of this administration, that’s a bad idea. And I’m willing to bet that they think it’s a bad idea because it’s something that Barack Obama thought was a good idea.