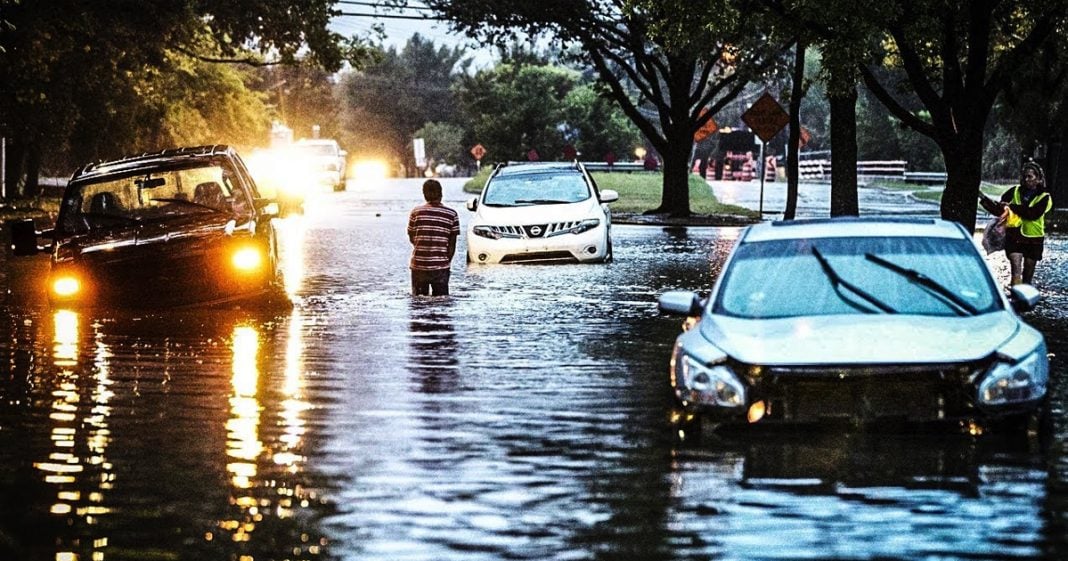 As soon as Hurricane Harvey made landfall in Texas, corporations saw an opportunity to make even more money. Stores like Best Buy jacked up the prices of things like cases of bottled water, in some instances charging more than $40 for 24 bottles of water – an item that would usually cost about $5.99. This is disgusting behavior, but it is exactly what we’d expect from corporate America. Ring of Fire’s Farron Cousins discusses this.

In case you thought that the behavior of corporations in the United States could not get any dirtier, take a look at what’s happening to stores all around the areas affected by Hurricane Harvey. They’re have been reports and pictures floating around the internet of stores like Best Buy jacking up the prices of a case of bottled water, 24 bottles of water up from about 5.99 per pack to as much as $40.00 per pack of bottled water, and according to a report on Common Dreams, some stores have even raised the prices up to $99 for 24 bottles of water.

They’re doing this, because people need these things, and yes, they are in limited supply, but price gouging people who just lost everything, who have no water to drink, no food to eat, no clothes to wear, that is one of the most disgusting behaviors that we have seen from corporations in a very long time here in the United States, and to top it all off, that’s illegal. However, there have been libertarians making the rounds on the media, talking about this story, saying that this is a good thing, this is how and supply and demand works in the United States. Well, to an extent, but when we’re dealing with a disaster area, again, with people who’ve lost everything, this is disgusting behavior.

Stores should be giving out those waters for free. They should be concentrating on saving peoples lives, instead of making a profit off of death and destruction, which is exactly what they’re doing here. Best Buy had to come out and publicly apologize for doing this, but we still have no indication as to whether or not they’re actually going to stop doing this. As for the other companies, they’ve remained silent. The only silver lining to all of this, is the fact that this story originated from social media, from average American citizens who saw this happening, posted the pictures online and forced the media to take up the issue. And how did the media respond? They responded by talking about looters. People out there stealing food from stores. You know, those same people who lost everything and who may not have $100 to go spend on a case of bottled water for their family.

I don’t want to hear anything else about the looters at this point. I don’t care about that. These people, again, lost everything, and corporations are trying to screw them over, so if they go and take a loaf of bread or a case of water, or food for their family, food for them to survive, I don’t think that’s such a bad thing, I don’t think it’s a bad thing that we let people live in this country, when they’ve lost everything. That is what a moral country is supposed to do. We’re supposed to reach out and help people in a time of need, not try to get a couple extra dollars out of them for a case of bottled water, because they don’t have tap water. The only water they have access to is the water that filled up their home. That is disgusting behavior and it has to stop, and corporations are the ones doing this.

We need to list all of these corporations, we need to find out who they are, what they’re doing and then make a pledge that we will not go back to these stores because of their behavior. Until we do something like that, until there is massive public backlash, which is growing at this point, these stores will never learn their lessons and they’ll be right there at the next natural disaster, waiting to jack up those prices once again.