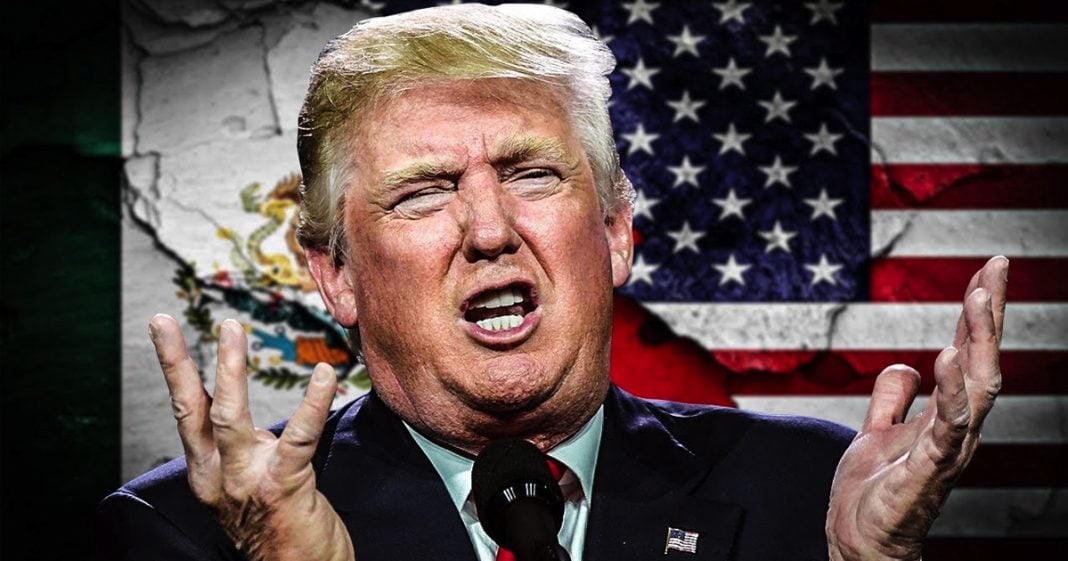 The Mexican government has offered to help with both the rescue efforts and humanitarian crisis created by Hurricane Harvey, but President Donald Trump hasn’t said whether or not he’ll accept their help. Trump has, however, reiterated that Mexico will pay for the border wall, but the government of Mexico is adamant that they will do no such thing. Trump is demonizing a country that wants to help us, so who’s the real villain here? Ring of Fire’s Farron Cousins discusses this.

As large areas in the state of Texas are still being inundated with floods and heavy rains, dozens of inches of rain are still predicted in the forecast for the remainder of this week for those particular areas. We can only expect the flooding at this point to get worse.

Countless people around the United States have made their way down to Texas, they’ve been taking their boats doing whatever they can to help people out, sending supplies, donating to the Red Cross. The country of Mexico has offered aid to the United States to help with these efforts both with the rescue efforts and with the rebuilding and mitigation programs.

However, Donald Trump the White House this administration has not yet decided if they’re going to accept that help from the government of Mexico. Now, keep in mind during Hurricane Katrina, the country of Mexico sent over members of their military to help rescue people and to help rebuild and deliver supplies.

Mexico was right there for us during that catastrophe and they’re offering the same kind of aid following Hurricane Harvey, and Donald Trump who is so bitter about his border wall can’t decide whether or not he wants to accept their aid. As of right now, and this number continues to go up as floodwaters continue to push forward, at least nine people have died in this catastrophe.

As many as 350,000 people will be displaced because of this floodwater as it stands right now, the further it goes the more people that will be displaced, some of them permanently. There are many areas that will not be able to rebuild. This is going to cost billions of dollars and it’s already projected to be the costliest natural disaster in U.S. history.

Why on earth would Donald Trump not want to accept any form of aid that any country is offering to the United States at this point? Well there’s a simple reason, because at the same time Mexico is telling us they want to send aid. They’re also reminding the United States that under no circumstances will they ever pay for a border wall. Donald Trump needs to stop talking about that, because during the storm Saturday, Sunday that’s actually what Donald Trump was tweeting about, getting Mexico to pay for that wall one way or another, either by paying us back or some other asinine way that Donald Trump can imagine.

It’s not going to happen. They don’t want the wall. You do. You should be the one paying for it and not with taxpayer money if you’re so rich, why don’t you go ahead and start construction yourself out of your own pocket since you seem to be taking taxpayers’ money to spend at your own golf resorts anyway.

We’ve already paid enough for your bull crap. I think you can foot the bill on this one if you truly wanted it. The bottom line is this, America is facing a natural disaster right now the likes of which we have not seen in modern history. Donald Trump is bitching about a border wall, Mexico’s offering to help us, so I ask you this. Who’s the real bad guy in this situation?

Is it those pesky Mexicans that Donald Trump wants to keep out of our country? Or is it the guy who’s refusing aid from a country that’s trying to help us as American citizens drowned?