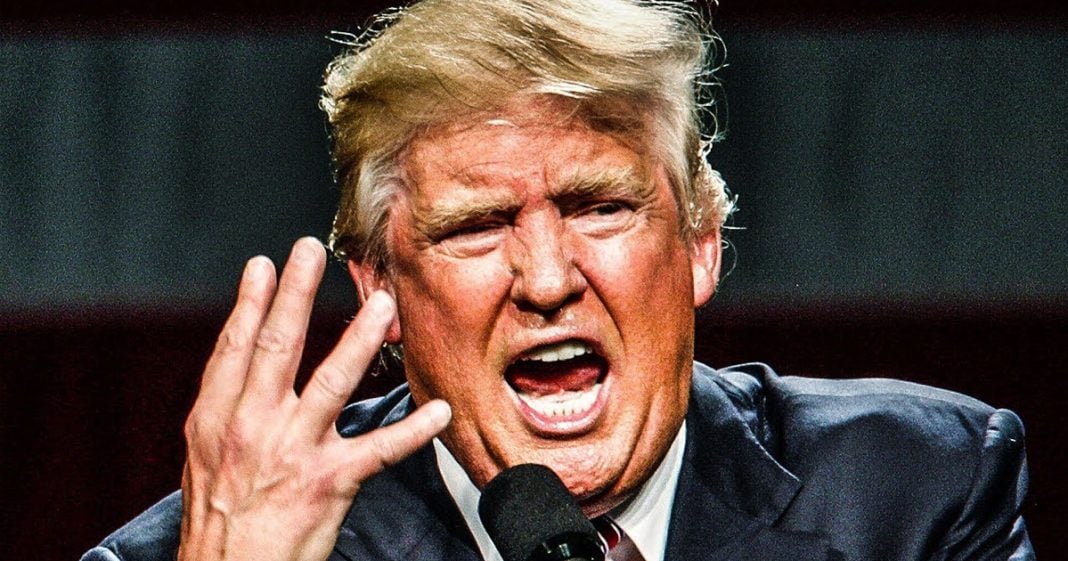 Donald Trump reportedly fired an event coordinator in charge of setting up his rally last week in Phoenix because not enough people showed up to the rally. Keep in mind that Trump actually opened the rally by talking about how large the crowd was, only for photographs to show that the room was a little more than half full. Ring of Fire’s Farron Cousins discusses this.

As we all know, last week Donald Trump held a, I guess you’d call it a campaign rally in Phoenix, Arizona. He opened that rally by saying what a huge crowd it is. He spent three full minutes complementing the size of that crowd. Immediately following the event, pictures started going around on conservative media showing these huge, huge crowds of people lined up outside this arena waiting to go in and see Donald Trump.

Well, as it turns out, those pictures were actually fabricated and they were pictures of people trying to get into a sporting event, not trying to get into the Donald Trump rally. Furthermore, pictures also surfaced showing us that that arena that Trump was speaking in was maybe a little more than half full. Donald Trump didn’t want to admit that. He even said that the media’s going to say that there weren’t many people here, which the photographs proved. That’s all what happened in the public eye.

According to new reports, what happened behind the scenes after the rally was that Donald Trump actually fired the event coordinator who planned this Phoenix rally and set up the arena and everything, because the room was not full enough. He may not come out and publicly admit that his crowd wasn’t as big as he wanted, but obviously behind the scenes Donald Trump was furious about the fact that there weren’t enough people willing to come into this rally and see him speak. We also know that during his 72 minute diatribe, many people ended up leaving because they were tired. They were tired of hearing the same thing from Donald Trump, and they just flat out didn’t feel like being there anymore.

Donald Trump is not drawing the massive crowds that he says he is. We’ve literally as a country already spent millions of dollars this year at Trump’s request just to prove that. When he said his inaugural crowd was bigger than Obama’s, and then launched an investigation into the department that took the photographs to see if they were somehow doctored to take people out of the picture. We spent millions of dollars on this to feed this man’s ego, only to find out all along that the media was right and Trump was wrong. Is that same thing going to happen here with this Phoenix rally? Obviously not, because Donald Trump knows that the room wasn’t full, otherwise he wouldn’t have fired the person who planned the event.

Here’s the bottom line. Donald Trump is a guy who only cares about things like crowd size, number of supporters, the amount of applause he gets, the TV ratings he gets. Keep in mind too, he also mentioned that the reason he pardoned Joe Arpaio on Friday night during the hurricane was because he thought he’d get high ratings for it, because everybody would be glued to their TVs. That’s all this man cares about. He doesn’t care about writing policy to help American citizens. He doesn’t care about keeping us out of wars or keeping this country safe. He cares about being famous and having ratings and having money. If that’s the case, he could easily resign, go launch a brand new reality show series, probably get millions of viewers every week to feed his ego, but leave politics to the people who actually understand what it means to be a leader in the United States. That clearly isn’t Donald Trump.