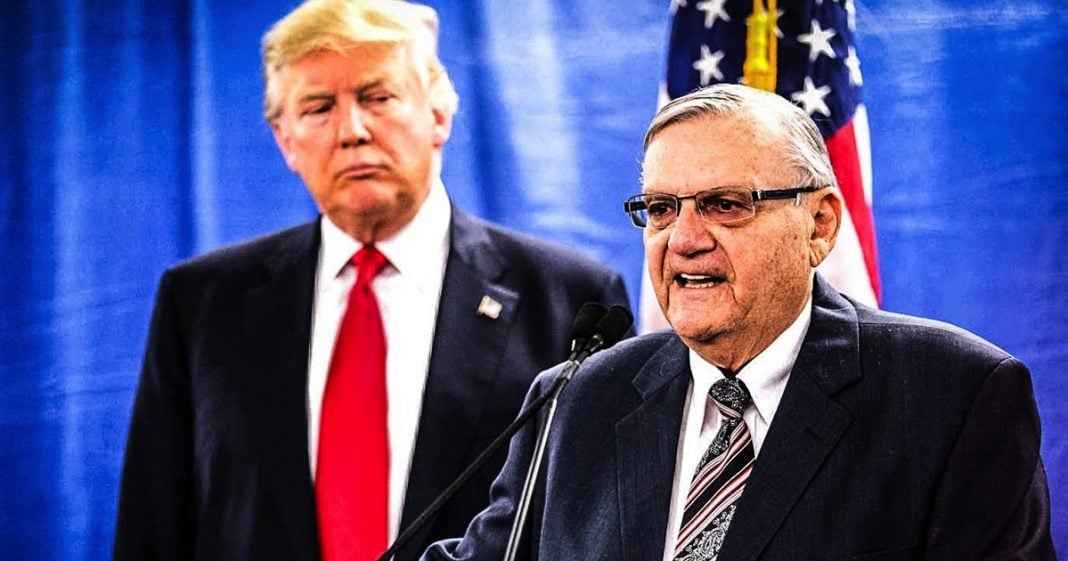 This past weekend, under the cover of Hurricane Harvey, Donald Trump issued a full pardon of Arizona Sheriff Joe Arpaio, a man who had been found guilty of violating the 4th Amendment of the Constitution by specifically targeting Latinos during his career in law enforcement. Trump has officially embraced hate and bigotry with this pardon, and we have to demand that he be removed from office. Ring of Fire’s Farron Cousins discusses this.

Under the cover of hurricane Harvey making landfall late Friday evening, Donald Trump decided that this was his best opportunity to go ahead and issue a full pardon to Arizona Sheriff Joe Arpaio, who had been convicted for violating the Fourth Amendment, by specifically targeting Latinos during his service as a law enforcement officer and as a sheriff.

The court found that Joe Arpaio had no respect whatsoever for the Constitution, and blatantly violated it. He had not yet been sentenced for his crime. But, nonetheless, Donald Trump saw a media opportunity, when the media was focused on hurricane Harvey, and decided to pardon this horrible human being from the state of Arizona.

Well, obviously it didn’t go quite as planned, because the media still spent a good amount of time this past weekend talking about this horrible decision by Donald Trump. There are several things that need to be pointed out about what Trump did that stand out as incredibly odd.

First and foremost, Donald Trump did not go through the normal pardon procedure in order to issue this pardon. Typically, these go through the Justice Department. The President confers with the justice department. Then, make the determination on when and how and where and if they should do it.

Donald Trump decided to act unilaterally on this, and pardoned Arpaio himself.

Furthermore, Donald Trump absolutely does have the authority to do that. I’ve seen some people say that he can’t do that. Well, unfortunately, yes he can. It’s in the constitution.

He has shown that he has no respect for the Constitution. So, maybe we need to not respect it and get rid of the presidential pardoning power, or at least send it through some kind of a review process so that jerks like Trump can’t pardon jerks like Arpaio.

Race relations right now in the United States are in a very, very bad spot because of Donald Trump; because of his normalization of the alt right, and of white supremacists, and of people of that caliber.

Furthermore, it also issued a warning to special prosecutor Bob Muller, and basically said, “Whoever you prosecute of my team, I’m going to pardon them, and there’s nothing you can do about it.”

That is why, of the special investigation going on of the persons of interest, the main one, the first one that Muller needs to take down is Donald Trump himself. He cannot be trusted to lead.

He is abusing his power left and right. He is pardoning white supremacists and people who have no respect for the Constitution.

This man, Donald Trump, is unfit to lead this country.