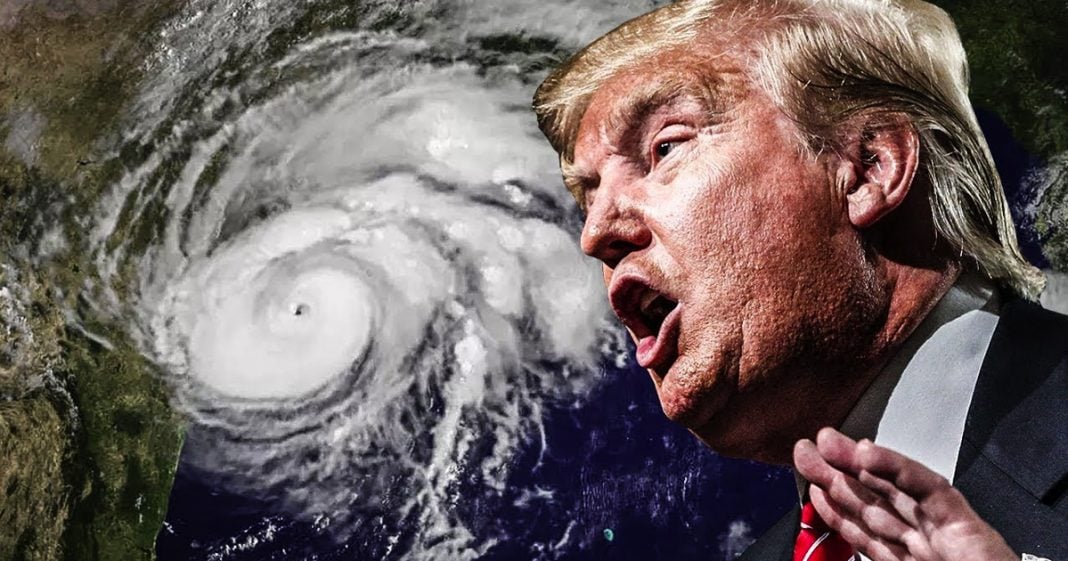 Texas is currently experiencing what experts are calling a “thousand year flood” as a result of Hurricane Harvey. And as residents saw their livelihood being swept away by flood waters, Donald Trump was tweeting out a book recommendation, bragging about how much he won the state of Missouri by in 2016, and he promised that Mexico will pay for the border wall. He had a chance to be a leader this weekend, and he failed miserably. Ring of Fire’s Farron Cousins discusses this.

This past weekend, Hurricane Harvey ravaged through Galveston, has made its way to Houston as a tropical storm, where it is currently just sitting mainly around the area. Various other cities throughout Texas also experienced widespread devastation. Currently, the areas affected by this storm are in what experts are calling a thousand-year flood, meaning this kind of weather event only happens about once every thousand years.

Scientists have warned us that it is very obvious that climate change affected the strength and severity of this storm. That’s what also obviously led to a lot of widespread devastation. FEMA’s estimating as many as half a million people might be seeking relief through FEMA. We still have people in rising flood waters begging to be rescued, and what has Donald Trump been doing throughout all of this? He’s been tweeting.

Over the weekend, as people were struggling to get out of their homes, in which the water was rising to deadly levels, Donald Trump tweeted out a book recommendation by Sheriff David Clark, an avid Trump supporter and somebody who’s been known to grossly abuse the human rights of prisoners within his jail. Donald Trump tweeted out a book recommendation by that guy. He also, for some reason, decided to brag about his electoral victory in Missouri in the 2016 election because as he talked about hey I’ll be going to Texas later this week, I’m also going to Missouri, which I won by huge margins, and then he started going on about Democrats and whatnot. And, he also tweeted about Canada and Mexico not being very enthusiastic about the renegotiation of NAFTA, and he tweeted out to reassure us that once and for all, that Mexico one way or another is damn sure going to pay for that border wall.

In between those tweets, granted, he tweeted out things about the storm. He tweeted out about the historic rainfall. Wow, he said. Wow, with an exclamation point, as if he’s bragging about being president during historic amounts of rainfall. Now keep in mind, the people in Texas right now are expected to receive an additional 50 inches of rain in the next week. It’s supposed to continue on until at least Friday. Begging for help and Donald Trump tweets “Wow! Historic rainfall.”

This man has been given every opportunity to act like a leader, every single possible opportunity to come out, reverse course, and say you know what, people need me, I’m going to put my goddamn phone down, and I’m going to act like a human being and go help these people. Do you know what Barack Obama did during Hurricane Harvey this weekend? He tweeted out donation links for the Red Cross. He tweeted out links for people to go volunteer. He thanked the first responders. It wasn’t until Obama thanked the first responders out there, risking their lives to save other people, that Donald Trump decided to tweet out something similar. He couldn’t even take the lead on thanking people for helping out. People from all over the country are driving down to Texas right now with their boats in tow to go help with the rescue efforts because we don’t have enough people to go out there who are employed by the government to save lives.

Donald Trump failed miserably in this test of leadership, just like he has every other time since he has been president. He is unfit to lead. He is too callous to lead, and he has absolutely no empathy for these people. Right now, he’s scheduled to go there on Tuesday, but officials in the White House are already saying that might not actually happen yet. He may not go to the storm affected areas when he does finally go to Texas. What does that tell you about this man? Does it tell you that he’s a strong leader? Does it tell you that he’s somebody that cares? Or does it tell you that he’s just an egotistical maniac who’s somehow dumbed his way into the office of the presidency and he doesn’t deserve to hold that position? I’m going to go with the latter on that one.