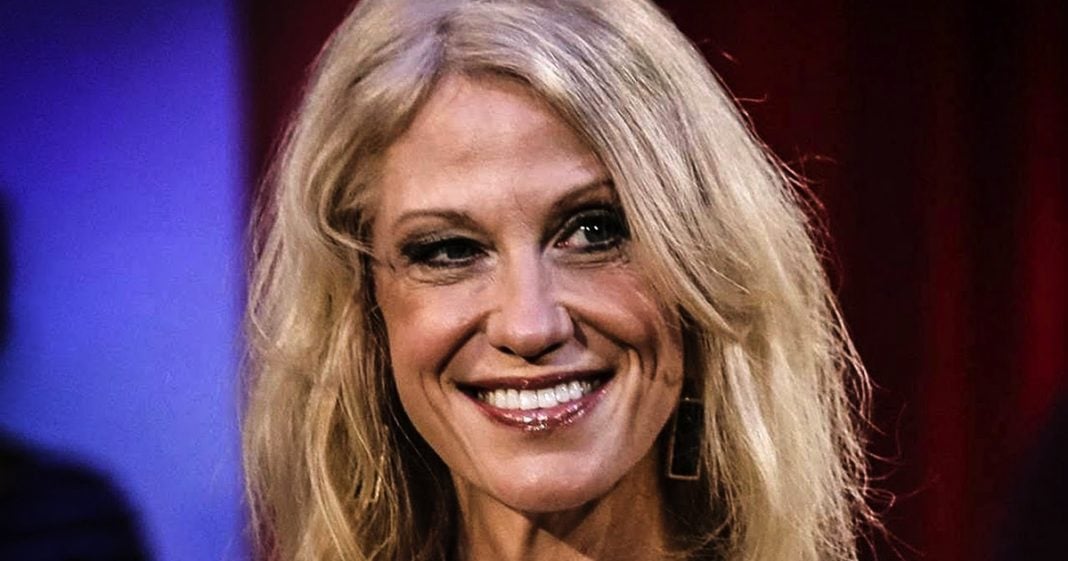 During an appearance on Fox & Friends late last week, White House counselor Kellyanne Conway lamented the fact that the media isn’t “forced” to report good things about Donald Trump. Maybe they should stop blaming the media and start looking at why they haven’t done a single decent thing for this country since taking office. Ring of Fire’s Farron Cousins discusses this.

Officials within the Trump White House are still furious about the fact that the media is actually reporting the truth about what Donald Trump is actually doing as president of the United States. Obviously, any time the president is in trouble, Kellyanne Conway comes trotting out. She goes to Fox News this past Friday and she laments the fact that the media is not forced to cover the president in a positive way. Take a look at the clip.

Steve Doocy: A couple nights ago on television, he said he wondered whether or not the president was fit to be president, fit to serve. If James Clapper is watching right now, what’s your message to him?

Kellyanne Conway: It’s such an absurd analysis, playing armchair psychiatrist. It’s not just him. It’s a lot of people on TV. I remember … I’m old enough to remember when news stations reported the news and didn’t just have a parade of pundits going out there and opinionating and rendering their opinions, pontificating and conjecturing. I think it leads to analysis like this because people end up with very little to say. They’re not compelled. They’re not forced. Nobody demands that they actually report facts-

Brian Kilmeade: Is this over the line? Kellyanne?

Brian Kilmeade: Is this over the line? This is the Director of National Intelligence.

Kellyanne Conway: Yes, of course, it’s way over the line. It’s way over the line. The media and other opinion leaders, they were way too afraid of President Obama and his administration. They’re not afraid enough here, meaning they say, “Well, this is just our job to report the facts and hold people accountable.” That’s not what that is. I won’t repeat what they’re saying because it gives it oxygen.

I have an idea for Kellyanne Conway and really anyone within the Trump administration. Instead of being angry at the media for not covering Trump positively, how about you look at your guy, Donald, and wonder why he’s not doing anything positive for the media to talk about? Fox News is the only media outlet that covers Donald Trump positively with the exception, of course, of Washington Post and New York Times whenever Donald Trump decides to bomb somebody because the media loves a good war.

When it comes to what the other outlets are reporting, they’re not saying anything that’s not true. They’re not out there saying Donald Trump is just a horrible human being and that’s the end of the story. They’re adding some context. They’re letting us know why they think that and they’re backing it up with facts and figures and statistics. Now, admittedly, MSNBC does spend a hell of a lot of time talking about the Russia thing rather than reporting on some of the real horrible things that the president’s actually doing at the moment.

Right now, since Donald Trump can’t stop talking about Russia himself, they’re talking about it as well. For Kellyanne Conway to come out and say that it’s sad that the media is not forced to cover the president positively, and then say that they were never this hard on Obama, I don’t know if you know this, Kellyanne, because you’re not very bright, but you were actually talking to a couch full of human beings who spread the lie and hosted guests who spread the lie that Barack Obama wasn’t even born in the United States, or that he was somehow a secret Muslim. People on that couch who criticized his every move every single day for absolutely no reason whatsoever.

Don’t you dare get out there and say that they were never this bad to Obama because you’re talking to the people who were the worst to him, who spread lies about him far worse than anything anyone has done about Donald Trump. The media does not have an obligation to be nice to anyone. The media has an obligation to the American public to tell the truth. I’m sorry that that truth doesn’t fit into your little world view where Donald Trump is king and he can do no wrong. Because here in the real world, all we’re seeing coming out of the White House is mistake after mistake after mistake.