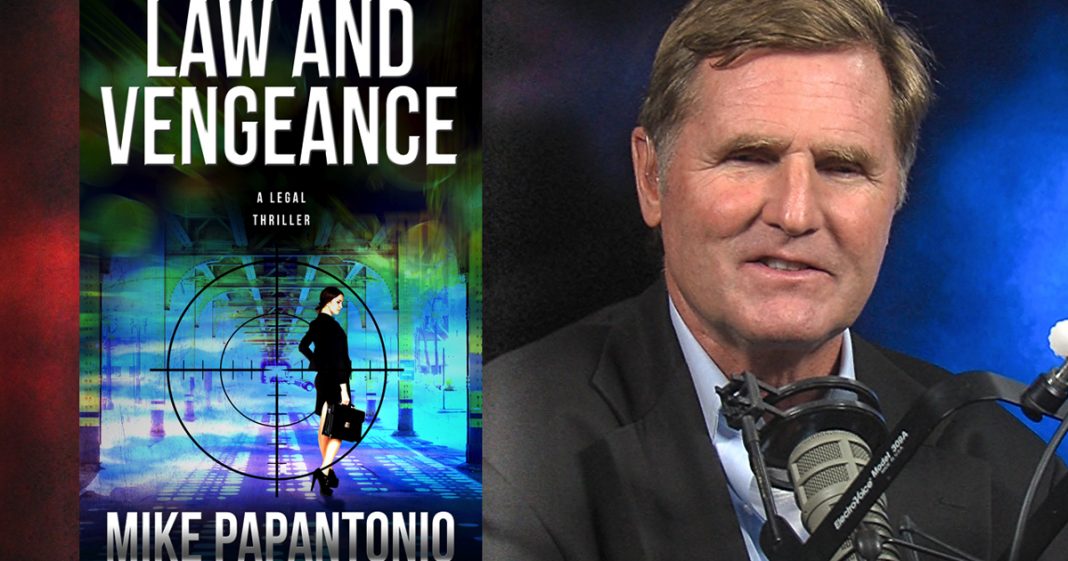 Ring of Fire’s Sam Seder and America’s Lawyer, Mike Papantonio, discuss Pap’s upcoming legal thriller, ‘Law and Vengeance,” and how it highlights real problems in our justice system when it comes to criminals in Armani suits.

Order your copy of “Law and Vengeance” here: LawAndVengeanceBook.com

Sam Seder: So, Pap, as I was saying before we got on air, I am very excited. I am headed on vacation. In fact, tomorrow morning it starts. I’m going to the beach, and I gotta say, I want to talk to you about Abilify. I also want to talk about what’s going on with the theories behind holding opioid manufacturers accountable, but I gotta say, I am sitting here with a copy. It is an edit proof only because it’s not out yet, but I have my Law and Vengeance copy, your second book. A legal thriller that I am going to be bringing to the beach, and I am psyched to read it. I’d love to talk to you just a little bit about themes because I’ve interviewed people who talk about these themes that take place in real life. The failure of our government to prosecute white collar criminals, and then simultaneously the problem of our government pursuing whistleblowers, particularly under the Obama administration, in a way that we haven’t really ever seen in this country. These are themes that you bring into Law and Vengeance.

Mike Papantonio: Yeah, I mean the whole idea of the book is … When I started doing this series of books … This is number two in a series of four books. The third one is about the opioid crisis, and the fourth one is about banks washing money for terrorists. And they all, by the way, are centered around actual cases that I handle and our law firm handles.

But this one centers around a true case. It was a manufacturer that made a gun sight both for pistols and rifles that unfortunately was a disaster. It was defective. They knew it was defective. The gun sight would work in perfect conditions, but if you put it out in the heat, humidity and heat would cause it to be off several degrees every hundred yards, and it cost a lot of lives because of it. That’s a case we handled, and it builds around the same characters that came out in the first book, Law and Disorder. They just are onto a different case now, and the severity and the threat and the danger is really turned up in this because it involves a police union who is mandating the use of these, and in the process of getting kickbacks. And it involves one of the biggest weapons manufacturers in the world.

So, Nick Deketomis and the characters in that book are under pretty heavy pressure. Gina Romano is they key trial lawyer in that. She’s an experienced white collar criminal defense lawyer, so she’s been thrown in the middle of this case because a couple of her partners were killed.

I think it’s a story you’re going to like, Sam. Hopefully you’ll read it. The goal of all these books is be able to read it and then come away after you read it being entertained, but also learning something.

For example, you mentioned the Department of Justice and what a miserable job they’ve done actually going after … For, A, taking care of whistleblowers, and, B, really throwing anybody in jail. It’s one thing to fine a multi billion dollar corporation … Fine them $500 million. They made that in a month. These are multi, multi billion corporations, and the Department of Justice has evolved into this thing where you don’t go to jail unless you’re wearing a hoodie. If you’re wearing an Armani suit, if you’re driving around in a Bentley and have a Rolex watch on, you don’t go to prison. You simply pay a fine for your fraud, for your crime, that results in the death of human beings. But if you’re wearing a hoodie and you’re out on the street selling a couple ounces of marijuana, baby, you better hold on because you’re going to prison.

Sam Seder: Right. If you play your cards right, maybe they make you Treasury Secretary instead of prosecuting you for running a foreclosure mill.

Sam Seder: Let me ask you this, and then I want to talk about Abilify, but is there a certain amount of liberation for you because I know there’s a lot of cases that you have. I’ve spoken to, obviously, a lot of attorneys. We go to the Mass Torts Conference twice a year, and I speak to a lot of attorneys about a lot of these different cases. And sometimes when they settle, or sometimes they’ve seen things that are sealed that they’ve seen in discovery, is this liberating for you to be able to talk about things? Obviously you can’t tell the exact facts, but you can talk about dynamics. That must be … Probably, I would image … You tell me … Dying to articulate to the public.

Mike Papantonio: Yeah, it is. That is an excellent point, Sam. It’s not just when you try a case and get a remarkable result. Even though the bad guys don’t go to prison, you’re able to tell the story, the public. If corporate media actually takes time to cover the stories, which they so infrequently do. They give it two or three paragraphs. It’s usually not enough.

But, yeah, it is liberating because these books allow me to talk about the intricacies, for example, of the Department of Justice that people come away with the Obama administration, for example, thinking, ‘Oh, Eric Holder was great,’ or ‘Loretta Lynch, she was really one of us.’ Well, no, they weren’t. They were just the opposite. They have nothing in common with you. They have nothing in common with the typical American. Eric Holder comes from Covington Burling, for example. He ran the Department of Justice, and he always sided with white collar criminals, both when he was in private practice, and he’s back with the same firm, by the way, now defending white collar criminals again.

But when he was Department of Justice, it was so dysfunctional because he would be in front of the camera and everybody says, ‘Oh, wow. Eric Holder fined the company $250 million. Wow, that’s spectacular.’ Well, no, often was times where companies actually made products that killed people. They made a pharmaceutical that poisoned a liver or a kidney or a heart, and people died.

Or Wall Street that stole money from Mom and Pop pension programs, and Eric Holder would say, ‘Well, we really hit JP Morgan, baby.’ Well, no. People lost everything. They lost their entire life savings. They committed suicide. They became ill to the point to where their lives never recovered.

So we think, ‘Oh, yeah. He was really one of us.’ No, he wasn’t. And neither was Loretta Lynch. And Obama knew exactly what was going on because those were the people that really supported him.

Yeah, it is liberating to tell these stories in the book because you’ll take a progressive that may read the book and all of a sudden they’re going, ‘Wow. I didn’t know all that.’ Well, it’s the truth, and so I think all these books that I’m writing right now … You mentioned Abilify. That’s a story that you almost can’t believe. It’s a story where the company … It’s a case that’s pending right now where the company, the documents say we whitewashed the clinical data. We whitewashed the story, and the story is that the drug is so powerful that affects the impulse center of the brain, and we have cases where people that have never gambled in their life all of a sudden show up on an Indian reservation gambling, and have literally gambled everything they own away, including their house and their car. Those are not uncommon kinds of cases.

That was Bristol Meyers Squibb that handled that case. But that type of conduct from corporate America is not an exception anymore. It’s the norm, so it’s fun to write those books because of that.