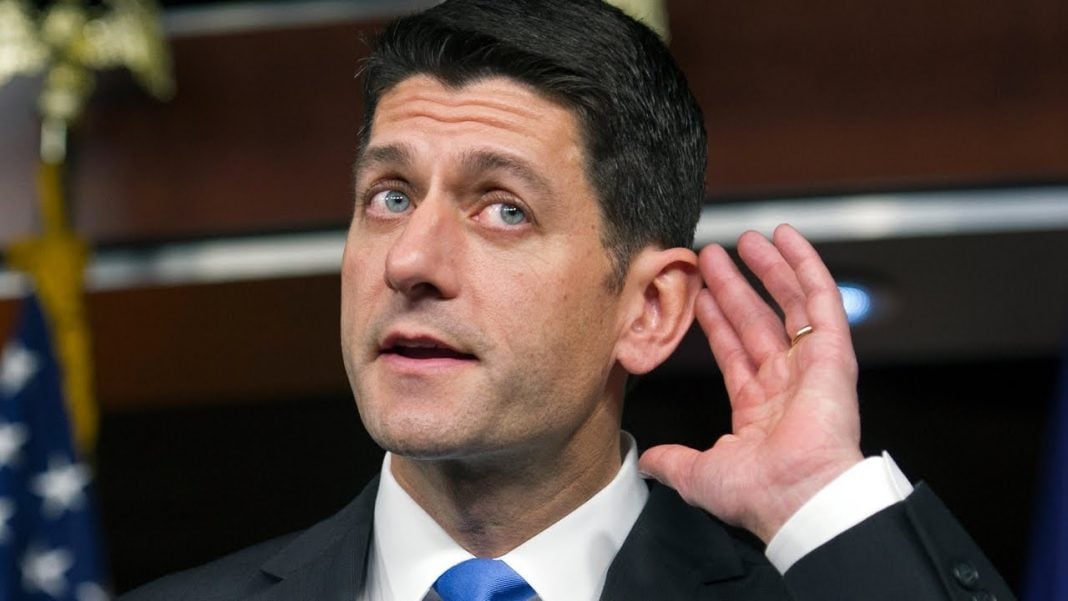 During a recent interview, House Speaker Paul Ryan very meekly admitted that he would like to see Donald Trump using Twitter less, but that he also understands why the President believes it is important. In the past, Trump has used Twitter to slam Paul Ryan, but Ryan is playing the long game – he knows that Twitter will be Trump’s downfall and that will give him the chance to rise to the top of the GOP. Ring of Fire’s Farron Cousins discusses this.

This past Monday evening, Paul Ryan gave a town hall meeting, one of the very few Republicans to actually go into a town hall. He had been pressured for many, many weeks to do a town hall while he was on his break, so he decided, “Look. I’m going to do a town hall. I’m going to come be a savior of the Republican party.” Didn’t actually turn out that way. In fact, when asked a question about Donald Trump’s tweeting habits, Paul Ryan very meekly, very humbly said, “Well, yeah. I mean, do I wish he would tweet less? Yeah. But I do understand that is his way of getting his unfiltered message out to the public and it’s very effective. Do I like everything he tweets? No.”

What’s more interesting, when you dig through it and you start putting on those political scientist hats and look at reasons, here is why I think Paul Ryan is being so wishy washy on this. Paul Ryan understands that Republicans in Washington D.C. are not willing to admit or commit, I should say, to Donald Trump being the party’s 2020 nominee. If Donald Trump gets taken down by this Bob Mueller special prosecutor investigation, and that would give us President Pence, I doubt Pence would withstand a 2020 election, and therefore Republicans would be more apt to primary him.

Paul Ryan wants to be that guy. Paul Ryan as the failed Vice Presidential candidate of Mitt Romney back in 2012, was seen as more immature, somebody who wasn’t a leader. He was a tea party fringe extremist, which he still is, he’s just trying to hide it better, but he thinks he’s polished himself up enough that he can speak to people. He’s been on Twitter the last few days talking about how bad Donald Trump’s speech was in Charlottesville.

Paul Ryan is gearing up for something bigger. Trust me on this. He won’t take a stand against Trump because he doesn’t want Trump to stop tweeting. He’s seen how many times Donald Trump has tweeted out things that could be very intriguing to the special prosecutor. He doesn’t want that to stop. He knows that to further his own political career he needs something to happen to Donald Trump, namely impeachment.

If he, as the leader of the House of Representatives, were to be the one to go ahead and start those impeachment hearings once the special prosecutor’s investigation is done, he could suddenly emerge as the hero of the United States who got rid of Donald Trump once and for all. The savior of the Republican party. He’d be a hero, and he’d be very difficult to beat in a 2020 election. Paul Ryan understands that, and I guarantee you that is the long game that Paul Ryan is playing here. If the Democrats don’t get their act together, 2020 could be the year that Paul Ryan becomes our next president.