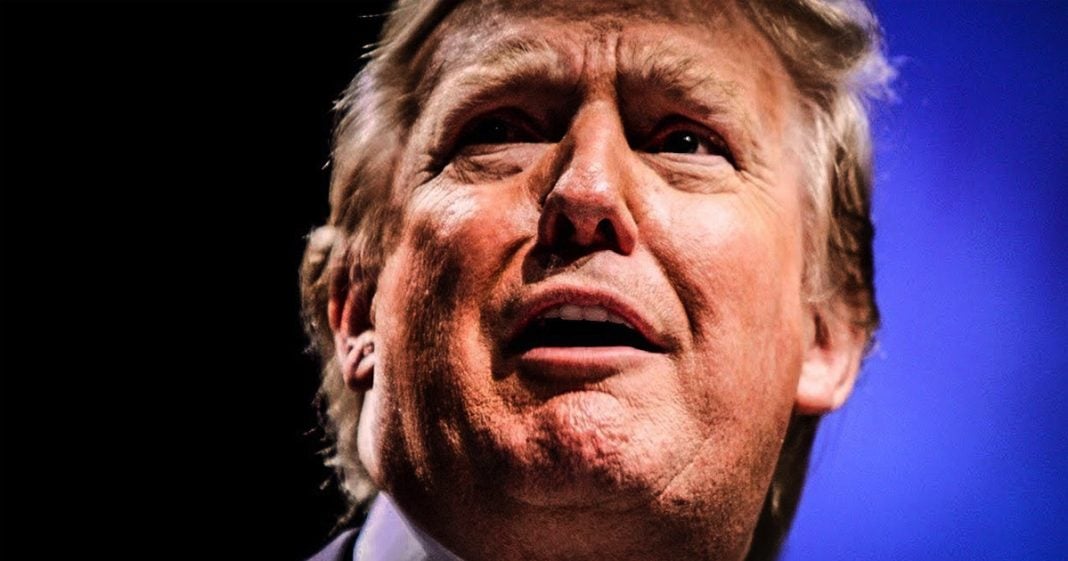 Donald Trump is already laying the groundwork to blame everyone but himself if the upcoming budget talks fail. This has become the hallmark of the Trump administration – blame everyone else for the bad stuff, but take credit for good things that you had nothing to do with. This is part of his narcissistic personality disorder. Ring of Fire’s Farron Cousins discusses this.

Donald Trump has been basically in a tirade on Twitter, pretty much since he became President of the United States, but specifically in the last week or two, going after Republicans in the House and the Senate and preemptively blaming them for things that have not yet happened or things that actually didn’t even happen.

For example, one of the tirades he went on and has been going on even this morning, was about the need to get rid of the filibuster in the Senate, because it’s allowing eight Democrats, as the President says, to control everything that comes out of that Senate, and it’s because of the filibuster that the Senate was unable to pass their version of Trumpcare.

As it turns out, that’s not true. The Senate tried to do it under reconciliation, which requires a simple majority vote, and they still weren’t able to get majority vote. Trump doesn’t understand parliamentary procedure, so he assumes it’s the filibuster, or maybe he just needed a reason to go out there and attack Democrats and Republicans.

The more interesting part of the story is the preemptive blame that Donald Trump is trying to lay at the feet of Republicans in the House of Representatives because he doesn’t think they’re going to be able to pass legislation to increase the debt ceiling, which would then mean that the budget wouldn’t pass, which would mean we were likely heading for a government shutdown.

Trump himself has actually already threatened to shut down the federal government if we do not give him the funding he wants for his border wall, so I don’t know why he would think that the public would believe him when he already says that a government shutdown would be the fault of the Republicans, because he’s the one who said he wants to do it.

Here’s the thing about Donald Trump, and this is something I think everybody mostly understands but, if you don’t, pay attention now. Donald Trump blames everyone else for anything bad that happens in his life, during his presidency or whatever. It is always the fault of someone else. Conversely, Donald Trump always takes credit for the good things that other people do that he wasn’t even involved in.

Case in point, the economy. We’re still adding jobs each month. Donald Trump, though he says he’s doing that, clearly doesn’t want the public to know that up until about mid-September, we’re still operating under the last budget put in place by President Barack Obama. This is still Obama’s economy until September, and then Trump takes over. That’s how it works.

See, the good things are always him. The bad things are always someone else, and that is one of the hallmark traits of Donald Trump’s mental illness, which is known as narcissistic personality disorder. Look in the DSM file, look at the symptoms of narcissistic personality disorder, and tell me that those couldn’t be a biography of Donald Trump himself.

That’s what we’re dealing with. It is a mental illness. Does it make him unfit to lead? A lot of people think so, but that would be up to a medical professional to fully give that diagnosis. I do not have a PhD, I will not issue my opinion on whether or not he should resign. I do think, for the most part, that it is hindering him, obviously.

Donald Trump needs to understand that when you’re in the highest office in the land, everything is your fault. That’s how it was with Barack Obama. Do you remember the Republicans? Everything that happened in this country and, honestly, all over the world, was directly the fault of President Obama.

The Black Lives Matter Movement, that was the fault of Barack Obama. Cops shooting unarmed black people, that was also somehow Obama’s fault. When he first came to office, dealing with the recession that George W. Bush left him, on day one, it was immediately Obama’s fault, even though we were still operating under that Bush budget.

Donald Trump won’t accept any blame for anything. Meanwhile, Obama got blamed for everything, including the things he had nothing to do with, and he took it in stride. He used it to make himself better and to try to make this country better. He didn’t sit there and whine on Twitter about people being unfair, the media being unfair, even when they were calling him a Muslim Kenyan who lied about his birth certificate. Both FOX News and Donald Trump himself made those claims, but he didn’t piss and moan and act like a child. He got things done, and that’s the difference between a real leader and what we have today.