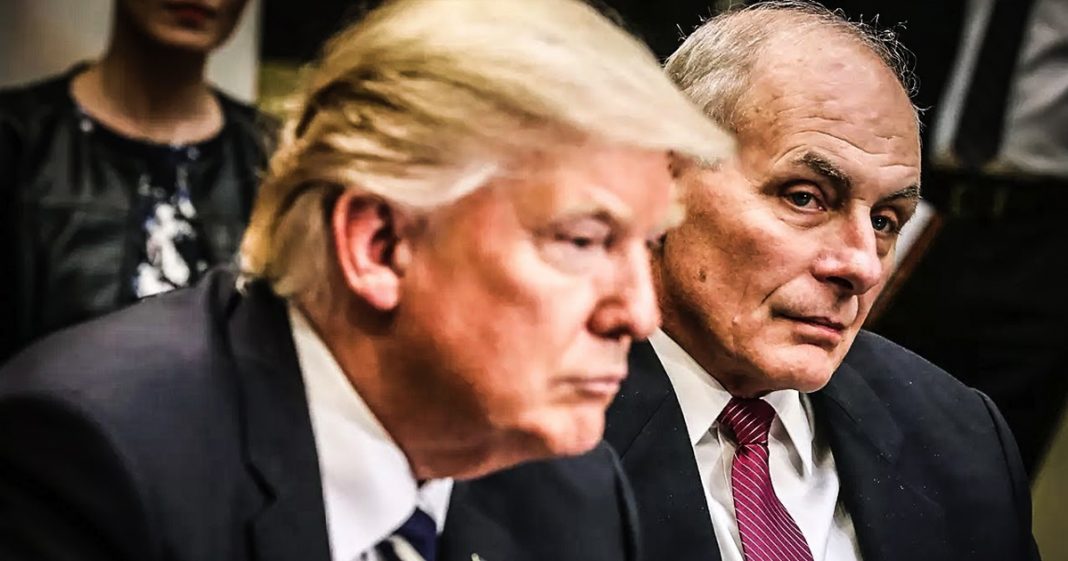 According to a memo sent out by Trump’s new Chief of Staff John Kelly, the staffers in the White House will have to run everything by Kelly before it reaches the President’s desk. This includes any news stories that the staff wants Trump to see. Kelly specifically mentioned that he wants to be able to control what news sources and items the President sees, perhaps in an attempt to reign him in and stop him from getting fired up over stories that aren’t even true. Ring of Fire’s Farron Cousins discusses this.

We’re starting to get signs that the new White House Chief of Staff, John Kelly, might actually be trying to rein in Donald Trump at least a little bit. Recently both Chief of Staff John Kelly and staff director Rob Porter both sent out memos to members of the White House staff and everyone in the Cabinet, explaining how the new process for giving information to Donald Trump is going to work. Basically, John Kelly says that, “Anything you want to give to Donald Trump has to be vetted by me first.” This includes information about executive orders Donald Trump wants to sign. John Kelly wants to make sure that we get agency input on these, and yes, it’s going to slow the process down, but it’s going to make sure that everybody has their input before it’s presented to Donald Trump.

Again, executive orders, any kind of military information, but most importantly, and the part that seems to be overlooked in the reporting on this, is that John Kelly wants any news articles that people want to give to the president, to go through him first. What Kelly is trying to do here, is limit the president’s access to real fake news. Not CNN or Washington Post or New York Times, but news sources like Fox News or Breitbart or Daily Caller. He wants to make sure that the president isn’t solely relying on those horrid news sources that consistently report lies, likes that the president chooses to act on, he basis policy around them. Remember when he saw that documentary on Fox News about a military strike that happened years ago? He was ready to go start bombing people because he thought it was a current event. John Kelly is trying to prevent the president from being so stupid, to put it in it’s simplest terms here.

Will that stop Donald Trump? Absolutely not. Donald Trump is still going to consume all of the Fox News and other fake news sources that he wants to, but John Kelly just wants to make sure that staffers are not feeding him this particular information. We have seen in the past, that staffers are handing Donald Trump the so called fake news stories, they’re more positive and they tend to paint the president in a better light and paint liberals in a very negative one, and that is what Donald Trump has based his entire presidency on.

John Kelly, to his credit, is trying to tighten things up a little bit, maybe make Donald Trump not so volatile and disliked among the American public. The latest polls out this week show that his approval rating has dropped to 34%. Again, the lowest that a president who is only seven months into their first term, has ever received in this country. At this point in his presidency he is the least popular president ever. John Kelly hopes to change that, but unfortunately, stopping the flow of fake news or getting more people to vet executive orders isn’t going to do that, because 90% of what people hate about Donald Trump is his brash, disgusting personality, and you can wall him off from Breitbart and Fox News all you want, but it’s not going to change the character of this man, and that is the thing that most people in this country have such a problem with.