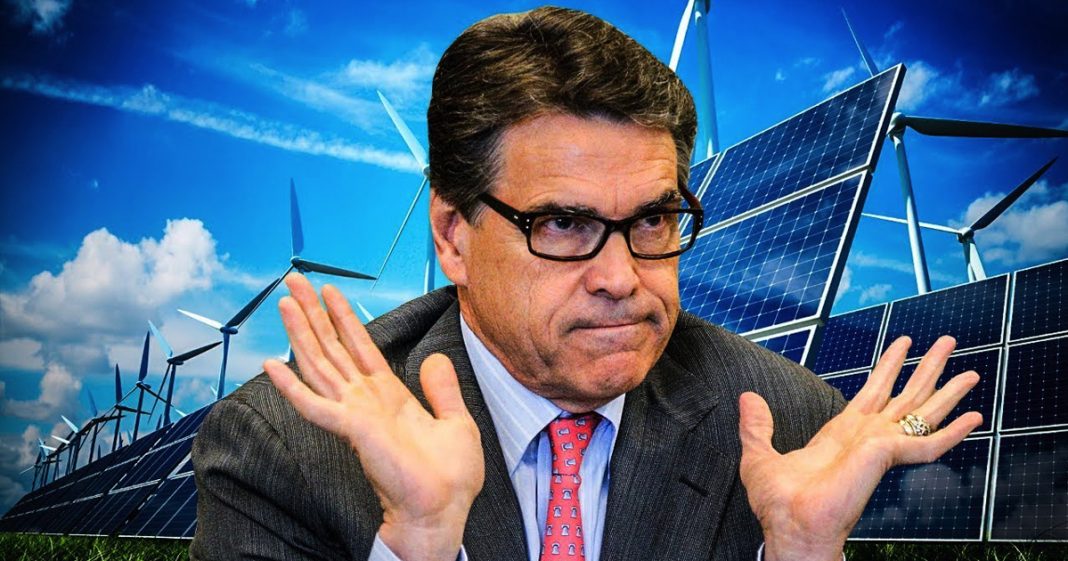 Rick Perry and the Department of Energy have been trying to rewrite a recent study on renewable energy and the U.S. power grid that showed renewable energy was doing great and growing at an exponential rate. But the fossil-fueled Trump administration didn’t want the public to see this, so they tried to rewrite the study and make renewable energy look bad, and they ended up making it look even better than before. Ring of Fire’s Farron Cousins discusses this.

A few months ago, a draft version of the Department of Energy’s energy grid study was released, and it showed that everything that the Trump administration and Republicans had been saying about renewable energy was completely false.

Renewable energy was not overloading our power grids. It was not taking up space that could be better spent on nuclear energy or coal firepower plants. In fact, that report showed that our energy grid today, even with renewable energy growing at an exponential rate, is stronger than ever.

Obviously, Rick Perry, the Secretary of Energy, along with Donald Trump and the other Republicans in the administration … They weren’t happy that this report showed how well renewable energy was doing, and how much market share was gaining, and how much stronger our electrical grid in the United States was because of it. So, before the final draft of this report came out, which was this past Wednesday evening, Rick Perry and his Department of Energy took it upon themselves to rewrite those flattering things about renewable energy and make the entire study about how horrible renewable energy is, and how it is killing coal, killing nuclear, and killing our electrical grid in the United States.

There’s just one problem. They didn’t delete all of the information that they wanted to delete, so the statements that they did take out, where they were saying that renewable energy was beneficial, that it was good for the power grid, and that the power grid was strong … They took those out. They took out the part that said that renewable energy is not killing coal or nuclear, and that renewable energy subsidies are not hurting those industries. But later on in the report, those points were echoed again, and I guess poor, little Rick Perry didn’t think to read through the whole thing. And so those statements got left in, directly contradicting what they had already taken out, and rewritten.

The bottom line is this: Rick Perry came from Texas. He was an oil guy. Oil put him in office. Oil funded his campaigns, and he thinks that he can go to be the Secretary of Energy, and just rewrite everything to make it look like renewable, solar, and wind are actually somehow hurting the United States, when in reality it’s the coal companies. It’s the oil companies. It’s the dirty energy polluters who are overloading our power grid, who are unable to keep up with demand, and who do not understand that the rest of the world is evolving, and the United States has to evolve with it.

Rick Perry is not evolving, and believe me, he needs to. But this little snafu with their report, where they tried to be sneaky and show the public that renewable energy is bad, just proves at how stupid they are because they are so dumb that they can’t even successfully sabotage their own paper, because they didn’t bother to continue reading the entire thing. That’s the level of stupid that we are dealing with with this Trump administration, and until we get them removed from office, it’s going to be more stories like this. It’s going to be more instances of pure, brain dead stupidity from people like Rick Perry and Donald Trump, because going full stupid is the only thing they know how to do.