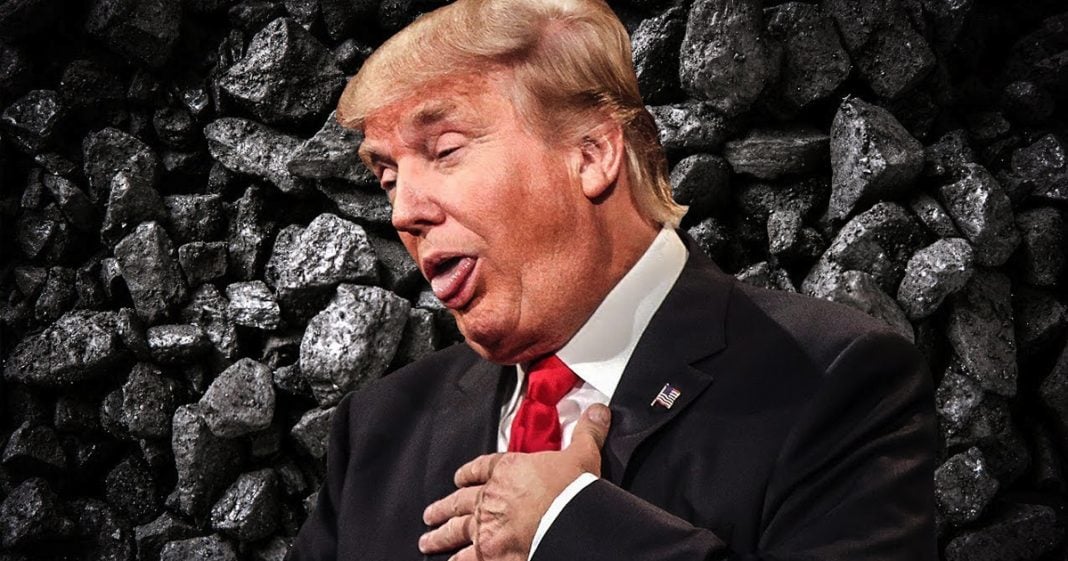 There were plenty of crazy comments from Donald Trump’s rally in Phoenix earlier this week, but one that got overlooked was the statement the President made that showed that he has no idea how coal works. He mentioned in his speech that “clean coal” is when workers take the coal and then clean it – He literally thinks that they sit there with a bucket of soap and water and scrub the dirt off the coal! Yeah, that’ll fix our emissions problems. Ring of Fire’s Farron Cousins discusses this.

Most of the talk centered around Donald Trump’s recent rally in Phoenix, has been about the fact that he went off script, off teleprompter, and just went into these unhinged rants about everything from the military to Hilary Clinton to John McCain to the Russian investigation. But buried in all of that insanity, was a very clear moment of pure stupidity and lack of knowledge on behalf of Donald Trump.

During that rally, Donald Trump somehow got on the topic of coal. Talked about how we’re building new coal mines or I guess what he meant was we’re mining new areas because you can’t actually build a coal mine. But that’s not the stupidest part. He said, “We’re getting out the clean coal.” Now for a little back story before I go further into what he said, clean coal is the talking point made up by the fossil fuel industry that refers to carbon capture and sequestration. It does not work. It is an unviable means of capturing the carbon emissions because once you capture them we actually don’t have anywhere to put them so it still releases just as many emissions, slightly better, still more than any other form of energy. That’s what clean coal means. Now, during that rally, get back to that, Trump said, “We’re getting out that clean coal,” and he said, “You know what that is. They take out the coal and they clean it and then we burn it.” Donald Trump, the President of the United States literally thinks that clean coal means we take the coal out, I guess we have a bucket of soap and water, the miners clean it, scrub it, get all of the, you know, nasty carbon emission off of it and suddenly it doesn’t release any emissions because we cleaned it.

Donald Trump like has said so many stupid things, not just since becoming President or since announcing his candidacy, but basically since he learned how to speak. But thinking that clean coal means we just wash it, that’s the dumbest thing I’ve heard from this man. That’s dumber than anything I’ve heard from George W. Bush and that was a man that could barely even speak the English language without inventing new words. Clean coal means that we wash it. I don’t even know where to continue with this because that is one of the dumbest things I have heard from a sitting U.S. President in my entire lifetime. But, to be clear, Donald Trump has made it obvious that he’s just gonna continue to double down on fossil fuels, he’s going to shut down renewable energy programs by starving them of subsidies, even though that’s sector’s growing twice as fast as the fossil fuel industry and providing cleaner, cheaper fuel for the United States, but, it’s because he doesn’t understand it for one and two he doesn’t care to understand it. But, if I were a business leader out there in the United States and heard Donald Trump made this asinine comment, I would think twice before ever doing business with this man.

People around the globe have access to this information of what Trump said about clean coal. Do you think that’s gonna inspire a lot of other countries to come forward and say, “I want to partner with you on energy programs. Oh wait, you’re President doesn’t understand basic terminology? Doesn’t understand how we get energy? Doesn’t understand what emissions are? Yeah, nevermind. Didn’t know you were being led by a four year old in an oversized suit.” ‘Cause at that point that’s what we got folks. I’m pretty sure that my children know more about the way the world works, about the way politics work, and about the way energy works than Donald Trump. At least my kids understand that burning things that release smoke and fire and emissions into the atmosphere is bad. Donald Trump thinks that all you have to do is rub it with a Lysol wipe real quick and suddenly we’ve got clean energy.