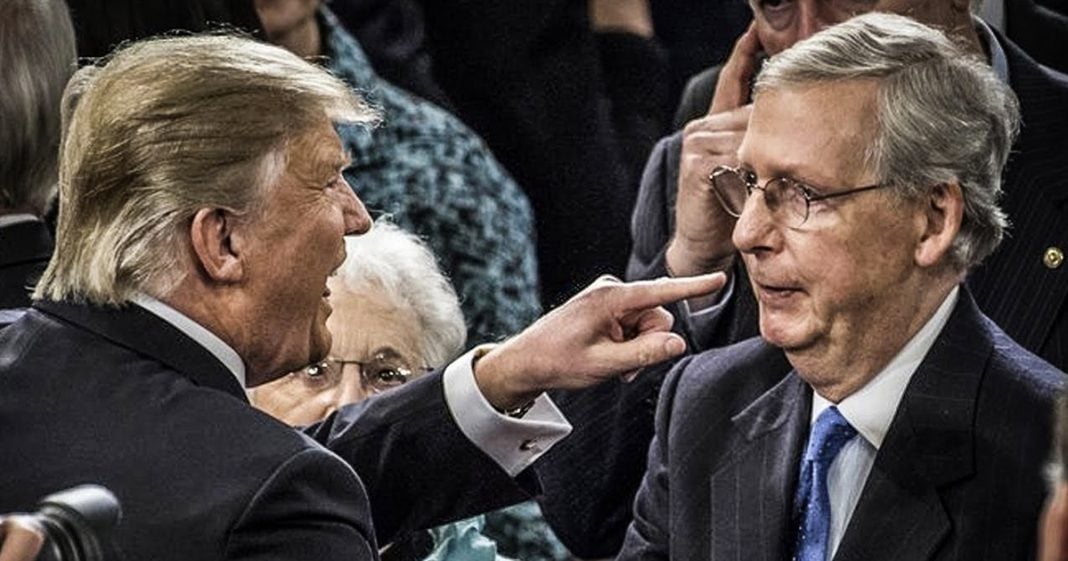 According to a new report by The New York Times, Donald Trump is absolutely apoplectic about the fact that Mitch McConnell has not stepped in to protect the President from investigations, particularly the investigations into the Trump campaigns possible collusion with Russia. But if what The Times is reporting is accurate, Trump could easily be looking at even more obstruction charges that could be filed by the special prosecutor. Ring of Fire’s Farron Cousins discusses this.

There’s an interesting little tidbit of news that’s been overlooked recently, mostly due to the fact that Donald Trump has been out there making a lot of stupid statements, but behind the scenes with Donald Trump and his relationship with Republicans in the House and Senate, things are actually far worse than Donald Trump’s public image. According to a new report by the New York Times, earlier in August what was supposed to be a fairly decent telephone call between Donald Trump and Senate Majority Leader Mitch McConnell erupted into quote “a profane shouting match between the two,” because Donald Trump is allegedly furious at Mitch McConnell because McConnell will not stand up and prevent Senate investigations into Donald Trump, his family, his campaign, and all of that mostly tied to the Russian collusion investigation.

Donald Trump once again wants somebody in Congress to step up and I guess technically hinder a federal investigation. We’ve mentioned in the past that Trump’s conversation with James Comey from earlier this year about let’s make this go away could very easily turn into obstruction charges against the president. If what the New York Times is reporting about this conversation between McConnell and Trump is true, that could also be construed as obstruction of justice just further adding more fuel to the fire that Bob Mueller is currently investigating. Donald Trump is clearly not a smart human being. I mean, at some point he’s got to wake up and understand that nothing really is private. I mean, any conversation you have, especially when you’re berating via private phone call or even on Twitter, which he’s been doing a lot of recently, attacking Mitch McConnell, yeah, people are going to start digging a little bit.

McConnell himself might even start talking about it, but the bottom line is that Mitch McConnell really has no authority to step in and squash this investigation. Sure, he could make these Senate investigations, if they happen, go away to an extent. He could hinder them. He could understaff them. He could make them take so long that by the time they finish Donald Trump could’ve finished two full terms as president, but he’s not going to do that. Furthermore, going back to Trump’s stupidity, Mitch McConnell’s literally the guy in charge of whether or not you get removed from office, and you’re going to publicly berate him on Twitter? You’re going to cuss him out over the phone in a private phone call? Bad tactic.

I mean, that shows a disturbing lack of intelligence to attack the one human being who holds the key to whether or not you get to finish out your first term. As we’ve talked about in the past, both the 25th Amendment and a general impeachment would require the Senate to vote on removing the president from office. When the Republicans control the majority, and Mitch McConnell happens to be the majority leader, really a bad move to attack him, call him weak, call him spineless, and cuss him out on the phone. Mitch McConnell might be your best friend in Washington, DC right now, Mr. Trump. If you continue to do this to him, to make him look like an idiot, to make him look spineless in front of millions and millions of American citizens, I can promise you he’s going to roll on you faster than Steve Bannon has over at Breitbart.