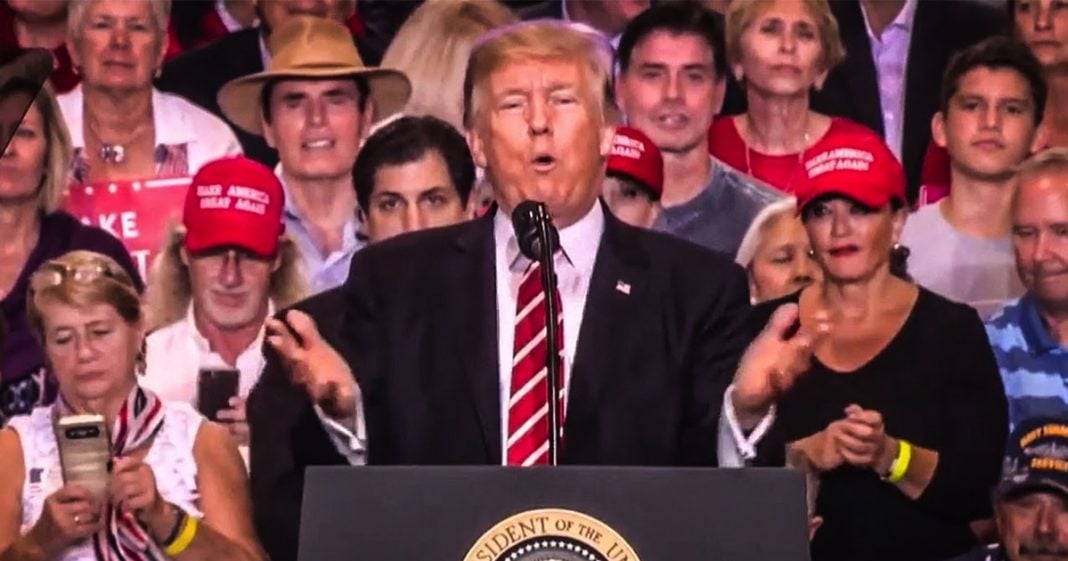 Donald Trump’s Tuesday night rally in Phoenix went off as expected – The President took the stage, spent time talking about crowd size, and then went off-script to start attacking the media, Hillary Clinton, the Russia probe, and even his Republican detractors. The speech contained no actual talk of how he’d achieve any of his promises, and as he droned on and on, the crowd thinned with hundreds of people leaving early. Ring of Fire’s Farron Cousins discusses this.

Last night, Donald Trump gave his much anticipated speech at a rally in Phoenix, where he pretty much did everything that everybody thought he was going to do. What’s really interesting about the speech is that it opened up with a couple different people coming on talking about unity, the need for us to denounce these racists that we’ve seen all throughout the country, so you actually kind of got the feeling at first like maybe, maybe this was going to be a decent speech.

It absolutely wasn’t. We’ve gone ahead and put together a clip of I guess what you would call Donald Trump’s greatest hits from last night. So let’s take a look at those for a second. Then we’re going to come back and try our best to explain what exactly this man is talking about.

Donald Trump: CNN is really bad, but ABC this morning … I don’t watch it much. But I’m watching in the morning and they have little George Stephanopolous talking to Nikki Haley. Right? Little George. And he talks about the speech I made last night, which, believe it or not, got great reviews. Right? They had a hard time. They were having a hard time because with soldiers we were somber, we were truthful, we were doing, we were saying things … and it really did. So he talked about it for, like, that much. Then he goes, “Let’s get back to Charlottesville.” Charlottesville!

And Nikki was great. She’s doing a great job, by the way.

CNN, CNN does not want its falling viewership to watch what I’m saying tonight, I can tell you. And do you ever notice when I go on and I’ll put out a Tweet or a couple of Tweets … “He’s in a Twitter storm again!” I don’t do Twitter storms. You’ll put out a little Tweet. “I’m going to be with the veterans today.” They’ll say, “Donald Trump is in a Twitter storm!” These are sick people. The New York Times essentially apologized after I won the election because their coverage was so bad and it was so wrong and they were losing so many subscribers that they practically apologized. I would say they did. They say, “Well, it wasn’t really that much of an apology.” Because they were losing so many people because they were mislead. And I figured this is great. And for about two weeks I got good coverage. Then they reverted back, and they’re worse than ever before. You know, it’s one of those … The Washington Post is terrible. I must tell you, Fox has treated me fairly. Fox treated me fairly.

I’m a person who wants to tell the truth. I’m an honest person, and what I’m saying, you know, is exactly right. Do the people in this room like Sheriff Joe?

Was Sheriff Joe convicted for doing his job? That’s what … He should have had a jury, but you know what? I’m going to make a prediction. I think he’s going to be just fine. Okay?

I won’t do it tonight because I don’t want to cause any controversy. Is that okay? Alright?

Okay, in all fairness, that was not necessarily all of Donald Trump’s speech. In fact, those clips were only taken from about the first 20 or 25 minutes of Donald Trump’s 72 minute speech. All of that just from one third of the actual speech! And honestly, I don’t even know where to begin with all of the insanity that just came out in that short clip.

But let’s start with the most obvious. Right? Sheriff Joe! Oh, yeah. Everybody in Arizona loves Sheriff Joe, as long as your skin is a shade of pasty white. Right? And the reason Donald Trump doesn’t want to announce he’s going to pardon this jackass in front of this crowd is because we’re at a time right now when race relations in the United States … really at a bad place. And pardoning this very racist sheriff is not going to send a very good message to, again, non-white people as to whose side your really on. That’s why Trump doesn’t want to do it there. He’s a coward. He’s afraid something’s going to happen to him if he announces that, even though he pretty much announced it.

Now let’s go back to the beginning. Okay. “Little George Stephanopolous”. Rather than attack him on fact, rather than go after what he says and try to refute it, Trump does what he does best and reverted to childlike insults about somebody’s personal appearance or physical stature. Let me tell you something, Mr. President. When you have really bad hair, when you’re overweight and have tiny hands, probably shouldn’t be making fun of other people’s physical appearance. I know because I fall into that same category with you, buddy. Stop picking on people for the way they look! If you do not have an intelligent argument to come up with to counter what they say, then just leave it alone. The majority of people in this country do not like seeing you engage in this kind of behavior. And to be honest, it should be beneath the behavior of a President of the United States, and anyone who disagrees with that probably shouldn’t be allowed to have an opinion on American politics!

Furthermore, the fake news. The fake news! Constantly with the fake news and CNN and the failing New York Times that’s doing worse than ever, according to Trump. Subscriptions for the New York Times are actually at a high right now, in case you didn’t know that. People enjoy reading about how horrible you are. New York Times is doing better than ever by all possible metrics, yet your low information voting base doesn’t seem to understand that, because as long as it comes out of your mouth, well, it must be true. The people in that audience who constantly broke into chants of either “USA! USA!” … one point they broke into chants of “Lock her up!” when Donald Trump mentioned Hillary Clinton. Why her name came up, I don’t know. And then there was one time when Donald Trump began attacking the two Republican Senators from the state of Arizona, and somebody yelled out that John McCain … I don’t know if they specifically said he should die or that he should be made to be dead by some means, but it was absolutely disgusting behavior that the President did not denounce.

Meghan McCain had to come out after the speech and talk about how deplorable it was that somebody would say that in that crowd about her father, and that the President wouldn’t even respond to it because he’s a coward.

Last night, once again, further showed us that Donald Trump neither has the temperament nor the intelligence to be the President of the United States of America. That was the same speech that you would expect from a whiny, pissy, 15 year old teenager in the United States. One that’s led a privileged life. One that might be suffering from affluenza.

Donald Trump also, in this video clip that we just showed, made himself the victim of Charlottesville. He was the victim! His response wasn’t good enough! He just can’t please anybody! Won’t somebody take pity on our poor little President, Donald Trump? That’s not how it works. When you come out and defend neo-Nazis, yeah, you’re going to piss people off, and rightfully so! Stop acting like everybody’s out to get you. We’re not! Trust me. All we’re trying to do is hold you accountable and point out the damage that you are causing to this country. That does not make us fake news. In fact, it actually makes us the opposite of that.

So you go ahead, you live in your alternative reality with all of your supporters, who happen to be dwindling. And honestly, by the time this speech ended, hundreds of people had already walked out because they were tired of listening to this nut job. And that should be a good kind of reminder of where Donald Trump stands in the polls, too. Started off great, but the more he talks, the more he goes on and on, the more people simply don’t want to hear it anymore.