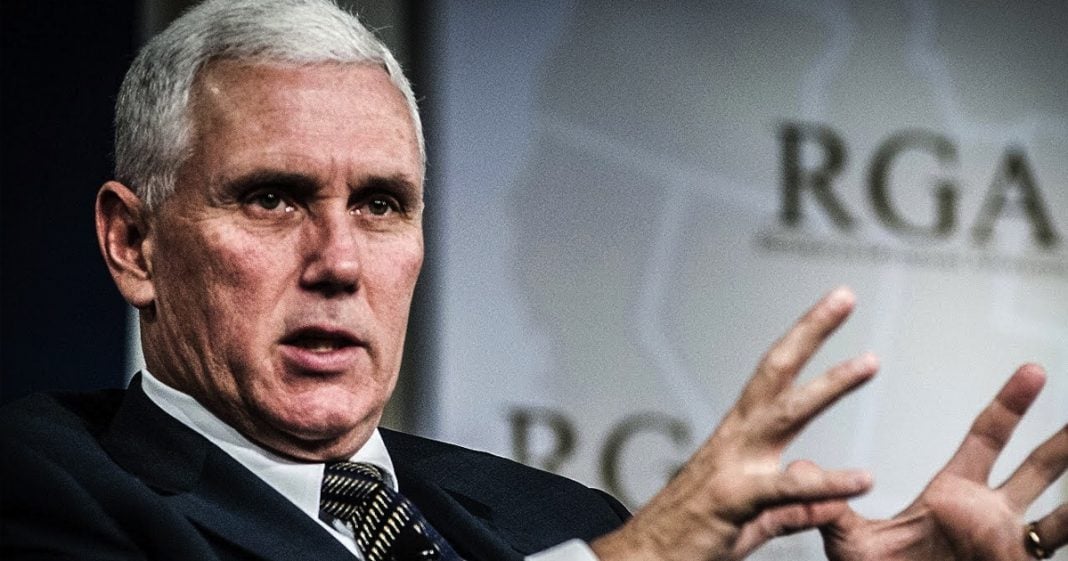 Perhaps in an attempt to prove that he can be just as awful as Donald Trump, Vice President Mike Pence said recently that he is actually in favor of having even more confederate statues placed throughout the country. There is no more debate on this issue – we know exactly what these monuments and the people being memorialized represent, and that’s an era of American history that we should not be honoring. Ring of Fire’s Farron Cousins discusses this.

In an attempt to prove that his boss, President Donald Trump, is not the only disgusting member of the Trump administration. Vice President Mike Pence went on Fox and Friends Tuesday morning, to talk about this poor, pitiful South, the Southerners, losing all these wonders-ly beautiful monuments to slavery. Pence said that he doesn’t want to see any monuments taken down; in fact according to Mike Pence we should be building more monuments. Now he did go on to clarify that, ” We’ll keep the ones we have, maybe make a few more of those, but we should also probably throw in some great civil rights pioneers and things like that. Just more monuments, basically, but don’t turn down the racist ones at all. Leave those please, leave those.”

Here’s the thing that everybody needs to understand about this entire confederate monument controversy. Those monuments are the participation trophies of the South, for the civil war, and aren’t Republicans supposed to be against participation trophies? Shouldn’t those go? Why would they want to memorialize losers, because that is what they are, because they claim its part of our heritage? No. You want to not erase history? Go read a book. How about that? How about you study up a little bit, then history is not forgotten. We don’t need monuments to racist losers sitting in our towns to remind us of how horrible those people were. How horrible the United States South was at that time, and to remember that black mark in American history. Most of us went to school. We learned about that.

The textbooks that haven’t yet been changed by crazy Christians in Texas, still teach us that. In case, you didn’t know, “Yes, the crazy Texans are actually rewriting their text books, to show that United States slaves were treated very well and that they were very happy and that they loved their lot in life.” That is how you erase history folks, not by tearing down a racist monument. By literally changing history in the text books that we teach our children, that’s what Republicans are doing. That’s going to cause a hell of a lot more damage than tearing down a statue or a monument. That’s the way we remember that part. We learned about it. We understand it, and we try to prevent the same mistakes of the past.

We don’t have to walk by a statue of a jackass on a horse to remember that. If you do, then there’s probably no reaching you anyway. Furthermore, for the people that says, this is about Southern heritage, then why are some of these monuments in California? Why are there some in Connecticut? Why are there some in Massachusetts? It’s not about Southern heritage you idiots; the location of these monuments across the country in areas that aren’t south proves it. For those people who want to wrap themselves up in the confederate flag, well I have news for you. The confederacy used many, many, many different flags. That one that you see, the stars and bars on the back of a lot of cars down here in the South, was actually only in use I believe for less than two years, and it was one of the battle flags.

It does not represent the South; it represents the fight to preserve slavery. Educate yourselves folks. That’s the best way to make sure that history doesn’t get erased, and as far as Mike Pence is concerned, we don’t need to build more monuments. We don’t need to preserve the ones we have. We need to tear them down and stop letting these white supremacist go out there and look at these leaders, or I’m sorry, failed leaders; the people who lost battles; the people who lost the war. Stop letting the white supremacists go up to them and say, “I want to be just like you.” They’ve already lost their battle. It’s time to take down their participation trophies.