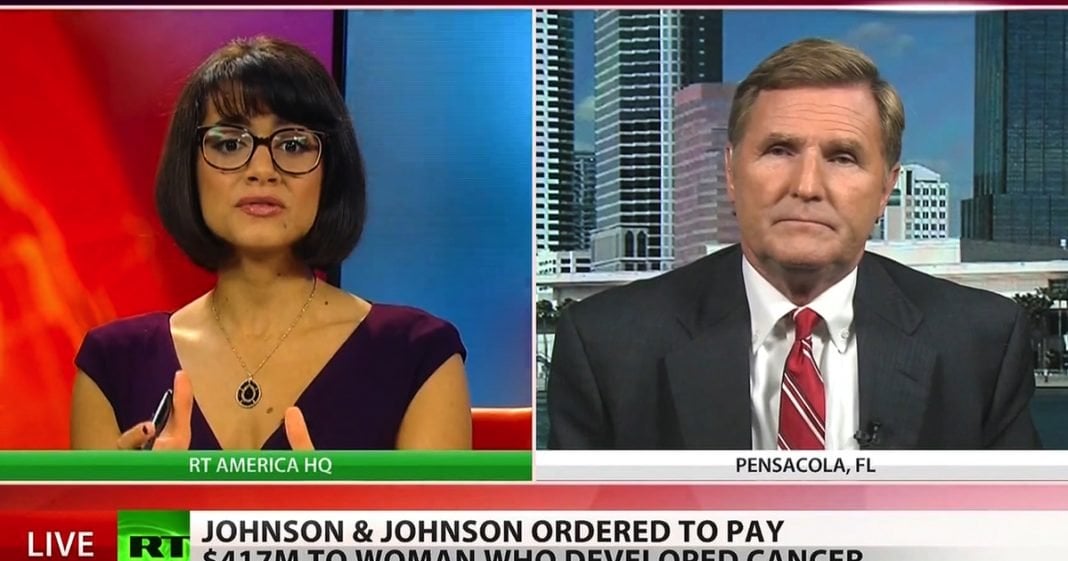 Via Rt America: A jury in California has ruled against multinational pharmaceutical giant Johnson and Johnson in the costliest decision to date for the company. J&J now must pay $70 million in compensatory damages and $347 million in punitive damages, after the jury sided with California resident Eva Echeverria, who says she developed ovarian cancer through her use of Johnson’s talcum baby powder for feminine hygiene. RT America’s Mike Papantonio, host of America’s Lawyer, explains how big corporations deliberately avoid warning consumers of cancer risks in their products.

Anya Parampil: A jury in California has ruled against multinational pharmaceutical giant Johnson & Johnson in the costliest decision to date for the company concerning it’s talcum powder products linked to cancer. J & J must now pay $70 million in compensatory damages and $347 million in punitive damages after the jury sided with California resident Eva Echeverria who says she developed ovarian cancer through her use Johnson’s baby powder for feminine hygiene. Echeverria’s lawyers say J & J encouraged women to use the product despite knowing studies show it can lead to ovarian cancer and death.

For more let’s bring in host of America’s Lawyer Mike Papantonio. He’s also author of the book, Law and Vengeance. Mike welcome to the show, thanks for coming on today. Can you just start by explaining as a well respected trial lawyer, someone who spent decades, over three decades fighting corporations in court, explain the significance of this hefty price tag and your reaction to the jury’s decision.

Mike Papantonio: This is a monumental problem for Johnson & Johnson. At this point five separate juries have listened to weeks of testimony and reviewed document after document that coming directly from the file cabinets of Johnson & Johnson, each one of those juries and this is extremely important, they all found the same thing. That Johnson & Johnson failed to warn consumers about the link between talcum powder and the increased risk of ovarian cancer. Apparently 22,000 Americans are diagnosed with ovarian cancer every year. The autopsy in the Johnson & Johnson case though, it shows that women have the presence of talc inside the ovarian tumor. So there’s no guesswork here. They actually do the pathology, they find the talc right inside the tumor.

Still Johnson & Johnson’s refused to create any type of legitimate warning system. They still are not warning women who should have the choice to make an informed choice about whether they’re willing to accept this risk or not. You don’t even need to use this talc baby powder, there’s all kinds of alternatives. And what’s so important is, in 1971 Johnson & Johnson had way more than enough information to begin asking questions about cancer and their talc body powder. 1971 their own scientist discovered particles of talc embedded in ovarian and cervical tumors. They’ve known about it a long time, the juries get furious about the fact that they put these women at risk. Ovarian cancer is a killer and these folks know it and they kept it on the market anyway. In 1982 amazing, that showed … I’m sorry go ahead.

Anya Parampil: As you explain the most damning aspect of this case is the fact that J & J knew about the effects of talcum powder on women’s health yet marketed it to women anyway. Why would the so called family company make such a decision?

Mike Papantonio: It’s all about money. Here’s what they do. They calculate how many people are going to die. How many people are we going to have to pay for their losses? And they calculate well were making X billion dollars per year, so they do, it’s a mathematical exchange. They figure out how many cases are they going to win in trial, how many they going to win on appeal, what will the Supreme Court do, what are their chances of being able to work their way through this with no losses. But it is, it’s absolutely a financial risk benefit analysis that we see time after time with these companies.

It’s not just J & J, it’s all of these pharmaceutical companies. Understand when they have the product that kills people, all they have to do is do a quick number run, find out, do we come out ahead by killing people or do we come out ahead by pulling the product off the market or making people aware that the powder that they’re using on their body can kill them by way of ovarian cancer. So there’s no guesswork here. It’s no surprise that these juries are furious about what they’re finding here.

Anya Parampil: J & J’s attorneys were able to argue the Food and Drug Administration has not determined their talcum products are carcinogenic. Can you talk about the government’s responsibility in this case and others like it involving major corporations?

Mike Papantonio: We see the FDA, the EPA, the SEC and these regulatory agencies all the time bought and paid for by corporate America. This is another example of it. The FDA, anybody looking just reviewing the documents that come directly from the file cabinets of J & J, just taking the time to sit through a jury trial and listen to the testimony that comes out, that’s all they’d have to do to do their job. But they typically don’t do their job because they have other reasons. What we typically see is we see people working with the FDA, day one and then day three they’re working for the very industry that they’re supposed to be regulating. It’s simply is a passage of money again.

The idea that regulators are looking out for us is the biggest myth that we’ve promulgated in this country. Time and time again we see situations just like this. FDA letting Johnson & Johnson literally kill people with ovarian cancer and taking no action and you know what? The worst thing about it is the mainstream media, corporate media let this happen for so long. Why? Because Johnson & Johnson, they’ve had this story a long time, this story’s been out there a long time. But corporate media allowed this to happen because of advertising.

Anya Parampil: We’re unfortunately out of time. Of course viewers know if they want to get some those cases which aren’t covered by mainstream media, they can watch your show, America’s Lawyer, every Wednesday night. Mike Papantonio thanks so much for coming on today.