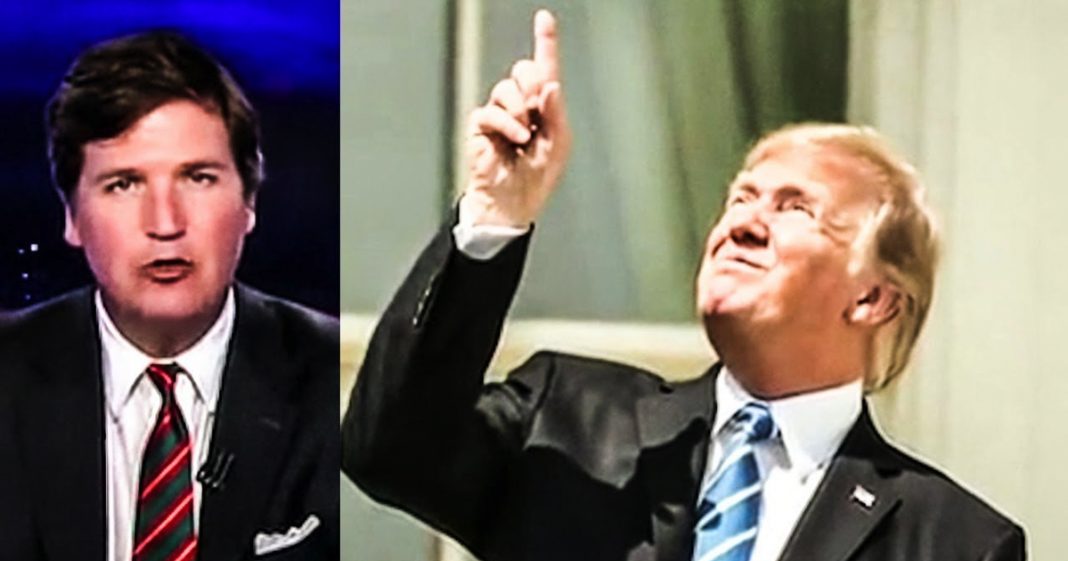 Tucker Carlson at Fox News sure does love Donald Trump. And to prove it, he proclaimed that Trump’s decision to ignore safety warnings and look directly at the sun during Monday’s eclipse was one of the most “impressive” things a president has ever done. Carlson might have been joking, but that doesn’t excuse both his and the president’s infantile behavior. Ring of Fire’s Farron Cousins discusses this.

Donald Trump on Monday during the solar eclipse did what everybody predicted Donald Trump would do Monday during the eclipse. He looked directly at it without any eye protection. Again, something that we all pretty much predicted, and after only about a solid week’s worth of warning from scientists and doctors to make sure you wore eye protection, it was pretty obvious Donald Trump was going to do what he does, not listen to people who know better than him, and look directly at it several times before finally putting on his glasses. Now, believe it or not, Tucker Carlson on Fox News actually decided to talk, albeit briefly, about Donald Trump’s decision. Take a look at what Tucker had to say.

Tucker Carlson: Even the president saw it, but in a move that is not a complete surprise, he looked directly at the sun without any glasses, perhaps the most impressive thing any president’s ever done.

All right, let’s start off by saying very obvious to most of us that Tucker Carlson, I guess, is being sarcastic or that he is somehow joking. I do not believe Tucker Carlson was actually trying to say this was the most impressive thing a sitting US president has ever done. That being said, what an odd choice of words to make a joke out of it, the most impressive thing a president has ever done. When you start to think of it in those terms, it makes you wonder whether or not this man actually was joking. We have seen him defend some of the worst behavior of Donald Trump and try to deflect from the big stories about Donald Trump, so it wouldn’t be a surprise if Tucker Carlson did come out and say, “No, I was being totally serious. I agree 100% that this was impressive.”

But I’m going to give him the benefit of the doubt and go ahead and assume that he wasn’t being serious when he said that this was impressive. For those of you who may not know, a recent interview on salon.com had a doctor explaining why it’s so dangerous to look at the eclipse. It’s because your eyes get used to the dark, your pupils dilate, suddenly sunlight comes back, and you can burn your eyes pretty severely causing severe damage. Now, Donald Trump again, this wasn’t just a humorous incident of him not wearing the glasses or wanting to look up and see it with his own eyes. It once again goes against everything that Donald Trump … Well, goes in favor, I guess, of everything Donald Trump has done since going to office, which is not listening to people smarter than himself.

Now, it’s one thing to look directly at the sun when you’re told not to, but what about when it comes to other things, like foreign policy, domestic policy, climate change policy, healthcare policy? Donald Trump does the same thing. He has people who tell him the right path forward, the way that things should work, and he won’t listen to them. Yesterday’s eclipse was less about Donald Trump damaging his eyes and more about giving us a glimpse into what kind of person he really is, because as soon as you tell him not to do something, that’s the only thing in his mind that he can think that he wants to do. It is no different than the behavior of a small child.